Download the dedication program, including the timeline of headquarters office buildings.

n July 4, 2018, less than two years after a groundbreaking ceremony for the new Apostolic Faith world headquarters office, the building was formally dedicated for God’s work. The service began in the campground tabernacle with the junior orchestra playing “He Is Exalted” and “Star Spangled Spectacular.” A young ladies’ ensemble sang “Still Feelin’ Fine” and then Reverend Sam Ajayi, Director of South America and Australia Work, led the congregation in a special prayer for the future work of the Apostolic Faith organization. The last music special was Ashley Morgan singing “Bless This House.”

Dedication comments were given by Superintendent General Darrel Lee, who recounted the distress felt when the campground East Chapel was destroyed in a fire in February of 2014. He said the Lord has granted us “beauty for ashes” by turning the fire into an opportunity to build a beautiful new office. Reverend Lee also quoted the words of Reverend Loyce Carver, the former General Overseer of the Apostolic Faith organization, when he spoke at the groundbreaking ceremony of the Fifty-Second Avenue headquarters building on July 20, 1979. Reverend Carver had declared, “The function of this office is to send out to the whole world the product of meetings held here—sermons that are preached and testimonies that are given—that God’s name might be glorified. These are typed and edited, printed, and distributed into all the world, free of charge. It is the same Gospel that you hear when you come to a meeting, but we try to put wings to it so it will go everywhere.”

Just as God blessed the efforts of our forebearers, we depend upon Him to bless the labors of the current and future generations until Jesus returns.

Reverend Lee emphasized that this remains the charge of the organization today, but the office staff will strive to accomplish that goal in a more widespread manner yet by taking advantage of modern technology. He also said that just as God blessed the efforts of our forebearers, we depend upon Him to bless the labors of the current and future generations until Jesus returns. He declared, “We continue to earnestly contend for the faith which was once delivered unto the saints!”

Following the comments from Reverend Lee, the congregation was dismissed to the front of the headquarters office for the dedication prayer and ribbon-cutting ceremony. A prayer was offered by Board Member and Corporate Treasurer John Musgrave, who gave thanks for God’s provision of a new office building, expressed the collective desire for it to be wholly dedicated to God’s work, and asked His blessing on the efforts of the Apostolic Faith organization.

Once everyone had assembled in front of the new office, three scissor carriers delivered scissors to three ribbon cutters. The carriers were three-year-olds Daisy Andersen and Charity Hinkle, and four-year-old Anhaiya Larrechea, who all have a rich heritage in this Gospel. Daisy’s great-great grandparents Earnest and Lowana Phillips received Apostolic Faith papers in 1910 while living on the prairies of Kansas, and subsequently moved to Portland to attend the church. Charity’s great-grandmother Audrey Hinkle was invited to special meetings held in Southern Oregon by members of the Medford Apostolic Faith Church, and was saved soon after. Anhaiya’s great-great-grandfather George Friesen was saved at the Apostolic Faith Church in Dallas, Oregon, and her great-great-grandmother Lena Young was saved shortly after receiving an Apostolic Faith paper from a neighbor in Medford. The three ribbon cutters were Karen Barrett, Cheryl Paulsen, and Gary Wolfe, who each began working at the headquarters church office when it was located at Southwest Sixth and Burnside, and will continue working in the new building. Combined, they have worked for the headquarters office for over 130 years! These three also have rich heritages in the Gospel that go back to grandparents who joined the Apostolic Faith Church in the 1920s and 1930s, and now they have their own children and grandchildren in the Gospel.

After the three girls carefully carried the scissors to the cutters, Reverend Lee announced, “We dedicate this building in the name of the Father, and of the Son, and of the Holy Ghost,” and the ribbon was cut! Soon after, a youth brass ensemble began playing “Glory Bound,” and the audience was invited to do a walk-through of the new office. Everyone who toured the building could see that after the 2014 fire, God has given the Apostolic Faith Church beauty for ashes, and we pray He will be greatly glorified through the work done in the new office. 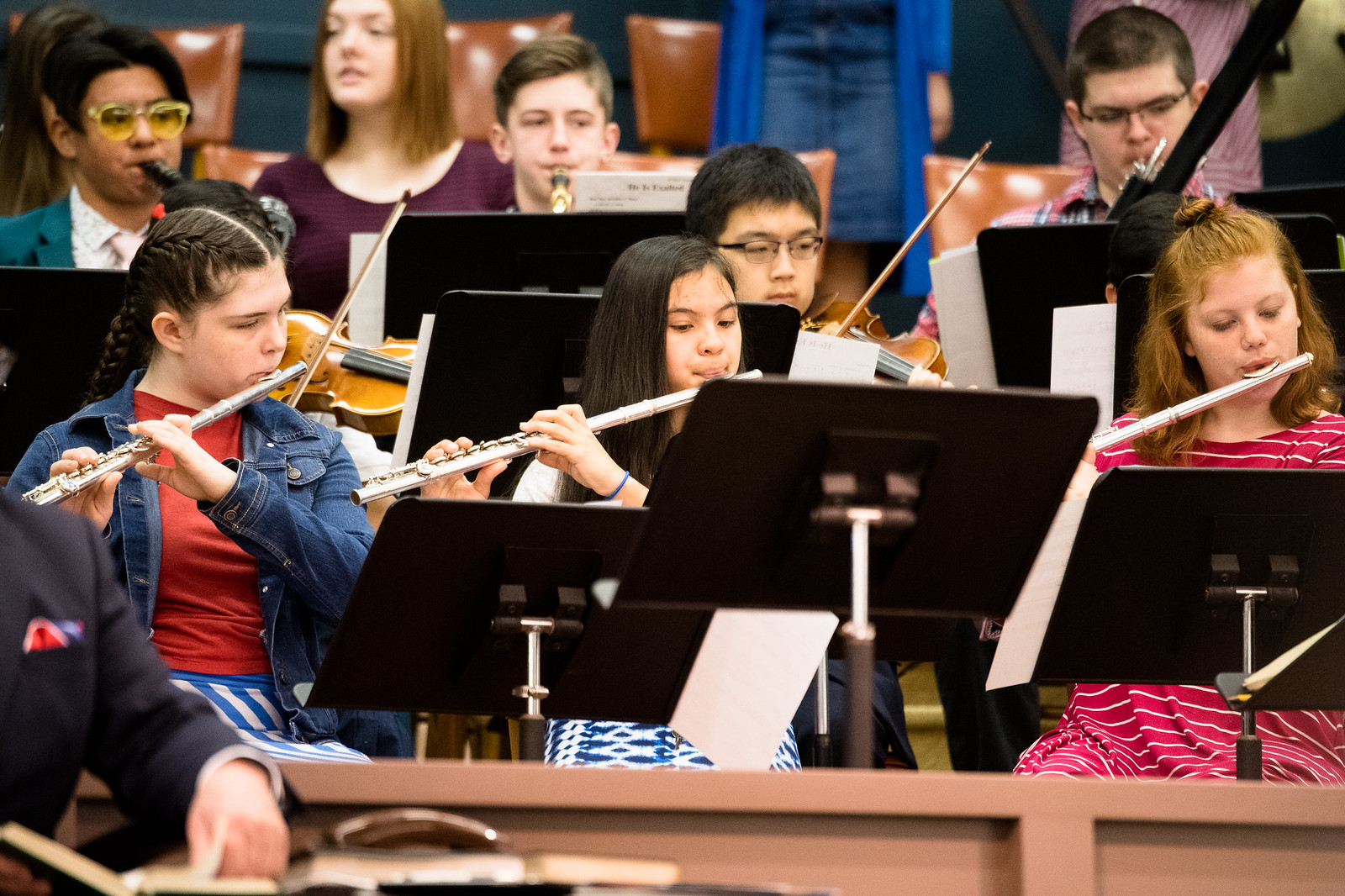