An Abounding Work in Angola

What began humbly during the Angolan civil war has resulted in thousands embracing the Gospel.

The 2019 Angola camp meeting was held August 18-25 in Huambo. A campground there houses the headquarters church for our Angola work, which began almost thirty years ago and now includes over three hundred congregations.

The group was received at the airport by Antonio Castilho, the Angola District Superintendent (read his testimony here), and several of the provincial leaders. As they exited the building, they were further greeted by brethren singing welcome songs in Portuguese, the national language of Angola.

At the campground, another warm reception awaited the team. Between four and five thousand saints had already arrived, and many lined the main road waving and singing as the foreign visitors approached. A short introduction service followed, and they could not have felt more welcome!

That afternoon, a workers’ meeting was held with the theme of “Unity.” Also, a Sunday school workshop was given by Tawona Rusere, the Southern Africa Sunday school superintendent, to introduce the Apostolic Faith curricula of Primary Pals, Answer, and Search. This was in preparation for the next day, when the Angola churches would begin using these materials for the first time.

The opening day of the camp meeting began with a Sunday school general assembly, and then everyone disbursed to individual classes. Afterward, a tour of the campground buildings included the main church, which seats two thousand, a larger church currently under construction, a tabernacle, several classrooms, a kitchen, and a dormitory.

The morning worship service was held in the tabernacle, which accommodates about three thousand, and every seat was filled. During the service, three board members and five provincial overseers were ordained. The sermon reflected the camp theme of “The End Times and Rapture” while focusing on the Gospel invitation that is extended to all. During the altar service that followed, nearly one hundred who needed healing were anointed and prayed for.

The afternoon and evening services featured inspiring music and testimonies. Later in the week, after conducting a music seminar, Reverend Calhoun commented about the music, “A highlight of the camp meeting has been how the choir and congregation sing from their hearts with tremendous energy.” The sermons continued the focus of the camp theme, stressing the urgent need to be ready for Christ’s soon return.

As Sunday came to a close, Reverend Musgrave reported, “Every service ended with a rush to the altar area, which did not begin to accommodate the numbers. This left many to pray where they were seated, and they did pray!” It was a great start to the camp meeting, which concluded a week later with 320 being baptized in the Cuando River.

Mouse over the image to click through an album of photos from Angola Camp Meeting 2019. 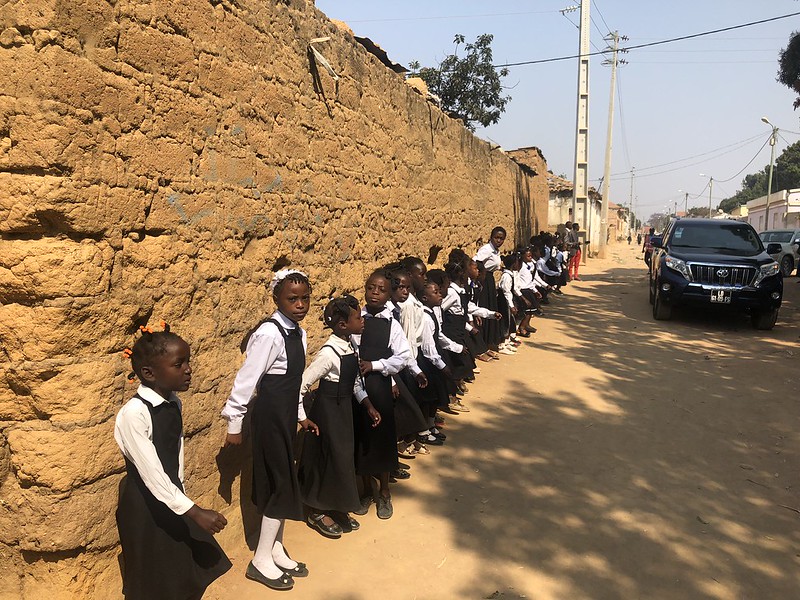 A History of the Angola Work

During the camp meeting, Reverend Castilho gave the visitors a tour of the campground and surrounding area, which included the remains of the original Apostolic Faith church building in Angola. He relayed the history of the work, saying that in 1990, after having previously found an Apostolic Faith tract, he began leading a group under the doctrines taught by the Apostolic Faith while corresponding with the Portland headquarters.

The people in Portland encouraged him to visit our Western and Central Africa headquarters in Nigeria for guidance, and in 1991, he attended the camp meeting at Lagos, and then stayed on for three months. During that time, he received the experiences of sanctification and the baptism of the Holy Ghost. When he returned to Huambo, construction began on the first church.

At that time, the country of Angola was divided in a civil war. The war had begun immediately following the nation’s independence from Portugal in 1975. On one side of the divide, Communist leaders were supported by the Soviet Union and its allies, and on the other side, an anti-Communist movement was supported by the United States and its allies. The war continued until 2002, resulting in more than half a million deaths and one million internally displaced people.

At one point during the war, the church property was used as a camp for those forced to leave their homes, and accommodated more than five thousand people. This provided an opportunity for the Gospel to be shared and for it to spread.

Another opportunity came when Angolans fled to refugee camps in neighboring countries. In the Democratic Republic of the Congo (DRC) and Namibia, many came into contact with Gospel workers from the Apostolic Faith and were converted. When the refugees returned home to Angola, they became Gospel workers themselves, giving rise to the expansion of the work.

The work also grew as leaders of other churches compared the doctrines taught by the Apostolic Faith with their own and realized they were teaching something false. Reverend Castilho said that many times he was asked to send Gospel workers to teach the true doctrines, and did so as much as possible.

One of the biggest challenges in establishing the work in Angola was communication with Africa district headquarters churches and Portland due to the language barrier. However, God made a way in every instance. For example, some of the young people moved to Namibia to pursue an education. When they returned, they became very helpful in translating letters and publications. Now a team translates all church materials as well as communications between Reverend Castilho and the other leaders.

Registering the church was another challenge. It needed to be registered as the “Apostolic Faith Church affiliated with the United States” to distinguish it from another organization of the same name. As Angola was under Communist rule and had no diplomatic relations with the United States, this designation brought suspicion. However, the Lord undertook, and after much paperwork and waiting, the church was registered.

Travel into Angola was difficult during the war, but visits were made to believers from Apostolic Faith delegates of the DRC in 1998 and 2000, greatly strengthening the work. In addition, Reverend Castilho made visits to the Namibia refugee camps where he was able to meet with brethren from Zimbabwe and receive encouragement. After the war ended, an enthusiasm among the congregations to spread the Word of God, as well as tools for evangelistic outreach, such as camp meetings and the “Jesus” film, were effective in bringing many into the Gospel.

In April of 2010, Reverend Gumbo led a team from the Zimbabwe headquarters to Angola and reported, “As we were driving along the road, signs of devastation from the war were everywhere. In every village, buildings had been bombed and were in a state of disrepair. Yet, as we approached Kuito, there was a great crowd of people waiting. They asked us to disembark, and we walked on foot to the church, accompanied on all sides by brethren singing. The church building could not accommodate the number, and a tent had been set up outside. However, it too seemed small as the people stood in the open welcoming us. The choir sang such sweet melodies and the Spirit of God was felt in our midst.” At the close of the trip, his team was thrilled to report that despite the hardships endured, the work in Angola had grown to include over three hundred churches.

In 2015, a law went into effect that threatened the existence of our Angola church, but the Lord has used it for good. The law required church organizations to prove a membership of at least 100,000 (the number has since been lowered to 60,000) or be closed and forfeit all assets to the government. Organizations that could not meet the threshold were to form coalitions and seek registration as a group. Our Angola congregations joined a coalition, and through this process, many other churches have come to know about the Apostolic Faith and have sought to become part of our organization. In Huambo alone, Brother Castilho meets weekly with fifteen church leaders to explain our beliefs and practices, and ascertain if they are in agreement. Another positive outcome has been that the president of the coalition has come to embrace the teachings of the Apostolic Faith and is using his position to encourage all of the churches in the coalition to do the same.

It is truly amazing what the Lord is doing in this war-torn country.

Click below to watch a compiled video from Angola Camp Meeting 2019.

An Abounding Work in Angola