It is no longer required to sign up to attend services in person. We will open our overflow rooms and use all of the balcony area to allow sufficient space for distancing, and will monitor the capacity levels and make further adjustments as necessary.

For those able to attend, please maintain a distance of at least six feet from those with whom you are not in contact outside of our services. Following this distancing measure is the only way we will be able to continue gathering. We also request that all who attend wear a face covering while coming and going to their seats, with exceptions for children under age five and those who cannot wear a face covering due to a health condition. Those who have had cold or flu-like symptoms in the last twenty-four hours should stay home. Those who have tested positive for COVID or been in contact with someone who tested positive should not attend services until their CDC recommended quarantine period is over.

All services will be streamed live (see the service schedule below) through our Media Center page and our YouTube channel.

Although the world headquarters office is closed to visitors for now, some staff and ministers are present to take phone calls and respond to mail. If you are in need of prayer in this difficult time, please email us at info@apostolicfaith.org and we will pray for you.

Visit us at 5601 SE Duke Street in Portland, Oregon.

We are a traditional, Bible-believing church, committed to upholding the Gospel of Jesus Christ. Our services are a time to worship God through music, be encouraged by testimonies of God working in lives today, and hear practical, relevant, Bible-based sermons.

We hope you can visit us at 5601 Southeast Duke Street in Portland. Our regular service schedule is given below and more events are listed on our calendar. Sign up to be notified by email about upcoming special events and schedule changes.

Please note: our facilities are not available for rent until further notice.

The Fellowship Lodge, Gym/West Chapel, Nursery/Annex, Church Chapel, and Church Sanctuary are available for private use by Portland congregation members for events such as birthday parties, bridal and baby showers, weddings, anniversary celebrations, reunions, recitals, etc. This is done on a first-come, first-served basis, subject to availability and pastor approval.

Notify Me of Future Special Events

Notify Me of Portland Schedule Changes

Music has always been a special part of the Apostolic Faith Church.

We enjoy music from a full choir and orchestra every Sunday, and our annual Easter Concert, Midsummer Concert, and Christmas Concert are highlights of the year. We also frequently include other special musical events on our calendar, all free of charge, and we welcome anyone to attend.

In addition, we have many opportunities for our youth to develop their musical talents. They are encouraged to join our junior and youth orchestras and choirs, and are often invited to participate in special musical events.

It’s always good news when the family of God is together.

If you are unable to join us in person, visit our news page to read what happened at our recent services and events.

"Let thy heart cheer thee in the days of thy youth."

Our young people get together frequently for youth meetings, Bible study sessions, and simply having fun with friends. We would love for you to join!

Boys' Club is for boys in the fourth through eighth grades. They meet every-other Wednesday for games, sports, and other special activities. Come to Sunday school or contact our church office for more details.

Our youth choir and orchestra often put on a concert in the summer, as well as other special performances throughout the year. Find their next event on the calendar and plan to attend!

Girls' Club is for girls in the fourth through eighth grades. They meet every-other Wednesday for games, sports, crafts, and other special activities. Come to Sunday school or contact our church office for more details.

Kids' Club is for children age five through seventh grade, and they meet whenever there is a youth focus night. See the calendar for specific dates.

We encourage all young musicials to participate in our junior or youth recitals, usually held in the spring and fall. Everyone is welcome to come hear them perform; see the calendar for specific dates.

We have Sunday school classes for all ages, and we meet weekly at 9:30 a.m. to study God's Word together. Come anytime and we will help you find the right class for you. 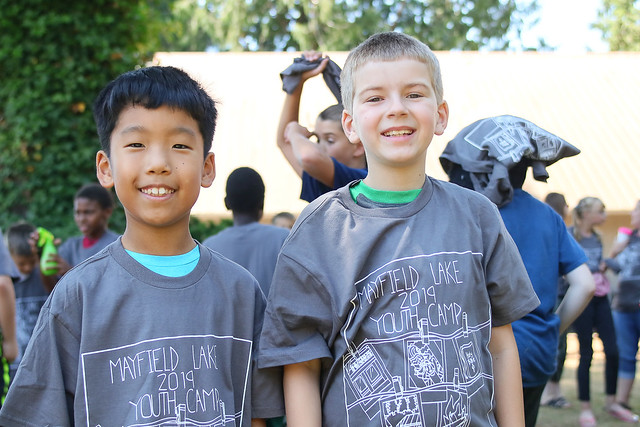 Youth focus sessions are held once a month for high-school ages and up. Dinner is provided and the evening's activities include a group game followed by an interactive study of God's Word.

The first Friday of every month, we turn the meeting over to our young people and they provide the music, testimonies, and bring the message. We usually have one other youth service each month; see the calendar for specific dates.

You are welcome to join us for any of the events on our calendar. We hope to see you soon!

Meet the pastor of our Portland congregation.

Reverend Dave Lambert was born in Vancouver, Washington, in 1968 and grew up attending the Portland Apostolic Faith Church. He was saved by his bedside at the age of fourteen, and the change God made in his life was notable. He testifies, “All the bitterness, the filthy mouth and lying tongue, were cleaned up in a moment of time. I didn’t do that—the Lord did it!”

At age sixteen, Dave and his family moved to the Visalia, California, area and started attending our church in Woodlake. He met his future wife, Rosie, through various church activities in California. She had given her heart to Jesus at age four and had a wonderful testimony of God’s goodness in her life. After dating for nearly eight years, Dave proposed and they were married. In August of 2018 they celebrated twenty-five years of marriage.

Dave and Rosie have two daughters, Diana and Holly. After their second daughter was born, doctors found that Rosie had stage four ovarian cancer. God had His hand in helping the doctors find the cancer and also providing a wonderful surgeon in the Bay area to perform cancer surgery, and today she is well. Additionally, the baby was born with Werdnig Hoffmann Syndrome, an incurable disease that involves spinal muscular atrophy. Doctors said she would probably only live to age two or three, but God healed her and she is now a healthy fourteen year old.

Dave became a minister at the Apostolic Faith Church in Woodlake in 1998, and then became the pastor there in 2015. In 2018 he moved to Portland with his wife, two daughters, and mother-in-law to take on the role of pastor. The Portland congregation is grateful for their willingness to move here and the kindness they have already shown!