June 28 marked one hundred years since the first camp meeting service was held on the 52nd and Duke Street campground. Though camp meeting could not be held this year due to health restrictions, the special occasion was commemorated with a service held in the tabernacle. A limited number were able to attend in person and many more joined through the webcast, collectively thanking God for one hundred years of past camp meeting blessings and more to come as Jesus tarries.

The commemorative service began with a small orchestra playing “Surely the Presence.” Darrel Lee then welcomed the audience and read Psalm 150, which is the same text Florence Crawford read in 1920 at the conclusion of her opening camp meeting sermon. The orchestra then continued with “Come, Thou Almighty King.” The congregation sang “Lead On O King Eternal,” “Revive Us Again,” and “The Way of the Cross Leads Home.”

A trio of Imelda Nedelcu, Diana Lambert, and Michael McCarville sang “Moses, Take Your Shoes Off,” and then Jane Ewers shared memories recorded in her grandmother’s diary about the first camp meeting on the current campground. She read, “The time came when it seemed harder and harder each year to find a suitable place for camp meeting to be held, and also such a task to get a new campground ready in time for camp meeting. In the summer of 1920, the Lord laid it on the heart of our brother Bill Paulson to buy the Woodstock grounds. We were all so happy over this. We fenced the grounds the first year, and I believe it was on Decoration Day [Memorial Day] that the saints gathered together to plant roses around the fence and on the grounds. Sister Crawford had told them that they could each bring a rose bush and plant it, and we were a happy crowd with our rose bushes. God certainly has blessed us on this campground and it has been such a help to not have to hunt for a new place each year.” The diary recorded that the following year, the tabernacle was built on the property, and a few years after that a children’s tabernacle was added. Sister Jane commented that improvements have continued right along up to the present day, and each year the facilities seem better than before.

Sister Jane also read an excerpt from the fall of 1918, when the Spanish Flu epidemic swept through the United States. The diary stated that many of the saints became sick and the mission had to close for a period due to civic restrictions, but “the Lord was surely with us, and very few died.” How encouraging to realize that the God who helped the saints of 1920 is the same One who guides us today!

On a more personal note, Sister Jane related that she was born twenty-five years after the campground was purchased, and today she is deeply grateful that her grandparents and parents remained faithful to God and raised her in the Gospel too. As a child, she prayed in the children’s tabernacle and was saved, and the Lord has kept her since then. She said she is thankful her spiritual heritage has extended to her children and grandchildren, some of whom were in the meeting with her.

Continuing the service, brothers Reggie and Randy Macomber sang “In the Presence of Jehovah” and then Dave Lambert read 1 Samuel 7:2-10, which tells of a time when the prophet Samuel urged the Children of Israel to turn from their sin and seek God to deliver them from the Philistines. Before the sermon, Imelda Nedelcu sang “My Redeemer Lives.”

For the morning message, Brother Darrel began by reading 1 Samuel 7:11-12, where verse 12 says, “Then Samuel took a stone, and set it between Mizpeh and Shen, and called the name of it Ebenezer, saying, Hitherto hath the Lord helped us.” Brother Darrel pointed out that Mizpeh was a place where the Israelites were twice defeated in battle, with thousands slain by the Philistines. Two decades later, the Philistines were threatening to attack again, and Samuel instructed the Israelites to turn from their sin and serve God. When they did that, God miraculously gave them the victory, and Samuel set up a stone between Mizpeh and Shen to memorialize the event. Some might have thought it a bad idea to set up a memorial stone at the site where thousands had been slain years before, but to Samuel saw it as a reminder of what God had brought them through, saying, “Hitherto hath the Lord helped us.”

Brother Darrel commented that some may see the year 2020 as a year of defeats. However, spiritual victories only come when there is a spiritual need. One does not memorialize the moment of desperate need, but the moment when victory emerges! Brother Darrel reminded the congregation that looking back over the last one hundred years, one can note the Roaring 20s, the Great Depression of the 30s, World War II in the 40s, the Korean War of the 50s, and Vietnam in the 60s—times of upheaval and crisis in every decade—but also times of revival and individuals being saved all along the way. Faithful saints of past generations could look back at the challenges and say, “God helped us,” and those who remain faithful today will be able to look back at 2020 and say, “That was the year the Lord helped us.” The service ended with Randy Macomber singing “I Present You to Jesus” before a closing prayer. 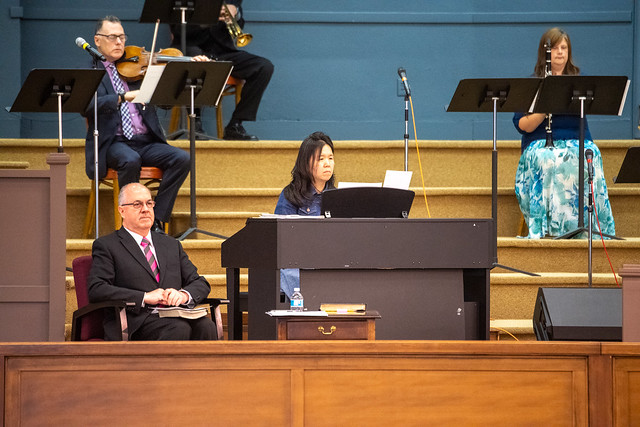