On December 15, the Beginner Department opened the Sunday morning service with their Christmas program, once again bringing smiles to every face in the congregation. Dressed in lovely Christmas attire, they filled three risers at the center of the sanctuary, many of them greeting friends and family members with a tiny wave as they entered the room.

The title of their program was “Glory Story,” and it began with a recitation by Charlie Ivany: “Long ago on the very first Christmas, the nighttime sky was full of angels. They had a wonderful story to tell. It was the glory story!” The Beginner choir then sang “Angels, Angels, Have You Any News?” Charity Hinkle told the next part of the story: “When the shepherds on the hillside heard the exciting news, they went quickly to Bethlehem,” and the choir followed with “Shepherds on the Hillside Heard the Glory Story.” Next, Daisy Andersen said, “In a stable in Bethlehem, God’s Son had been born. His name was Jesus,” and then the choir sang “Glorious Is Thy Name, Oh Lord.” The audience was invited to sing along for the next song, “Away in a Manger.”

The heart of the program’s message came in the following songs. First, Elouise Tonning asked the question, “What was the glory story the angels sang and the shepherds heard?” The answer was given in the choir song, “Glory, Glory, Glory, Jesus Is the Story.” Then Serena Asaya announced, “Among the stars that shone that night was a new star, a bright and shining star,” and Audrey Witham proclaimed, “Wise Men in the East saw the new star, and knew that a very special new King had been born.” The next song was “Glory, Glory, What a Story,” followed by the penetrating song, “Glory, Glory, Glory, Do You Have a Story?”

The final recitation was given by young Lindia Barre, and although it was unintelligible, it was perhaps the cutest line of the whole play! The program closed with a simplified (but no less grand) version of Handel's “Hallelujah Chorus” and then a big “Merry Christmas!” from the whole department. They certainly made everyone’s Christmas a little merrier with their performance! 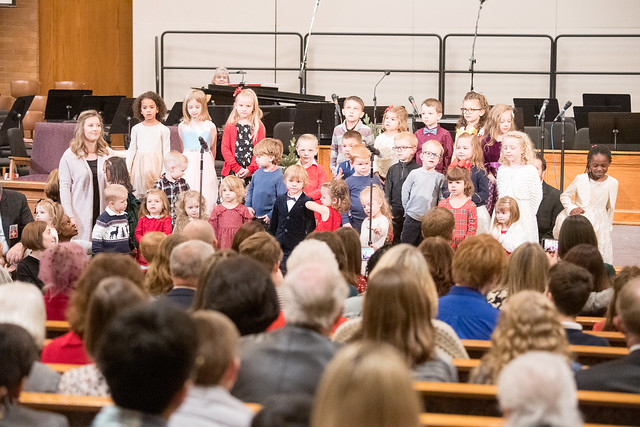