Christmas on the Campground

Christmas on the Campground is a delight every year, yet somehow each year seems even better than the last. From the moment guests stepped onto the campground they were greeted with cheerful music and thousands of dazzling lights illuminating the front lawn. Two notable additions this year were the giant decorated trees near the west chapel. One of them is over fifty-five feet tall, with lights strung all the way up to the top! The smaller tree was equally stunning, as it was covered with thousands of piercing blue bulbs. They set a beautiful backdrop for the nativity scene, and along with the rest of the displays, they were a pleasure for visitors as well as anyone who happened to drive by.

Those who wanted to see even more visual splendors could go on the train ride. Giant carolers, snowmen, winter animals, and strings of lights lined the entire train route, and even the train itself was a treat—the cars were freshly painted and the whistle and smoke stack really worked! A new loading and unloading system made it possible for more people to get through with less time waiting in line, which was also deeply appreciated.

A favorite feature of Christmas on the Campground is Curly the Camel, and once again he brought smiles to many faces throughout each night. He might be the perfect camel for this job, because he seems to perk up whenever he sees a camera! A few yards away from Curly was a petting zoo with ducklings, bunnies, goats, a pig, two alpacas, and more. Children and adults alike enjoyed holding the cuddly bunnies and ducklings, and petting or simply admiring the others.

After a good dose of hand sanitizer, guests could take a moment to warm up with hot cocoa and cookies in the fellowship lodge. The sugar cookies this year were equally as big as they were delicious—a perfect cookie combination! Live music and charming decorations made the lodge a great stop where hundreds could stop for a few minutes to visit while enjoying their treats.

The highlight of the entire event is always the Nativity Pageant, where the Sunday school students and staff rehearse the story of how Jesus was born, and the gift of salvation that He provided. The play is performed on a 100-foot platform in the tabernacle, and hundreds attended the three showings each night. The story begins by relating how the angel appeared to both Mary and Joseph, letting them know that Mary’s baby would be the Son of God. It also relates various perspectives that existed in Judea at that time—the Jewish people who were longing for freedom from Roman oppression, the scribes and priests who were anticipating the promised Messiah, King Herod who feared a threat to his power, the Wise Men who recognized the heavenly signs of the Messiah’s arrival, and the shepherds who were the first to be told of the Savior’s birth. At the conclusion, a narrator explained that Jesus was never meant to be a political ruler, but to rule and reign in the hearts of His people. Before the finale song, the narrator also led a prayer that modeled how to ask Jesus to be the Lord of our lives. Truly, this is the meaning of Christmas!

In total, around eight thousand people came to Christmas on the Campground this year, and what a blessing it was to be able to share the joy of Christmas with our neighbors in such a fun way. We pray that every person who came will remember this event as being inspired by God’s love—His love that caused Him to send Jesus to be the Savior of the world, and His love that still reigns in our hearts today. 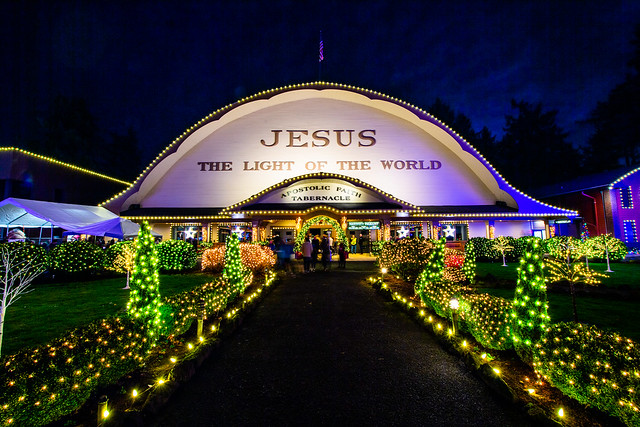