Monday, July 1, was a beautiful evening for a Midsummer Concert. The program included sacred and classical music presented by the orchestra and choirs and directed by Gary Riler, along with various soloists and ensembles. Several pieces were reminiscent of former Director of Music Don Wolfe, who recently passed on to his Heavenly reward. The concert program told of his inspiring life of dedication to the Gospel, and noted that the evening would feature a reunion choir of individuals who had been directed by Brother Don in their youth, as well as a male quartet singing two songs which were arranged by him.

The first song of the evening was “March Militaire” by the orchestra, which also played “Morning Mood” and “In the Hall of the Mountain King” from “Peer Gynt Suite No. 1.” These were familiar melodies and a treat to hear live and in their totality. The Canaan Bound Quartet harmonized beautifully in “I’ll Be Ready to Go with Him” and “Jesus, My Wonderful Lord,” and the Young People’s Reunion Choir sang “Go Out with Joy” and “Witness,” two upbeat songs that inspire hope and a desire to live faithfully. Later that choir was joined by the combined choir and the accompaniment orchestra for a unique arrangement of “When the Saints Go Marching In.”

Following intermission, five recipients of a youth music scholarship were announced. The five winners are from branch churches across the country, and each met the qualifications of having a testimony of victory and being committed to use their musical talents for the Lord.

The second half of the concert included Shawn Worthington playing “Fanfare” and “Toccata on Hymn to Joy” on the organ, which was impressive both to hear and see! The sanctuary choir sang three lovely songs: “The Last Words of David,” “Cherubim Song,” and “Hallelujah, Amen” from “Judas Maccabaeus.” A string ensemble composed of individuals who have all received the youth music scholarship (some that very night!) played “Prestissimo” from “Sinfonia VI in E Flat,” and the program closed with “Finlandia” by the orchestra and combined choirs. It was a delightful evening of great music! 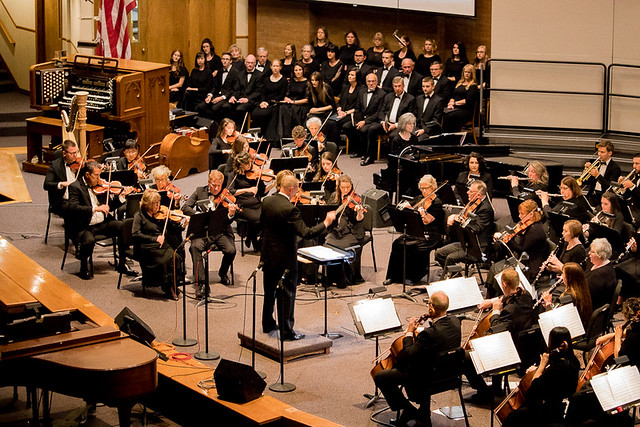