Sing-Along on the Front Lawn

On Saturday, July 13, as Portland Camp Meeting 2019 came to a close, visitors and locals gathered for an outdoor evening of music on the campground. As dusk approached, the front lawn filled with camping chairs and blankets, and later, those chairs and blankets were occupied by families and friends from near and far.

The program included musicians of all ages and from numerous countries spanning the globe. One of the first specials was a group of children from different nations singing “He’s Got the Whole World in His Hands” while holding up the flags of their home countries. Later, the audience was led in singing fun Sunday school songs, bluegrass style music, and several “Hopperized Hymns,” which featured peppy keyboard accompaniment by Steve Hopper of Woodlake, California. Adebanji Alade from London, England, taught the group some very fun UK songs: “I Have a New Life” and “I Am Going Higher.” Another UK music leader, Michael Olowlabi, who is well-known for his bass voice, led the group in “Do Lord” and “Peace Like a River.”

Some of the younger singers included Mattias Tonning singing “Confidence” and Charlet Andersen singing “Multiply” with her grandfather, Dave Andersen, accompanying on guitar. A large group of young ladies later sang “My Feet Are on the Rock,” and a group of Filipinos sang “He Will Carry You” and “Through It All.” Sister Paulette Wyatt of Brooklyn, New York, also blessed everyone with her powerful voice, singing “The Blood Will Never Lose It’s Power.”

With daylight almost totally gone, the evening closed with the final song, “Grace, Grace.” Once again, camp meeting seemed to be ending on a sweet note with the outdoor sing-along. 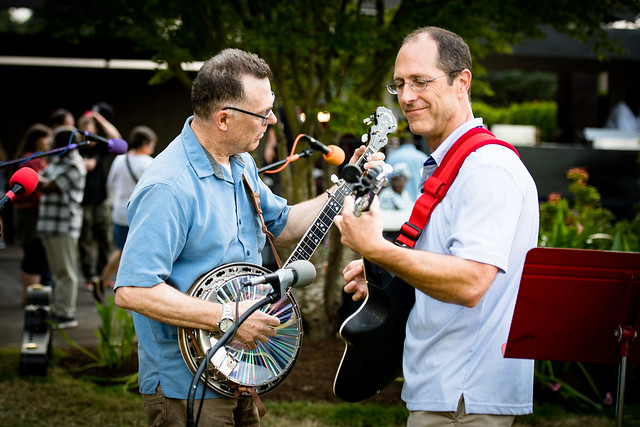