The Sunday evening before Christmas, the sanctuary filled to overflowing for the annual Christmas concert. This year, the combined choir, orchestra, and drama cast presented the musical “God Speaking,” directed by Gary Riler.

The program began with the narrator, Karla Calhoun, talking about the infamous “hustle and bustle” of the Christmas season. She explained that while there are many fun activities happening during the holidays, there can also be a lot of stress and anxiety. The choir sang a medley of Christmas carols, with Peter Moberg as soloist. Then, in a scene of two men at the mall (played by Jeff Yellott and Chris Luka), the audience saw an example of two people who seemed fine on the outside but were struggling with fears on the inside. Brother Chris sang a solo in the song “Speak to Me,” which revealed his deep longing for God in his life.

As the two men at the mall continued talking about their fears for their families and finances, the choir sang “Fear Not.” The song was based on the message of the angel of the Lord to Mary and Joseph. Even though they were in a very troubling situation, they could trust God and rest in His promise. Following this, Diana Lambert sang a solo in the worshipful song “Lion and the Lamb,” praising God because He is truly everything we need.

In the final scene the choir sang “God Speaking,” which talks of the many ways God reaches out to tell people He loves them. The narrator then spoke of things everyone can rest assured of—that Jesus came, lived, died, and rose again, and that He saves, heals, hears prayers, and speaks to hearts. The final piece, “Ring the Bells,” was a celebration of these wonderful promises Jesus fulfilled.

The music of the concert was beautiful, and the message was even better—God loves each one and speaks to hearts still today, bringing lasting peace to troubled hearts. We pray that each one who attended felt the Lord’s love and heard God speaking! 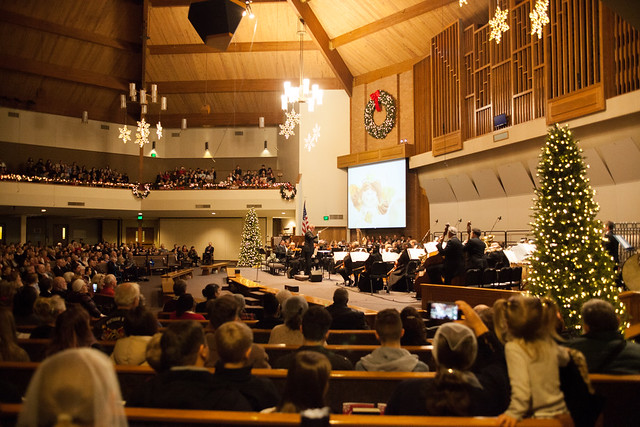