The 2019 Special Meetings in Wharton, New Jersey, were held from August 18-25, with the theme “Back to Bethel” taken from Genesis 13:3. Representatives and visitors came from the District of Colombia, Florida, Massachusetts, New York, Oregon, and Pennsylvania. The first Sunday morning service began with the orchestra playing “Surely the Presence of the Lord Is in This Place,” the choir singing “Come Thou with Us,” and a quartet piece titled “Take Me Back.” Preceding the sermon, Akinola Fawole sang “Back to Bethel.” Ene Ekpin, the pastor of the Philadelphia church, took his text from Genesis 13:1-4. He encouraged all present to diligently seek to return to Bethel—the house of God where there is an altar of prayer—to receive God’s blessing.

In the evening, the orchestra played “A Friend to Jesus” and the choir sang “I Have Pitched My Tent in Beulah Land.” Before the sermon, a mixed quartet sang “Yes, I Know.” Brother Ene preached on God’s love and good thoughts toward mankind. He admonished all to endeavor to forgive and make restitution where necessary to remove hindrances to God’s blessing in their lives.

Monday through Thursday evenings featured Bible teachings by James Timbilla, pastor of the Wharton church. The topics included “How to Become a True Christian,” “The Danger of Apathy,” “What Brings Revival?” and “Back to Bethel.” Before each teaching, selected members of the Wharton congregation shared their salvation stories. The main theme of the messages was to encourage the congregation to search their hearts and fully consecrate their lives in order to be in a place where they can speak to God and also hear from Him.

On Friday evening, Samuel Obatusin from one of the Florida branch churches played a trumpet solo, and the choir sang “Salvation Has Been Brought Down.” Robert Downey, the Director of North America Work, was in attendance and preached on “Memorials,” taking his text from Joshua 4:4-7. He stated that going “back to Bethel” means going back to the place where a spiritual memorial was setup in one’s life. He emphasized that just as God told the Children of Israel to make a memorial so they would not forget the miracles He wrought for them, God wants believers today to remember moments when they had encounters with the Lord. He concluded that looking back encourages and strengthens one’s faith in the Lord. The altar call that followed was well received.

Online prayer meetings were held in the mornings and at noon from Monday through Friday, with prayer for the spiritual success of the meetings and also for specific requests. Another special prayer meeting was organized on Saturday morning from 10:00 to noon.

On Saturday evening there was a revival concert, which was led by the choir director, Daniel Tetteh. Brother Downey gave the opening remarks and the orchestra began by playing “Allelujah from Exultate Jubilate.” Throughout the evening, the program featured sacred music by the combined choir, youth choir, young emerging musicians, and instrumental ensembles. The choir concluded by beautifully singing the famous “Hallelujah Chorus.” The concert was well attended and all were blessed.

On the final Sunday morning service, the service began with the orchestra playing “Beautiful Savior/Fairest Lord Jesus” and the choir immediately followed with “I’m Standing on the Solid Rock” with “The Solid Rock (My Hope Is Built).” Before the Scripture reading, a mixed quartet sang “You Are My All in All” and Tayo Ajayi sang “Come Home Running” as the last special. Josephine McElveen, the East Coast District Superintendent, brought the message. She took her text from Genesis 35:1-5 where God called Jacob to put away all the strange gods in his midst and return to Bethel. She said it was not Jacob’s idea but God’s idea for him to return to Bethel. In the same way, it is the Holy Spirit who is calling people today to return to Bethel. She emphasized the point of everyone searching their hearts and putting away any “strange gods” in their lives in order to worship God with a pure heart.

The revival ended with a fellowship service on Sunday evening. The orchestra played “This Is My Father’s World” and the choir sang “Glorious City of God/We’re Marching to Zion.” Immediately following the choir, Veronica Adewoyin and Samuel Obatusin sang “There’s Just Too Much to Gain to Lose.” Before the testimony time, the choir again sang “Let all the People Praise Him,” and then some from Wharton and visitors told of God’s power to save. Jennifer Ajayi sang “The Altar” as the last special before Brother Downey took his text from Genesis 13:1-4. He told the congregation that just as God called Abram and had a plan for his life, God also has a plan for each person’s life today, and each one can put his or her trust in God when He calls. Brother Downey gave a personal testimony of his call to the ministry and emphasized that submitting to God’s call brings blessings. He stated that every Christian must have a time he or she can look back to and remember God’s faithfulness. Moses had the burning bush experience as his “Bethel,” and all Christians must have their own “Bethel” experiences. He concluded the week of special meetings by saying that going “back to Bethel” should not end with the meetings, but continue in the days ahead. 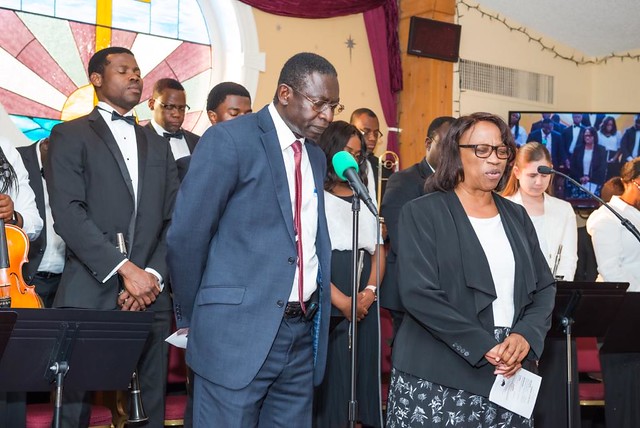