A Great Start to the Eswatini Camp Meeting

The fifth annual Eswatini camp meeting began on Sunday, August 11. John Musgrave, Director of Africa Work, is there representing the Portland headquarters. He arrived a few days in advance, traveling with Newton Jaravani and Kwaziso Bhosha of Zimbabwe, and sent this report.

The Kingdom of Eswatini, or Swaziland as many still call it, is a country of just over one million people. It is mountainous with every type of vegetation from evergreens to palm trees. After arriving on Friday, we traveled to the capital city of Mbabane where we would be staying. On the way, we passed Ezulwini and Emafini, which translate to “Heaven” and “in the clouds.” This seemed appropriate, as the country is very beautiful, and the capital is located at the top of a mountain.

The next morning, we drove back down to Ezulwini, which is a beautiful valley located between two mountain ranges. The king, Mswati III, is building a large hotel complex here with businesses, shopping centers, golf courses, and government offices. These include the U.S. embassy, which is in a nice, new building. We were allowed to visit one of the king’s many properties, and like everything else around, it appeared to be in pristine condition. Among the king’s holdings are sugarcane plantations. When the Swazis gained independence from Britain, the king was given three sugar factories, and this is the country’s main export.

In the afternoon, we had a workers’ meeting that centered on the topic of “Unity.” It took place at the school where the weekly church services are held. Since the school is closed for vacation, some rooms are also being used as guest quarters for camp meeting attendees. In addition to this accommodation, about forty more rooms have been provided by Johnson Mkhonto and his wife at their home, which is referred to as the mission house.

The first day of camp meeting began with Sunday school at 9:00 a.m., and a lesson on “The Golden Rule” taught in both English and Swazi. Two of the classes were held outside, and the weather cooperated by turning from cool and rainy to 83 degrees and sunny.

The morning service was attended by about two hundred, including at least one government official, the Mbabane Regional Administrator, Mrs. Mdluli, who is now planning to attend the South Africa camp meeting. The service began with the children marching in singing, “We are marching forward to Jerusalem.” After that we enjoyed a saxophone solo and then a choir medley of “Crown Him,” “The Love of God,” and “To God be the Glory.” During the announcements, Jameson Ntshalintshali, the Eswatini District Superintendent, read camp meeting greetings from several places, including Portland. Then a quartet sang “I’m a Stranger Here.” The Scripture reading came from Acts 27 and was read by Confidence Nemahungani, the South Africa District Superintendent. Before the message, a brother from Zimbabwe sang “His Eye Is on the Sparrow.” The sermon focused on “A Promise and a Plan,” and then we closed with an altar service.

An afternoon youth service began at 3:00. The youth choir provided a few specials and then we heard three testimonies before Nicolus Moholwa of South Africa, brought the message. He shared the account of Lot escaping the destruction of Sodom and encouraged the young people to use God’s escape plan to leave their sins and not look back.

The evening service included several songs in the Swazi language. The sermon was given by Mashishini Ndlalane of Eswatini, who took his text from Hebrews 3:12. He encouraged everyone to “take heed,” and believe and embrace the promises of God.

All of the services were followed by very good prayer meetings, and this was a great start to the camp meeting.

The Eswatini camp meeting is scheduled to continue through Sunday, August 18. As we pray for the services, we look forward to reports of God’s blessings poured out. 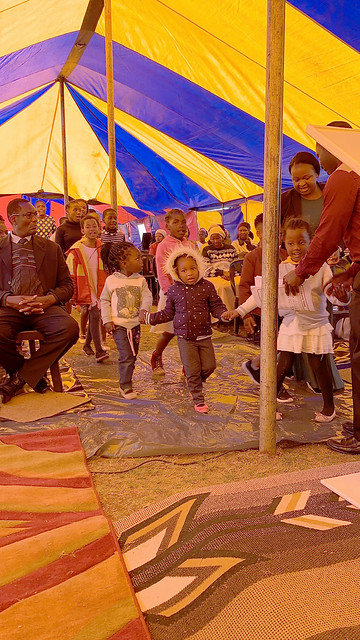