The annual Peru camp meeting held in Cajamarca began on Sunday, July 29, with the theme of “Speak, Lord; For Thy Servant Heareth.” A team attending from the United States includes Sam Ajayi, Director of South America Work, and his wife, Shade; Josephine McElveen, pastor of the Washington D.C. church, and her son, Corey; and Elvido Ortiz, a minister from the Bronx, New York, church. Brother Corey sent this report of the first few days:

The opening day of camp meeting started with a Sunday school lesson on “A Universal Call.” The lesson proved appropriate to the camp meeting. We felt thankful that the Lord’s call is indeed universal, enabling us to gather for fellowship from Chile, Peru, and the United States. We are also thankful that all of the brethren have arrived to camp safely.

In the evening service, Brother Sam welcomed all to the 2018 camp meeting in Cajamarca, Peru. The service included three powerful testimonies from the saints in Cajamarca. One brother shared how the Lord delivered him from alcohol when he was saved. A sister told how God had provided her with a husband after much prayer. Agustin Quiroz, the leader of the work in Peru, thanked the Lord for making him able to attend the camp meeting this year after the health challenges he has had. He thanked the Lord for healing him of cancer two years ago during camp meeting, and continues to look unto the Lord.

Brother Sam gave the opening message from 1 Samuel 3:1-10, which relates to this year´s theme. We were encouraged to be as open to the Word of God during this year´s camp meeting as the child Samuel was to God’s calling.

On Monday night, we were blessed with a night of songs performed by the saints from the various local churches in Cajamarca. The night began with an opening prayer by Eladio Retamal, pastor of our church in Limavida, Chile. The congregation was delighted that this brother and his son were able to attend as representatives of the work in Chile. He also provided a song.

Several selections were spontaneous as the Spirit led some with their families to sing unto the Lord. We were touched by the enthusiasm expressed by those of all ages in their sincere worshiping of the Lord in songs. The grand finale was a group selection of a medley of songs from all of the Peruvians in attendance. The Lord truly blessed, and we are expecting more blessings as the camp meeting progresses.

The camp meeting is scheduled to run through Sunday, August 5. We look forward to more reports as we pray for God’s Spirit to stir hearts and bless in the meetings. 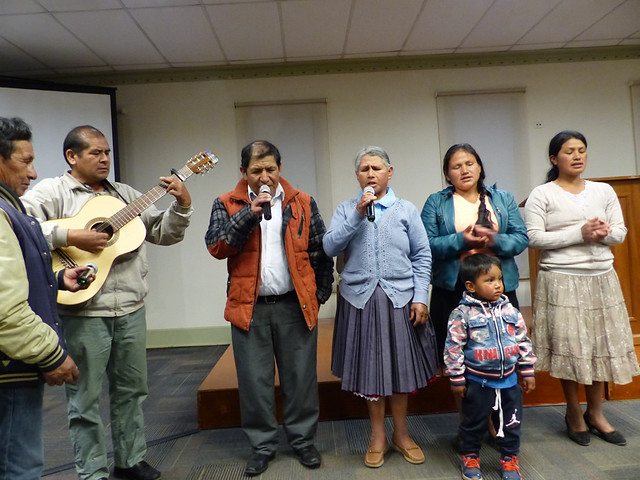