A Report of Praises in Perth

Following the Australia camp meeting in Sydney and a weekend of special meetings in Melbourne, Sam and Shade Ajayi traveled to Perth on the opposite side of the country to visit our group which began there in 2013. Brother Sam sent this report of their time in Perth.

The summer weather is creeping into Western Australia and with it, a swarm of flies which comes in annoying armies. Their presence compels the people to render the unintended “Australian salute”—the constant wave of the hand to fend off the winged foes. But for us and the brethren in Perth, our experience has been the opposite—delightful, praise-inducing, and enjoying three-fold blessings that recently flowed down from the Throne of Grace.

Firstly, a sister and her son had to make an emergency trip to South Africa because a family member was in a dire medical condition. Prayers were made for them and the Lord answered, giving them a safe trip and also helped their family member to come through his surgery.

Secondly, one of the young ladies from the Perth group was missing this weekend because she was one of twenty Australians to win an academic competition. Her dad was very thankful because when they moved from Zimbabwe to Australia just a few years ago, she could hardly speak English. To be the one to represent her state was nothing short of a miracle, which we are all thankful for.

Thirdly, the group has recently emerged victorious from an onslaught of confusion that some had surreptitiously introduced. Stamping out that confusion and giving general support were the main focus of this trip. We thank the Lord for the victory. They expressed their thankfulness that they now have unity and direction. They are now focused on embarking on group evangelism.

On Sunday, which is currently devoted to Sunday school lessons only, the joy and gladness of the brethren is very obvious. Brother Michael Chiutare, the appointed group leader, taught the adult Sunday School on “Guidance.” He brought out the point that God’s guidance may not be as direct as we might think—just as it was with His leading of the Exodus in an indirect route. Brother Michael gave his testimony about how the Lord led him after he had received his Christian experiences, and how his residency in Australia came from the Lord in an indirect and unexpected way. He is thankful for the Lord’s guidance.

The kids’ class was a group of three very engaged and energetic boys, who were taught by Brother Tabani Chipiri. Their lesson about “Alison’s Cry Baby” taught that God doesn’t only answer our prayers with “yes” or “no,” but sometimes with “wait.” At the end of the lesson, they came to share with the adults what they had learned and also recited their memory verse.

After the lessons, an exhortation was given to the group from Psalm 119:59-63. Expanding on the adult Sunday school lesson, we were reminded that no good parent leaves his child without guidance. Our Heavenly Father is second-to-none, and gives us a wealth of guidance. Some of it is general and some is specific in nature. The point was made that guidance is practical, and following it is also a practical matter. Sinners ignore God’s guidance altogether, while some people follow His guidance partially. We should determine to follow God’s guidance wholly.

We ended the meeting with a group prayer, followed by light refreshments and an extended time of fellowship to get to know the brethren better, some of whom we were just meeting for the first time. We are very encouraged that the Lord will firmly establish the group and strengthen His people.

The Ajayis have now concluded their time in Australia and will return to the United States shortly. We are grateful for the good reports that have come back about the work in Australia and pray God will continue to bless His work there. 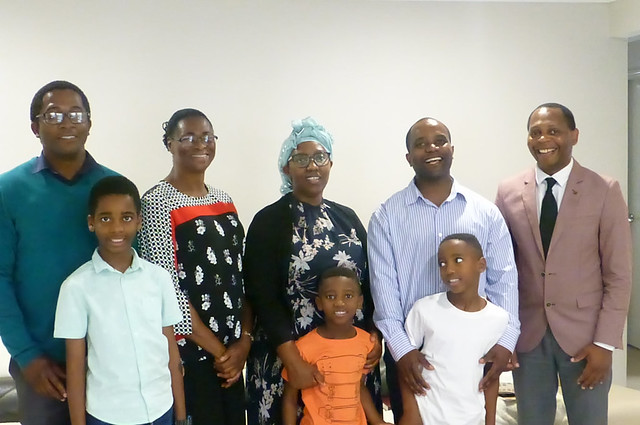