A Special Service in Rauco, Chile

Following the Chile camp meeting in Chimbarongo, Sam Ajayi, director of South America work, and his wife, Shade, led the saints in distributing literature on the streets of Rauco, a town about thirty miles south. Then, on Sunday, February 25, they joined our Rauco congregation for a combined service.

They began with Sunday school taught by Israel Gajardo-Monardes, the Chile District Superintendent. He gave the quarter review on Bible heroes of old, stressing the need to develop faith as they did, and persist in maintaining a relationship with God.

In the morning service, as the congregation was singing “At the Cross,” the Spirit of God moved many to tears. Brother Sam said that in a moment, “each person was drawn to cherish and appreciate the glory which the Author and Finisher of our redemption brought to us through the Cross,” and this led to such a special service.

The message drew from the account in 2 Kings 7 of the famine in Samaria that resulted from the Syrian siege. It was brought out that God sent a dramatic promise of deliverance through His prophet Elisha, but one of the king’s officers doubted God’s ability and perished as a result of his unbelief. The congregation was admonished to have confidence in God when He speaks. The message was followed by a sweet time of prayer and consecration. Then everyone was invited to a sister’s house for dinner.

Brother Sam said it was difficult to part with the Chile saints after a wonderfully blessed camp meeting and then an additional time of fellowship in Rauco, but he and Sister Shade are now on their way to Argentina to visit the saints there. Please continue to pray for the work in South America.

(Mouse over the image below to click through photo album.) 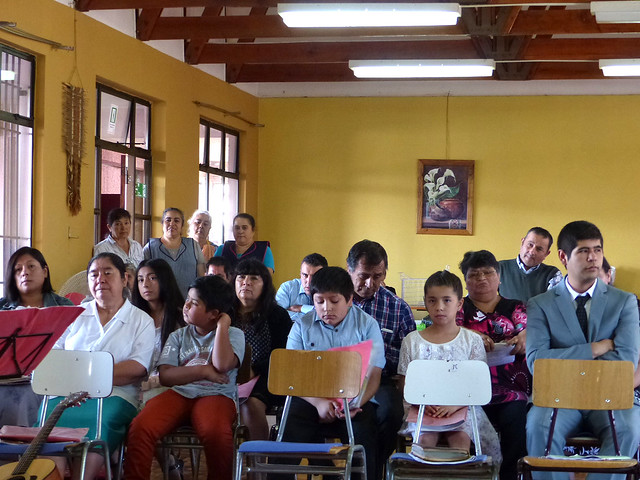