A Sweet Spirit of Fellowship among Romania Saints

John Musgrave, Director of Romania work and his wife, Rodica, along with Harlan and Debbie Lee of Roseburg, Oregon, are in Romania visiting our churches.

They arrived in Arad on Thursday, and that evening attended the service at the Sanpetru-German church where Nico Tudor is the pastor. They noted that since their last visit, the building had been repainted, a new sign installed, and a gravel parking lot placed in front. Brother John said they enjoyed a good service with about fifty in attendance. In his message, he spoke about his recent trip to Africa. He gave the testimony of the Angola leader and encouraged the congregation to use their own testimonies to win souls. Then Brother Harlan preached from Psalm 133 on God’s willingness to “command the blessing.” He also pointed out that this Psalm is exemplified in the fellowship and unity he always feels among the saints in Romania. After prayer there was time to visit, and then our team was invited to John Mic’s house for a traditional Romanian feast.

On Friday evening, the team was in Gotlob where the congregation had recently celebrated their seventeenth anniversary. The young people presented several music specials, singing and playing trumpets, trombones, and stringed instruments. Sister Debbie and Sister Rodica each shared their testimonies, and then Brother Harlan gave a message from Matthew 8:1-13. He brought out that the authority the centurion recognized in Jesus to “speak the word only” is still present today. As an example, he told of a miracle that our team experienced seventeen years earlier in Romania. They were asked to go pray for a very sick baby girl. They anointed and prayed for her, and three days later, when they were in that location for a service, they learned that the Lord had healed her. Today, she is grown and was in the service with her parents. Brother John reported that there was a sweet spirit on the entire service and the congregation enjoyed a good time of prayer at the conclusion. Afterward, the pastor, Benjamin Cret, hosted the team for another wonderful meal with good fellowship.

The first of three ladies’ conferences was held on Saturday morning. The focus verse and theme was Ephesians 6:11, “Put on the whole armour of God, that ye may be able to stand against the wiles of the devil.” About forty attended, and afterward they enjoyed a delicious lunch and had time to visit with each other.

Meanwhile, about twenty-five men gathered at the Zadareni church for a ministers’ meeting. Based on Psalm 11:3, the topic was “Building on the Right Foundation.” The first portion of the meeting centered on the necessity of every individual, church, and organization to follow God’s instruction to be able to stand firmly in the Gospel. The second portion was a review of the three foundational experiences of an individual’s walk: justification by faith, entire sanctification, and the baptism of the Holy Ghost.

On Sunday, the Musgraves and Lees went to Comlosu Mic for the morning worship service. They reported that the pastor, Viorel Farcus, is in the process of remodeling the church, and has completed the interior, doing an outstanding job.

The church was full, and the congregation provided many music specials. After a good service and time of prayer, our team was treated to lunch.

In the afternoon, the team went to Teremia Mica to see a group they have been visiting for over fifteen years. Many were in attendance from the community, and the service was full. It featured rousing music from both children and adults, as well as the testimonies of a married couple from nearby Jimbolia.

Midway through, it was announced that Beni Silea would be joining the ministry. He is the brother of Florin Silea, the pastor, and has been a dedicated worker. He has three sons with his wife, Rebecca, who has been a mainstay of the music program, including forming a youth orchestra. The other ministers gathered around Brother Beni and laid hands on him, praying God would bless his service and family.

The meeting concluded with prayer, and then refreshments were served.

In the evening, our team went to Zadareni where Ted Bora is the pastor. He is also the Western Romania District Superintendent, and travels with our team, doing much of the interpreting. They were joined by many from the Sanpetru-German congregation. Sister Debbie gave her testimony of salvation while Sister Rodica interpreted, and both Brother John and Brother Harlan preached. They said it was a good time of fellowship with a sweet response of prayer afterward.

For dinner, the team was invited to the home of Pamfil and Viorica Fogo. Four years ago, this couple’s twenty-four-year-old son died in a motorcycle accident and Brother John and Brother Harlan attended the funeral. The couple was devastated, but the Lord sustained them, and they have remained steadfast in the work at the Zadareni church. They served a delicious meal of soup, potatoes, pork, chicken, and dessert.

The Musgraves and Lees send greetings from the saints in Romania and ask that we keep this trip in our prayers. 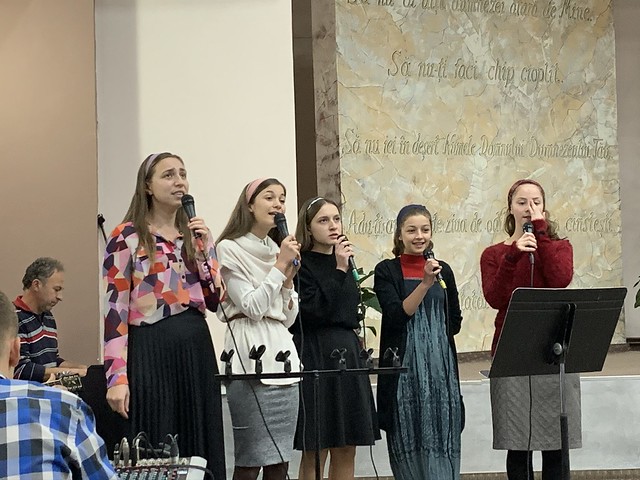