A Wonderful Welcome in Nigeria

John Musgrave, who was recently appointed Director of West and Central Africa (WECA) Work, is in Africa for the first time, visiting our churches in Nigeria and Ghana. He arrived in Lagos on Wednesday, May 30, and was warmly greeted by Bayo Adeniran, the WECA District Superintendent, who escorted him to a reception at the WECA headquarters, located on the campground at Anthony Village.

Brother John said fifteen children from the Apostolic Faith secondary school welcomed him by singing several well-done specials, presenting a beautiful bouquet of flowers, and reciting an official greeting. Afterward, he was introduced to the WECA management team.

The next day, they returned to the campground, and Brother Bayo provided a tour of the headquarters office and some of the other facilities, including the publications building, infrastructure management building, and the tabernacle.

They also met with the WECA management team, made up primarily of volunteers who have retired from professional careers and now devote their time to the work of the Lord. One of these was Aremu Ezekiel, who received salvation at age twenty-two and is now eighty-eight. Years ago, he was Brother Bayo’s District Superintendent. Now he helps to catalogue and record properties for the Infrastructure Department.

There was also an opportunity to meet with leadership from the Lagos and Abuja regions, and to hear reports given by the various leaders. The WECA team has a systematic program of evangelizing, planting, and establishing new locations, which involves dividing the area into regions, then districts, zones, churches, and finally, Sunday school stations and Bible study centers. The activity in each area is supervised and carefully monitored.

On Friday, a visit was made to the headquarters of the Port Harcourt region, the Elioparanwo church, which is pastored by Edet Bassey, the Port Harcourt Regional Overseer. Brother John said he received another warm and very outstanding welcome, and then spent the afternoon meeting with the leadership from the Enugu, Ikot Enwang, and Port Harcourt regions. As the various leaders gave their reports, he was impressed by the wonderful and tremendous work that is being accomplished for the Lord in each area.

In the evening, a revival service was held at the Elioparanwo church. Brother John reported that it was a wonderful service. He said it began with a presentation by the Sunday school children, illustrating a scene from the lives of Moses and Joshua. As the service continued, there were beautiful music specials by the orchestra, choir, and a soloist. In addition, many victorious testimonies gave glory to God. He said there were perhaps one thousand or more in attendance, and every part of the service brought a hearty “Amen!” from the congregation. Toward the close, before the altar call was given, the congregation responded by going to the altars.

On Saturday morning, Brother Edet gave a tour of the Port Harcourt headquarters property, which includes an Apostolic Faith secondary school. There is some construction underway to provide a path connecting the various facilities, and also a foundation is being dug for a children’s hall being built to accommodate the 440 Sunday school students who are currently enrolled.

In the afternoon, two zonal church locations in Port Harcourt were visited. The first was Diobu where Benjamin Amadi is the pastor. Again, they were greeted by smiling children who presented a bouquet of flowers and sang a few welcome songs. Then everyone proceeded into the church for a service. At the close, the congregation responded heartily to the altar call. Brother John noted that our church really stands out here, and the congregation, made up of precious people, is making quite a difference in the community.

The second church visited was in Rumuomasi where Samuel Paul is the pastor. An American flag was waving to one side of the entrance, and the Nigerian flag was on the other. As our team approached, both national anthems were played. Then a quartet followed by a soloist sang before the congregation moved inside for a short service. Brother John said he had a wonderful time of fellowship with the saints at Rumuomasi and throughout his visit to the city of Port Harcourt, where we have about twenty-five zonal churches and nineteen Bible study centers and Sunday school stations.

Sunday was spent at the WECA headquarters church in Lagos. The day began with several hundred workers meeting in the prayer room and then continuing to Sunday school. The general assembly was attended by about three thousand and opened with a children’s program including a skit. In it, a young boy lying on a cot prayed through to salvation while a host of children dressed as angels waited at the other end of the platform to present him with a gold crown and welcome him into the Kingdom of Heaven. Following this, everyone dispersed into numerous classes, including six with translators.

The morning worship service was attended by about four thousand. Brother John said the music provided by the orchestra, choir, a quartet, and a soloist was beautiful, and the congregation responded enthusiastically to the altar call.

A workers’ meeting was held in the afternoon. The structure for the meeting followed an outline created in 2014 in which the young people (ages eleven to thirty-nine) are considered to be the “wheels of the Gospel car,” while the older adults (ages forty to fifty-five) are considered the “engine,” and the senior leadership (those over age fifty-six), the “steering.”

Key members from both the “wheels” and “engine” gave presentations outlining the organizational structure, performance strategies, and activities associated to their respective areas. Then a handful gave testimonies of the great results of these programs.

Brother John said it was clear from the meeting that the workers in Nigeria have hearts and a willingness to advance the Gospel throughout Western and Central Africa. He is scheduled to travel to Ibadan next, remaining in Africa through June 13. 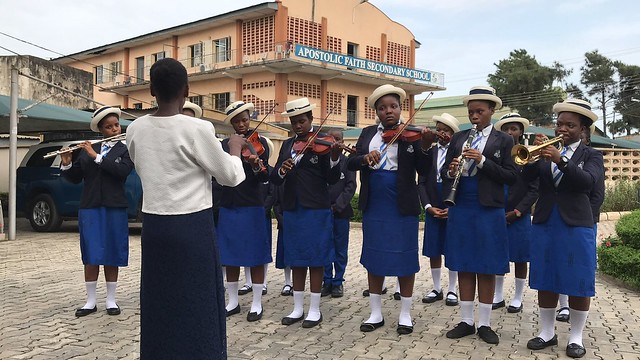