Amazing and Abounding Work in Angola

John Musgrave, Director of Africa Work, and Erik Calhoun, the Portland youth pastor, are in Angola for the annual camp meeting which began on Sunday, August 18. Brother John sent this report of their arrival and the first day of the camp meeting.

After a stopover in Luanda, Brother Erik and I arrived with a Southern Africa delegation in Huambo where our Angola work is headquartered and the campground is located. Angola has a population of thirty million, and Huambo has a metro population of close to 1.9 million.

We were met at the airport by Antonio Castilho, the Angola District Superintendent, and several of the provincial leaders. Then as we exited the building, we were further greeted by the saints. Adults and children alike were lined up singing welcome songs in Portuguese, their national language. In a welcome ceremony, some of the younger Sunday school students presented us with scarves decorated with our logo and “Welcome to the Angola 2019 Camp Meeting.”

We checked in at the hotel and then went to the campground where another welcome awaited us. The saints were lined up on either side of the main road, waving and singing. Inside the campground, scores of small tents had already been pitched by camp meeting attendees. There was also a dorm building to accommodate guests.

We were ushered into the main church for a short welcome service with about five hundred in attendance. Then we received a tour of the building, which included a prayer room, pastor’s office, administrative office, and restrooms.

We also toured the campground, which includes kitchens, classrooms used for Sunday school, restrooms, and a tabernacle, as we would call it. This is a rectangular structure that is not fully enclosed. The main area is spanned by trusses that rest on beams and support the roof, and a half-wall runs the perimeter. We were told it seats about three thousand while already four or five thousand had arrived on the grounds. In addition, another two thousand are waiting for our visit at their location before they join the camp meeting in progress.

Following the tour, we gathered back at the church for a Sunday school seminar and a workers’ meeting. Both were attended by about eight hundred and were translated into Portuguese and Mbundu, which is expected for all of the services.

During the seminar, Tawona Rusere, the Sunday school superintendent for Southern Africa, did an excellent job of presenting the Primary Pals, Answer, and Search curriculum, and showing how they could be used. This was in preparation for Sunday, when the Angola churches would begin using these materials for the first time.

The topic of the workers’ meeting was “Unity,” and there was an enthusiastic response from the workers. The meeting was also an opportunity to express appreciation to Brother Antonio for his leadership and the tremendous work that has been accomplished in Angola.

The first day of the camp meeting began with a Sunday school general assembly in the tabernacle. Then everyone was disbursed to classes. The adults and seniors remained in the tabernacle, the young people went to the main church, completely filling it, and the children went to a nearby church that is currently under construction.

We visited the classes, and as we approached the location of the children’s classes, we saw that they were lined up on either side of the street, singing and welcoming us. Several more were gathered in the courtyard outside the church building. We entered with them and had an opportunity to thank them and their leaders for their gracious and kind welcome.

As the classes commenced, we took a tour of the area and learned that this location is where Brother Antonio began the Apostolic Faith work in Angola after being converted in 1990. We were shown the remains of what had been the original church, offices, and hiding areas used when the work was in its infancy. This was during the country’s civil war, which took place from 1975-2002, and the church was used as a shelter from bombings by refugees. Since then, the original congregation, which numbered about three hundred, has grown to over 330 locations with perhaps 100,000 attending. It is truly amazing what the Lord has accomplished here.

We returned to the campground in time for the morning worship service and there was standing room only available in the tabernacle. The orchestra and choir gave inspiring specials. The singers harmonize beautifully. Brother Antonio officially welcomed all of the visiting church leaders one by one. He had much enthusiasm, and the response of the congregation rose to meet it. Several greetings were read, ending with the one sent from the Portland headquarters. The people gave a hearty “Amen” to each sentence as it was read in Portuguese.

After the announcements an ordination service was held for three board members and five provincial overseers. Comments were given on the Biblical model for ordination, and then the district superintendents gathered around and prayed over each candidate in turn.

The service resumed with a special followed by a Scripture reading from Luke 14:15-24. Another special preceded the message, which was taken from Revelation 22:17. In keeping with the camp theme of “The End Times and Rapture,” it focused on the invitation that is extended to all. During the altar service that followed, nearly one hundred were anointed and prayed for.

The Sunday afternoon youth service featured testimonies from four young men who are now living in Namibia. Brother Erik brought the message using John 2:8-11 and the first four chapters of John’s Gospel. He emphasized that salvation is the greatest miracle of all.

The Sunday evening service began with a trumpet solo. The choir then sang “In Christ I Stand” and “My Wonderful Lord.” Brother Erik led the congregational singing. Among those who testified were three attending from Cuando Cubango, Cunene, and Lubango, Angola. The evening message was taken from Romans 8:28-31 and focused on how much God wants us to be saved.

Every service ended with a rush to the altar area, which does not begin to accommodate the numbers. This leaves many to pray where they are seated, and they do pray.

The Angola camp meeting continues through Sunday, August 25. Our team hopes to visit a few branch churches before returning home at the end of this week.

(Click below to watch a video of camp meeting highlights.) 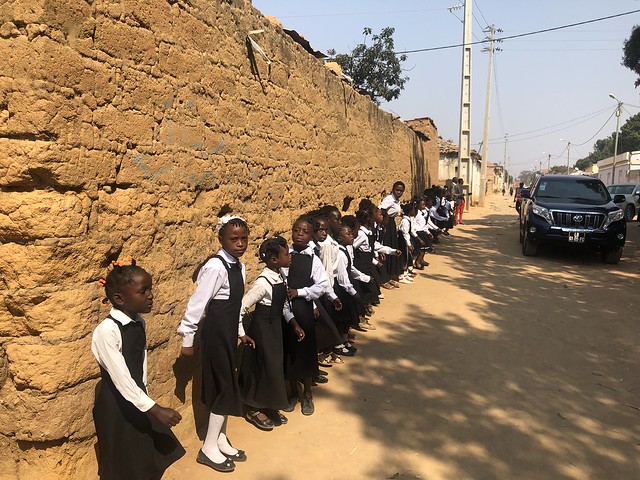