Bill and Lori McKibben, and Mark and Sylvia Staller, completed their last few days in the Philippines with visits to six more branch churches.

On Monday, January 6, they had breakfast at the Calaocan church, which is led by Joel Salazar, the worker in charge. This was our first branch church established in the Philippines, and the building bears the curved roof influence of the tabernacle in Portland. The trip continued to Kaliwanigan, where the church is situated in the middle of open farmland. Though a weekday, the saints came out to greet the visitors, and offered a light snack.

The group then went to the Tabulac church, pastored by Emelita Torres. Many had gathered to greet them and share lunch as well as a tour. This is the second building for this congregation and was completed just a few years ago. It includes Sunday school rooms, a kitchen, and pastoral living quarters. The saints were excited to show the new tile that is soon to be installed in the upstairs rooms.

The final visit for the day was to our church in Maragol, pastored by Lamberto Dollente who is also the newest Philippines board member. Again, many had gathered for fellowship, and also gave a tour, pointing out the various improvements made in recent years. The visit to each location concluded with prayer for the congregation as well as the continued spread of the Gospel in that community.

On Tuesday, the team visited two locations. First, they had breakfast with a group that meets in Cabanatuan City and is led by Juanita Brigole, the worker in charge. It was in this city that the Apostolic Faith work in the Philippines began, and now after many trials and setbacks we again have a congregation here. The saints have purchased a nearby lot and are hopeful of building a church in the next few years. The second visit was to our church in San Fernando, pastored by Imelda Sirot. On an earlier trip Brother Bill was part of a service held under a mango tree, and this was his first time to see the completed building at this site.

Wednesday evening, Brother Mark led a Bible study at the Bagong Sikat headquarters church. Taking his initial text from Joshua 1:8, and using an additional verse from each book of the Pentateuch, he spoke about meditating on God’s Word. The meeting was followed by tearful goodbyes as this was the final service of the Philippines portion of the trip.

After leaving the Philippines, the McKibbens returned home while the Stallers traveled to South Korea to participate in a week of youth meetings at the headquarters church in Seoul. This was the Stallers’ first time in South Korea, and they were warmly welcomed at the airport by Kim Jeong Min, the District Superintendent, and his wife Lee Jin Young. Later in the day they were welcomed again by many saints who had gathered at the Seoul church for the occasion.

During the week, Brother Mark preached a series of doctrinal sermons on the topics of salvation, entire sanctification, the baptism of the Holy Spirit, and the victorious abundant life. The young people were thrilled to hear the same doctrines being taught as those brought to South Korea over fifty years before by missionaries Harold and Sally Barrett. Good altar services followed each of the meetings with several claiming salvation and deeper experiences.

The Stallers return home today. Please continue to pray for the saints in East Asia as they continue to spread and live the Latter Rain Gospel. 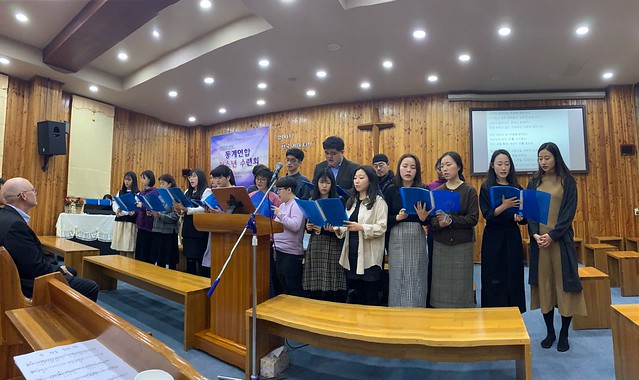