The Australia camp meeting, which is held annually in Sydney, began on Sunday, September 29, with much excitement and an expectation that the Lord would bless. Sam Ajayi, the Director of Australia Work, and his wife, Shade, were there representing the Portland headquarters church, and they sent this report of the week’s meetings and activities.

The camp meeting began with Sunday school for every age group: children, intermediate, and adults. It was a good time of learning, discussion, and fellowship. In addition to the Sydney congregation, we were joined by brethren from Melbourne, Australia, Canada, and even Bangladesh.

The morning service opened with rousing music from the choir and orchestra. The message was taken from Revelation 21, in which the amazing beauty of the New Jerusalem is vividly presented. We were told that camp meeting is a time to prepare our hearts, not only to live faithfully in this life, but also to live in the New Jerusalem where no sin or unclean thing will be allowed to enter. The meeting concluded with a fervent prayer time, and afterward we enjoyed a barbeque get-together, which has become a camp meeting tradition.

In the evening, the sermon was taken from 2 Kings 13. We were encouraged to take advantage of our time at the camp meeting, and seek the Lord fully.

Monday evening was devoted to a review of last year’s camp meeting activities, and a good time of fellowship followed.

Bible teachings were given on Tuesday through Friday mornings, and many reflected the camp theme of “God’s Fortification.” On Tuesday, we heard about “God’s Fortification through His Word." We were told that in Biblical times, God’s Word came to men in different forms. Taking examples from the lives of Adam, Abraham, Enoch, Joshua, and others, the teaching examined how God saved, directed, and blessed His people. In Wednesday’s teaching, Proverbs 4:5-13 was used to show how it is of utmost importance for us to love and follow the Word of God. If we will do this, we cannot fail.

The evening services were varied. On Tuesday, we held an evangelistic service. Frank Igweonu, the group leader in Melbourne, preached from Hebrews 2, admonishing us to pay particular attention to heeding the Word of God.

On Wednesday evening, the choir and orchestra presented the annual concert, and gave amazing performances. Among the numbers presented were “We’re Matching to Zion,” “When God Dips His Love in My Heart,” “It’s Shouting Time in Heaven,” and “I’m Feeling Fine.” There was also a very delightful “Joy in My Heart” played with action. To conclude, the combined choir and orchestra provided a beautiful performance of “John Saw,” with Sister Foluke as soloist. Indeed, it was a blessed night.

A children’s church meeting was held on Thursday, and we were delighted to see how the children are progressing in their music. On Friday, the young people conducted a youth service, and it was refreshing to see them developing spiritually and wanting to live for the Lord.

Many blessings were experienced during the weekday services, including the salvation of one, and we heard many inspiring testimonies. One sister testified to the power of the Lord to save and to keep. She said that her father was openly against the Apostolic Faith Church, and after she was saved, did many things to keep her from attending. Then the Lord miraculously intervened and saved her father. Before he passed away, he went around making restitution to the people he had been combative with.

Another sister who had just moved from Zimbabwe to Australia thanked the Lord for saving her soul, and for keeping her through college and setting her on the path of holiness. She told how she had been worried about coming to Australia because her desire was to fellowship with people who truly worship the Lord. She was so thankful to find such a people in the Apostolic Faith, and said they have showered her with love.

On Saturday, we observed the ordinances of the Lord’s Supper and Foot Washing. Ernest Akerejola, the Sydney pastor, gave the message on the Lord’s Supper and Brother Frank gave the message on Foot Washing. It was a somber time as we reflected on the immense sacrifice the Lord made for us. However, we rejoiced in the privilege of observing the things the Lord has commanded us to.

For the final day of camp meeting, everyone came expecting a parting gift of blessings from the Lord, and He did not disappoint. Following Sunday school, the choir and orchestra began the service with a stirring prelude which included “Walk about Zion,” “Looking for a City,” and “I can Almost Hear.” Then, before the message, the choir sang “He Will Carry You.”

The message was taken from 1 Samuel 10:1-7 and brought out how God transformed Saul’s life, so that he was “turned into another man” (verse 6), and set him apart for blessing. We were reminded that God has blessed us during this camp meeting, and we should strive to continue with Him until we meet in the New Jerusalem. Following the service, one of the young people prayed through to salvation, and what a time of rejoicing we had! It was a great way to end the camp meeting.

At the close of the services, Brother Sam announced the dates for next year’s meetings should the Lord tarry. The Sydney camp meeting is set for September 27 to October 4, and a Melbourne weekend of revival is set for October 9 to 11.

The Ajayis are now in Melbourne anticipating this year’s weekend of revival services, which are scheduled to begin this Friday, October 1. We are thankful for the blessings gained in Sydney this past week, and pray the Lord will equally bless in Melbourne. 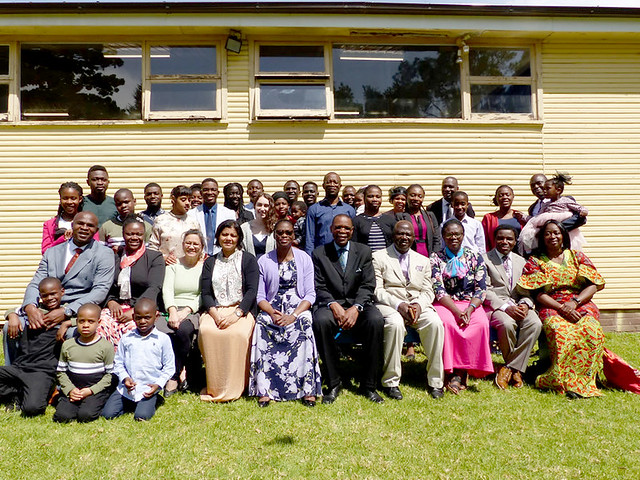