I arrived in the Republic of Benin on Monday, and that evening went to the headquarters church on Jericho Road in Cotonou for a service. I was greeted at the entrance by several of the saints, including two children who presented flowers. Inside, about two thousand were in attendance, filling the main floor and balcony.

The service began with a children’s program, which included spirited recitations, songs, and skits. One skit portrayed a group of young people being invited to church and eagerly responding. A music prelude followed with the choir singing “Marvelous Grace” in English and two songs in native tongues, including “Do Ho” or “Speak” in the Fon language. The brass also played a selection, featuring an impressive French horn solo throughout.

The service was conducted in three different languages with one man doing the interpreting. This included the sermon, which was given in English and then translated into French and a native language. At the conclusion, there was a good time of prayer around the altars.

Later, I had the opportunity to take a tour of the Cotonou church building. It currently has three floors, but a fourth is under construction. The main sanctuary is on the first floor, and a U-shaped balcony makes up the second. The third floor is used as a general assembly area for Sunday school and also has several classrooms and a prayer room. The top floor is being constructed to eventually house the French translation work for our Western and Central Africa (WECA) churches. It includes offices for translating, publishing, printing, and distributing literature, as well as restrooms, a lunchroom, and a studio for broadcasting French services worldwide.

On Tuesday, a three-part presentation was given on the progress of the French translation work. Thirty were in attendance, including a team from WECA and the Benin regional directors and board members. The first part of the presentation gave an overview of responsibilities and methods for assessing the need for French literature and then producing and distributing it to ten different countries. One useful tool has been to make all French material available in pdf format, so it can be printed locally worldwide. The second part of the presentation was given by a representative of the Benin headquarters church, which is French speaking and is directly under WECA in oversight of the French translation work. One current goal is to host a French website for live webcasts of the Benin church services. The final portion of the presentation focused on the Republic of Benin work, revealing that we have sixty-three churches and thirteen thousand members in this country.

On Wednesday, the WECA delegation and I visited our Owode church in Benin for a morning service. As we approached the building, the walkway was lined with children in sky-blue and black uniforms singing, “We welcome you in the Name of Jesus.” Inside, they sang several more songs and performed a skit depicting a mother bringing her child to church. The child prayed, received salvation, and the skit ended with everyone rejoicing.

The service was attended by about three hundred, and was highlighted by special music, including a violin solo. The pastor, Eric Dacro, gave a brief history of the work at this location saying it began in February 1997 with a small group of worshipers meeting in a home. The home was eventually purchased, and ten years later, the foundation of the tabernacle was laid. The service closed with a time of prayer, and then we received a tour of the building. As we were leaving, the children gathered outside once again and sang a goodbye song.

In the afternoon, we went to the Porto Novo (PK14) church on the Benin campground where the annual camp meeting is held. Last year it hosted 5,500. Like the other services, this one began with a children’s program. However, this time the children were led in songs by a very young conductor who was especially dynamic! He captured everyone’s attention.

The service featured wonderful music throughout including several choir numbers in French such as “Place en Dieu ta Confiance” or “Put Your Trust in God” and “Vas Raconteur l’Histoire,” which means “Go Tell the Story.” It closed with a time of prayer around the altars.

I arrived in Ghana this morning, and will spend a few days here. 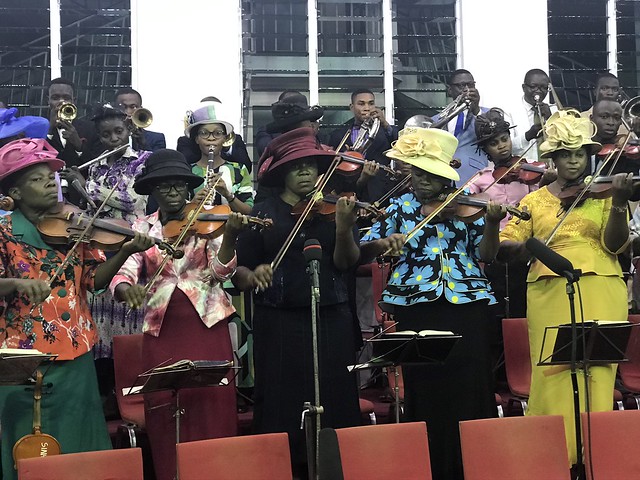