Our team in Cajamarca (Sam and Shade Ajayi, Catey Hinkle, and Sarah Walden) enjoyed the remaining services of the Peru camp meeting, which concluded on Sunday, August 4. They sent this report, written by Sister Sarah, telling how the Lord blessed.

The Peru camp meeting has been a blessing through and through! We have enjoyed fellowship with the saints of God, learning from God’s Word, singing praises together, and most importantly, bringing our prayers to the Lord. Each weekday morning, we gathered together for prayer meetings. Prayer requests were made for many things including for healing, the salvation of loved ones, family situations, and more. We had plenty to spend time in prayer over!

At Tuesday evening’s church service, Augustin Quiroz, the Peru District Superintendent, started us off in prayer, after which Sister Cecibel of Cajamarca led the congregation in some very heartfelt singing! Before the testimony portion of the service, Brother Sam spoke about why it is important to testify about what the Lord has done for us, and how to do so in a way that gives glory to God. Then Sister Shade shared her testimony about how she came to God and was saved, though she was from a Muslim family. We also heard a testimony from a brother in Peru about how God had greatly protected him in the midst of a car accident. Our message for the evening was given by Eladio Retamal-Vasquez, pastor of our church in Limavida, Chile. He taught on the question, “What is salvation?” Taking his text from many parts of the Bible, including Romans 3:23, Isaiah 1:18, and John 3:16, he carefully explained that there is no other way to eternal life but through Jesus, and the one who believes in Him is not condemned.

On Wednesday evening, we heard several inspiring testimonies. Sister Felista from Combayo, Peru, told how God delivered her from a terrible illness that at times caused her to fall to the ground in intense pain. She said the illness made her life difficult and lonely, because it affected her several times a day. She was invited to our church, but when she arrived, would not step inside. Finally, after the pastor called to her three times, she entered, and as she did, the Lord instantly and completely healed her. Then she prayed, and God saved her as well!

A brother from San Luis, Peru, also testified, sharing how God healed his body when he was still a sinner. Then his wife became ill and prayed through to salvation. He followed her example and prayed, and God saved him also. Before the message, the people of the Cajamarca church sang a beautiful song. Then Brother Sam spoke on sanctification, referencing Hebrews 12:14. He brought out that God is holy and wants us to be holy like Him. He said the center of the Christian life is holiness. This is obtained by receiving sanctification—a definite experience from God that follows salvation. It is maintained as we continue to live a holy life, which sanctification affords. The meeting was followed by a very Spirit-filled prayer service.

At Thursday evening’s service, Brother Sam utilized a “question and answer” format of discussion with the congregation to review what we had learned from the teachings held during the week. He also spoke about the Apostolic Faith Sunday school curriculum, explaining how it is used in our churches and the immense benefits we can derive from it. Then he preached a message based on Psalm 19:7-11. We were reminded that when we are saved, we don’t see the Word of God as a set of rules. Instead, His laws “are sweeter than honey” to us. When we are holy, the Word of God becomes a delight to us and we strive to bring our lives into oneness with every part of it. The Word of God helps us to understand God’s will for our lives. We need to “taste and see that the Lord is good” so that we can follow and do His will.

Friday evening’s church service began with prayer requests and prayer. This was followed by a time of fellowship among the saints as we enjoyed eating cookies and greeting one another. The message that followed came from 1 Timothy 6:11-12 and focused on the topic of being a child of God and following Jesus by our pattern of life. We were told that when God changes us on the inside, He also changes us on the outside. We want to show that we are children of God through actions and appearance. In closing, we were admonished to follow close behind the footsteps of Jesus where we would be safe with Him ahead to protect us.

On Saturday, a group that included about fifteen Peruvians and five visitors from the United States and Chile met in the morning and boarded a small bus in order to visit two of our churches in the mountains outside the city of Cajamarca. Due to a construction project on the main road, we travelled on bumpy and winding roads for nearly four hours before arriving at our church in the village of San Luis. The church is under construction, and the pastor, Severino Coronado-Marcelo, showed us the progress that has been made since the last camp meeting. The church has two stories, with a sanctuary on the first floor and space on the second floor for ten guest rooms. There has also been progress on a dining hall, kitchen, and restrooms. Situated on a beautiful plot of land high up in the Andes Mountains, with stunning views in every direction, there is no doubt that this would be a wonderful place for a church retreat!

After looking around the property for a bit, the visitors and the San Luis church members all gathered in the sanctuary. Brother Eladio led in a prayer for God to bring the church project to completion before the next camp meeting and use all the facilities for His glory. Following this, everyone enjoyed a delicious traditional Peruvian meal provided by the San Luis congregation. The meal included potatoes, rice, fried chicken, and “choclo,” a local variety of corn.

The next stop on our day-trip was to the village of Bella Vista, which is outside the town of Combayo. Getting to the church involved hiking up a hill for about ten minutes, which is not so easy considering the 11,000-foot altitude! But, we all made it. The Bella Vista church has guest quarters on the second story and is blessed with a gorgeous view of the countryside. The pastor, Rogelio Nontol-Ramos, thanked everyone for coming and shared that during the past year, the church was able to replace their wooden benches with chairs, lay carpet on the cement floor, and purchase a new sound system. For those of us who had been there in past years, the improvements were noticeable and the church was truly beautiful. Brother Sam commented that at his first visit the church had dirt floors, which the Portland headquarters helped to upgrade to concrete. Now through the faithfulness of God and the saints, the improvements will impact everyone who enters. Before we left, two of the Bella Vista saints were anointed and prayed for. Then we took group photos in front of the church and said our goodbyes.

It was a real joy to spend the day with our Peruvian brothers and sisters, and to share in their joy for the work they have accomplished in their church buildings. It was a day we will not forget!

The final day of the camp meeting began with a time of prayer followed by Sunday school. The lesson, which was on “Faith and Prayer” was taught by Brother Roel of the Cajamarca church. He read the text from Matthew 7:7-12 and said that faith and prayer are essential to a Christian’s spiritual life. He pointed out that having faith in God is almost synonymous with obeying God, because the one who truly believes will obey, and the one who obeys is doing so because he believes. Brother Roel shared that sometimes prayers take a long time to be answered, but with faith we can wait and know that God will answer. He also said that we can increase our faith by reading God’s Word.

The morning message carried the same theme as the Sunday school lesson, pointing out that Matthew 7:7 gives promises to those who will ask, seek, and knock. We were told that when we ask for something in prayer, we will always receive an answer, whether it is “Yes,” “No,” or “Wait.” We also heard that when we need something that is within God’s known will, we should ask to receive; when we are not sure of God’s will, we should seek; and when an answer has been promised, but is delayed, we should knock. A good time of prayer followed the service.

Our last meeting took place in the evening and was an ordinance service. It began with prayer offered by Brother Eladio. Then Sister Cesibel led us in singing. During the announcements, we learned that all the churches in Peru had been given electronic tablets loaded with the Apostolic Faith Sunday school curriculum. Also, that a teacher workshop is being planned for next April or May. And the next camp meeting is scheduled for August 2-9 of next year, should the Lord tarry.

Brother Rogelio gave the ordinance message, reading from Exodus 12:1-12 and Matthew 26:17. He encouraged us to examine our hearts to make sure that we are right with God before partaking in the Lord’s Supper, knowing that the emblems represent the broken Body and spilled Blood of Jesus. After the message, the ministers gathered together and consecrated the Lord’s Supper in prayer, and then served it to the congregation. The service ended with all of the Peruvian people coming together to sing a beautiful worship song, followed by an extended period of fellowship and many hugs all around!

We are truly grateful to have had this experience at the Peru camp meeting and pray that the Lord will immensely bless the people of Peru as they strive to move the Lord’s work forward.

The Ajayis are scheduled to remain in South America for another week, traveling first to Argentina and then Paraguay, while Sister Catey and Sister Sarah return home on Saturday, August 10. 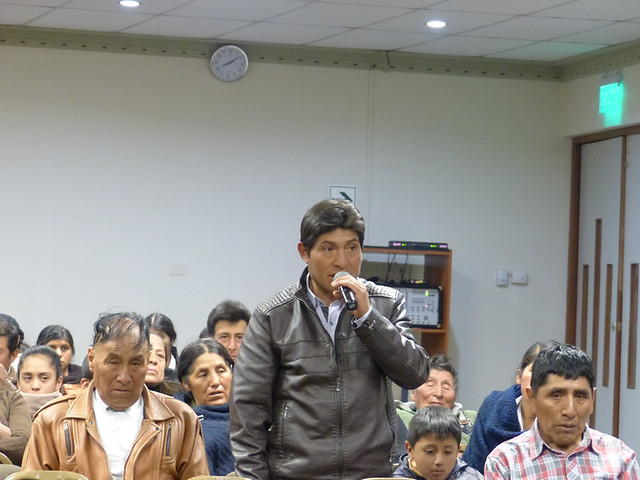