The tenth anniversary celebration for the Apostolic Faith Church in Calgary, Alberta, Canada, was held on September 4-6, 2020, at the Victory Bible College in Calgary. Attendees came from within Calgary, Lethbridge, and Edmonton, Alberta, as well as Winnipeg, Manitoba. There were also online attendees from various time zones around the world, and all the services were streamed via Zoom and YouTube. The theme of the celebration was taken from Psalm 118:23, “This is the Lord’s doing; it is marvellous in our eyes.” The services were a wonderful time of fellowship, especially in these unprecedented times.

The Friday evening service began with a prelude from the pianist followed by a welcome address from Mary Fasola, the group leader in Calgary. A woodwind duet included the selection “Ancient Words,” followed by a children’s presentation in which they marched in singing a welcome song and giving recitations thanking God for His continued help during the past ten years. A mixed quartet sang “Thanks, Thanks” and “Jesus, We Just Want to Thank You,” followed by a ladies’ quartet singing “10,000 Reasons.” Yemisi Ajayi led the congregation in singing several songs, after which Wole Ajayi led the opening prayer.

Due to the COVID-19 pandemic, most of the leaders from branch churches inside and outside of Canada were unable to physically attend the meetings, but they sent recorded greetings and sermons. In his recorded message, Chris Hewlett, District Superintendent of Canada, read Ephesians 3:14-21, and sent greetings on behalf of the headquarters church in Roddickton, Newfoundland, as well as all the branch churches from coast to coast in Canada. He thanked Sister Mary and all the Calgary workers for their efforts in spreading the Gospel over the past ten years. After the greetings, the choir sang, “Oh, the Glory Did Roll.” Several victorious testimonies were given, including Kunle Mofolasayo, from Edmonton, who had previously lived in Calgary, and he expressed how happy he was to see how the church had grown in number. Eunice Bolade, from the United Kingdom, Great Britain, who also lived in Calgary during the early stages of the work, testified to the glory of God.

Before the recorded sermon by Brother Chris, Jayne Agunu sang “In the Garden.” The sermon text was taken from Joshua 1:2-3, where Joshua commanded the Children of Israel to cross the Jordan River into the Promised Land. Brother Chris brought out that just as Joshua encouraged the Israelites, “Only be thou strong and very courageous” (Joshua 1:7), Christians can be confident that God will give them victory in their spiritual battles when they put their trust in Him. Sister Mary made some remarks before Sister Eunice gave the closing prayer.

On Saturday afternoon, the youth meeting began with Brother Kunle playing several selections on the piano, including “Holy Spirit, Thou Art Welcome in This Place.” Songs by the youth choir set the tone for the service. Foluso Oladunni, the group leader in Edmonton, gave the opening prayer. After a welcome and introductory message, Sister Mary turned the service over to the moderators and panelists, which included singles and married couples. The topic was on “Relationships,” and the panelists answered various questions about relationships from those present, as well as online viewers.

An evangelistic service was held on Saturday evening, which began with a medley of songs from the pianist followed by a choir number “Majesty.” A violin and piano ensemble played a beautiful classical piece followed by a quintet singing “Jesus Shall Reign” and “Guide Me, O Thou Great Jehovah.” The youth choir sang a beautiful rendition of “Imela,” which means “God Has Done Well” in the Nigerian-Igbo dialect. Another song, “Through It All,” by a different quintet inspired the listeners as they reflected on the past ten years of God’s faithfulness. Uche Okafor led the congregation in singing “This Is the Day” and “I Sing the Mighty Power of God.” A prerecorded greeting from Darrel Lee, Superintendent General, thanked the congregation for working together to establish the church in Calgary and for ten years of victory. Another greeting from the United Kingdom admonished the congregation to hold on to God as He leads them every step of the way. The last special was sung by a ladies’ trio titled “The Blood.” In his recorded message, Bob Downey, Director of North America Work, reminded the congregation that the main desire is to see souls saved. He took his text from Psalm 118:23, the theme verse, and brought out that while the congregation looks back at the past ten years and sees what God has done, at the same time, they can look forward to what the Lord will continue to do as they expect great victories ahead.

The Sunday school session and morning devotional service were held online via Zoom due to the unavailability of a suitable venue. Notwithstanding, the presence of the Lord was felt in a mighty way. Sunday school classes were available for the beginners and primaries, and the adult class was taught by Joshua Idowu, the pastor in St. Louis, Missouri. The lesson was titled “In the Beginning” and highlighted God’s Creation of the world as well as the existence of the Holy Trinity.

Marjorie Reid, the pastor in Fort McMurray, Alberta, gave the message for the devotional service. She read 1 Samuel 7:11-14 for her text, “Hitherto hath the Lord helped us.” She encouraged the congregation to seek the Lord with all their hearts because He is their sure foundation, even in this present time. She brought out that anniversaries are memorials to commemorate the victories that God has given, and she stressed the need to build an altar in their hearts just as Samuel built an altar unto the Lord.

Sunday evening was a historical recap of the work in Calgary and an evening of music. It opened with a brass and piano ensemble playing “Abide with Me,” followed by a trumpet solo, “Sweet, Sweet Spirit.” Then the children presented Bible recitations on thankfulness and reasons why they were thankful. They also sang “This Little Light of Mine” and other songs. Recorded greetings from around the world were played, including from Bayo Adeniran, District Superintendent of West and Central Africa, and Isaac Adigun, District Superintendent of United Kingdom. Recorded testimonies were also played from those who had been a part of Calgary’s success over the past ten years. The final special, sung by the choir and titled “I Can Almost Hear the Sound of the Trumpet,” inspired the congregation and reminded them of their hope as Christians. Brother Wole gave the closing prayer, thanking God for this time of celebration and asking Him to help them be worthy to meet together one day in Heaven.

The anniversary celebration was a wonderful reminder of God’s faithfulness, and an encouragement to all who attended. The congregation in Calgary is grateful for God’s protection during this pandemic, and for how He has brought them from a small beginning to where they are today! 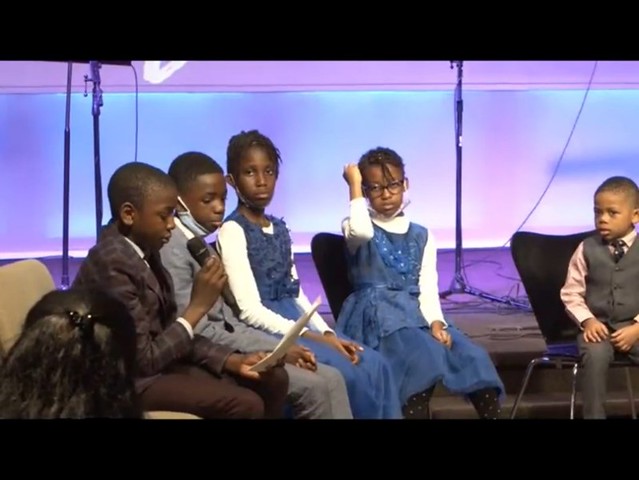