Children Enthusiastic for VBS in India

A group from Oregon, including Deanna Moen of Portland, Peter and Heidi Sletmoe of Grants Pass, and Jane Burton also of Grants Pass, is visiting India to attend the Vacation Bible School (VBS) sessions, which are held annually among our churches there.

They arrived a few days before the start of VBS, and on Sunday, November 17, visited three churches for services: Durganagar, Pedapudi, and Kaikavolu, our India headquarters church. They said the services were blessed and followed by wonderful prayer meetings. At the Durganagar church a woman testified that she and her husband plan to be water baptized at the next opportunity. Then in Pedapudi, six more said the same. This is a big step of faith as there is persecution in India for this action. It was clear to the group visiting that God is speaking to hearts at these locations.

The first VBS session was held on Monday, November 18, at the Kapavaram church, pastored by Jaya Raju. Sister Jane wrote that this church sits on a beautiful piece of property overlooking green rice fields and coconut trees. The service was held outside under a large tent that was purchased last year. A concrete slab is still needed under the tent, but for now tarps were spread on the ground. About thirty-five children, along with twenty adults attended. The Bible lesson was on the parable of the wise man and foolish man who built their houses on different types of foundations. The children loved the song that went with the lesson, especially the part where the foolish man’s house collapsed. Each time, they enthusiastically clapped their hands together while yelling, “SPLAT.” Other songs were sung too, and the Sletmoes added to the fun by accompanying with their ukuleles. The remaining activities included playing games, learning a memory verse, and prayer. Sister Jane said the children had a happy time.

On Tuesday, VBS was held at the Thammavarim church where P. Augustine is the pastor. This congregation has been meeting in a borrowed cane-thatched hut for years, and is praying God will provide land for a permanent place of worship. For VBS, tents were set up outside along with lights and a PA system. About sixty children attended and were accompanied by forty adults. The children whole-heartedly joined in every activity. The game they seemed to love the most was the “Bucket Brigade.” Two children at a time were given a question pertaining to wise and foolish choices. When they had the answer, they were to grab a bucket and shovel, put on a hard hat, and run to a horn. The first to honk the horn and answer correctly won a candy prize. By all accounts, everyone had a great time.

Two churches combined for VBS on Wednesday: Kathapudi and A.V. Nagaram. The pastor at both is P. Yesu Ratnam. The visitors from Oregon said the Kathapudi village is very unique with winding roads among the houses. The congregation held a church service for the adults before bringing eighty-five children into the small building for VBS. The visitors reported that the children came in excited, lively, and ready to go! They had a wonderful VBS session, and at the close there were many earnest faces as the children prayed.

The next day, Sister Deanna hosted a tea party for the pastors’ wives. Sister Jane said the tables were decorated beautifully and included paper teapots holding little treasures inside for the women. Also, three-tiered serving trays displayed egg salad and chicken salad sandwiches, cupcakes, and homemade sweets, which Sister Deanna had brought from home. The three ladies from Oregon dressed up for the occasion, wearing Saris, and said they had an amazing time of fellowship.

VBS is expected to continue through November 30 at various locations. We pray the Gospel seed that has been planted in the hearts of these children will take root. 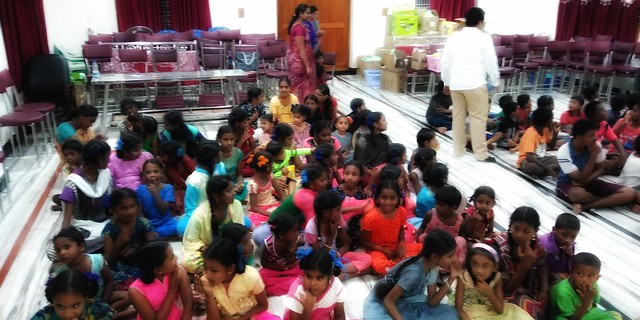