The Apostolic Faith Church in Columbus, Georgia, recently changed locations. On Sunday, February 17, a dedication service was held at the new facility. The seventy-two attendees included the Columbus congregation and delegates from Carrollton and Atlanta, Georgia; Anniston and Birmingham, Alabama; Kingstree, North Carolina; Orlando, Florida; and Richmond, Virginia. Each pastor or representative had the opportunity to give a short message of encouragement. Edward Dixon has pastored the Columbus church since 1996, and his wife, Lessie, shared a brief history of the work there.

In the early 1930s, Lucille Glenn became the leader of a small group of women in Columbus who gathered to worship. While visiting a neighbor who was sick, Sister Glenn met a woman who gave her an Apostolic Faith paper. The paper stirred a deep desire in her heart to learn more about the Apostolic Faith people. She began corresponding with Kindness Houston, who had moved from Birmingham to Portland, Oregon. She eventually made contact with Florence Crawford, the pastor in Portland, and in 1934, she and her daughter, Pearlie Hines, traveled by train to meet Sister Florence and learn more about the work. After their return, the work began to spread throughout the southern United States, and Cato Bush, the first Southern District Overseer, along with others, would visit the group in Columbus from time to time. Charlie Wheeler and his wife, Annie, opened their home for services to be held, and in the early 1940s, the group was able to build a church. The Wheelers’ son, Henry, was the first convert in the new church, and he was appointed pastor after the death of Sister Glenn in 1972. Brother Henry purchased a piece of property with an abandoned house, which he renovated into a church. In 1974, the church on Dawson Street was dedicated, and that was the location of the Columbus church until October 2018.

Brother Henry retired from the pastorate in 1996, and Brother Edward was appointed as pastor in Columbus. He and Sister Lessie first came in contact with the Apostolic Faith Church in 1976, when a young lady selling Avon came by their apartment. She invited them to church, and the Lord wonderfully established them as they raised their seven children in the Gospel. The neighborhood where the church was located became unsafe for the congregation, and they relocated to a home, where they held services. As they fasted and prayed, the Lord led them to a storefront that was for lease. Brother Edward and the church people renovated the space, transforming it into a place of worship.

The dedication message was given by Nathaniel Segres, the pastor in Atlanta. He spoke about “change” and how it is sometimes hard, yet God can turn “change” into a good thing. He brought out that the church is not made of wood and ceiling tiles, but it is made up of God’s people and the Holy Spirit dwelling in them. He encouraged the congregation to look to God to bring the increase as they spread the Gospel in their new location.

Eugene Segres, District Superintendent of the Southern and Eastern Churches, gave the dedication prayer. The Spirit of God could truly be felt throughout the church, and the prayer is that many will be drawn to hear the Gospel message and be saved. 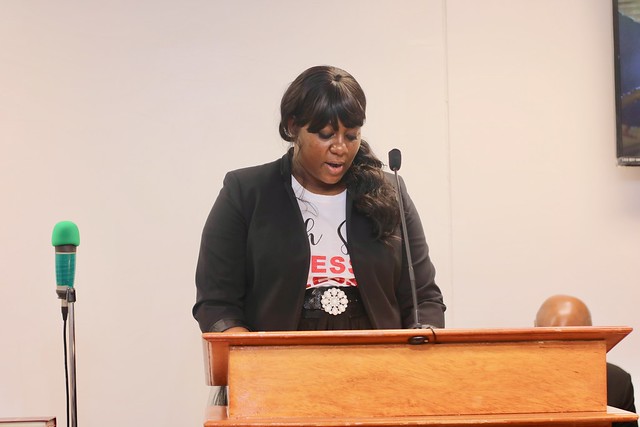