Another report from among our United States churches has come in. This one is from Reston, Virginia, where our Washington D.C. congregation has been encouraging a group since 2007. On Sunday, January 10, the two congregations came together to dedicate a new facility, which will allow the Reston saints to meet with more frequency.

This group formed when a member of the Washington D.C. church, residing in Northern Virginia, began ministering to clients and friends who frequented his auto repair shop. He saw a hunger for the Gospel in the hearts of these people and relayed this information to his pastor, Josephine McElveen. She prayed about the spiritual need in this location and then talked to the district superintendent about the possibility of starting an outreach ministry in Northern Virginia. It was decided that a work in that area would begin as an extension of the D.C. church.

The first service of the Northern Virginia fellowship was held on Sunday, November 4, 2007 in a rented chapel with about sixty people in attendance, and the Spirit of the Lord’s approval was upon the service. Since then the group has continued to meet in the chapel on Sunday evenings for evangelistic services, and also in another location on Wednesday evenings for Bible study.

With tremendous support from the D.C. congregation and regular evangelistic outreach efforts, the fellowship, which now numbers about eighteen, has experienced many milestones and victories. In 2009, they began holding cottage prayer meetings and that year two testified to receiving salvation and sanctification. In 2012, they held their first annual concert and a second annual youth revival service. 2012 also saw the conversion of a prison inmate. In 2013 a woman was healed of elephantiasis, and three more received salvation. In 2014, the group was able to purchase a van and the concert that year had forty-five in attendance. In 2015, a young man who had been a drug addict surrendered his life to Christ, and a new facility was found, which will allow for Sunday morning services.

Following is a report of the dedication service for this facility:

A dedication service was held on Sunday, January 10, 2016, at the Glades Community Center, which will serve as the new meeting place for the saints in northern Virginia. About ninety-five were in attendance from Maryland, New York, Virginia, and Washington, D.C., filling the center to capacity.

The dedication service began at 11:00, with the orchestra playing “Just a Little While.” The choir and organist provided another number before Pierre Sukou sang “Jesus Is Passing This Way” and “Lead on, Lead on.” Then Bernice Ogunsemore, a minister at our church in Brooklyn, New York, gave the opening prayer.

Reston residents and those who had been worshiping with the Reston fellowship from the inception were given the opportunity to testify. George Cooper, who has lived in Reston for thirty years, praised God for how association with this group had unified his family and enabled him to draw closer to the Lord.

Andrew Yankey gave thanks for the miraculous provision of the new facility as well as for God’s spiritual and financial provision. A senior, Mercy Njoku, also thanked God for the new facility, and Rochelle Koroma expressed gratitude for the impact the fellowship has had on her life.

A history of the Reston work was presented in pictures and videos. It showed how the work had progressed, and also acknowledged the workers who had been called to help. Following the presentation, Chindima Okwum-Emulo gave a violin solo.

Next, the ministers joined Sister Josephine in offering a prayer of consecration for Oludare Owolabi who will lead the work in Reston, and for his wife, Victoria. As the ministers laid hands on them and prayed, they were moved by the presence of the Holy Spirit. After praying, Sister Josephine advised the two, “Stay faithful, and God will send you what you need.” Then she said to the congregation, “May all who enter this building from this day forward feel the presence of God!” She also gave a short admonition to the leadership taken from Jeremiah 1:4-8 and 2 Timothy 4:5.

Reading from 2 Kings, chapters 22 and 23, which give the account of King Josiah, Sister Josephine dedicated the facility “for God’s use, both day and night.” Then she gave the dedicatory prayer. As she was joined by the other ministers, the presence of God was strongly felt.

Following the dedicatory prayer, a quartet sang “Once I Wandered Alone in Distress,” and the Chair of the Board of Trustees, Ebenezer Nettey, read from Revelation 4: 7-8. Then Sister Jumoke sang “A Mighty Fortress Is Our God.”

The dedicatory sermon was given by Ayodele Mobolurin, Assistant Pastor in Washington, D.C., and was titled “An Encounter with God.” Using Genesis 28:10-22 as his text, Brother Ayodele encouraged the Reston group to be ready to welcome people who are in need of an encounter with God. He said that as God prepared a place of rest for Jacob, they should prepare a place for those running from their troubles. At the close of the message, Brother Ayodele prayed for the facility, asking God to make it a “soul-saving station” where blessings and healings would flow. He also prayed that every distressed soul who wandered in might find a refuge and solace.

The Reston congregants covet our prayers and support as they continue their fellowship in this new facility. 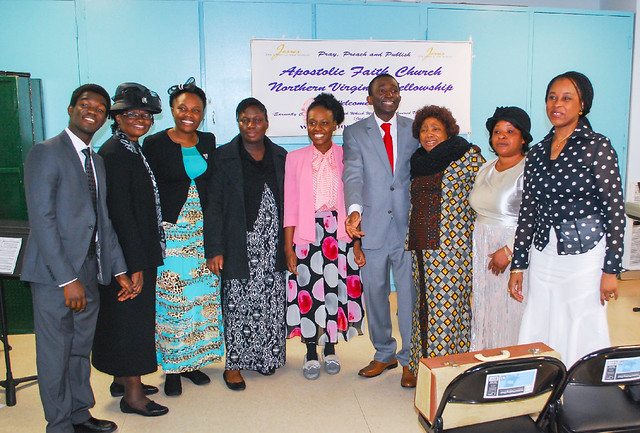