The public installation service for Deivys Pichardo as the Dominican Republic District Superintendent was held on Sunday, June 9. Debbie and I were there, along with Tim DeBusk, Director of Eastern Caribbean Work, and his wife, Lisa.

Brother Deivys, who was appointed on Feburary 2, opened the service by greeting the congregation and us. There was a choir selection, followed by congregational singing and prayer, and then he turned the meeting over to me. I extended greetings from Portland and then spoke on how leaders are appointed in the Apostolic Faith organization.

I explained that while the Portland headquarters is responsible for making the appointments, we do so only after conferring with local board members and veteran pastors. Any prospective appointee must meet the criteria set forth by the Apostle Paul in his writings to Timothy and Titus. In addition, they must have a stable spiritual life and home life, a long history of supporting church leadership, and loyalty to Biblical doctrine and the practices of the Apostolic Faith organization. After identifying the many who meet this criteria, the final decision is made through prayerful consideration to discern the will of God.

Continuing with the installation service, and following the Biblical model, we presented Brother Deivys to the congregation and then the board members and platform ministers laid hands on him and prayed over him. After this, the congregation was given the opportunity to show their support of the appointment by standing. They stood in unison giving thanks to God for the decision made.

Brother Deivys then introduced several new pastors and ministers. They assembled in the altar area, and the board members and ministers prayed over them also.

A choir selection followed, and then Debbie and Sister Lisa shared their testimonies. The choir sang again before Brother Tim brought the message speaking on the power of God to save the soul. A time of prayer followed and afterward, we gathered outside to enjoy a Sunday afternoon feast. 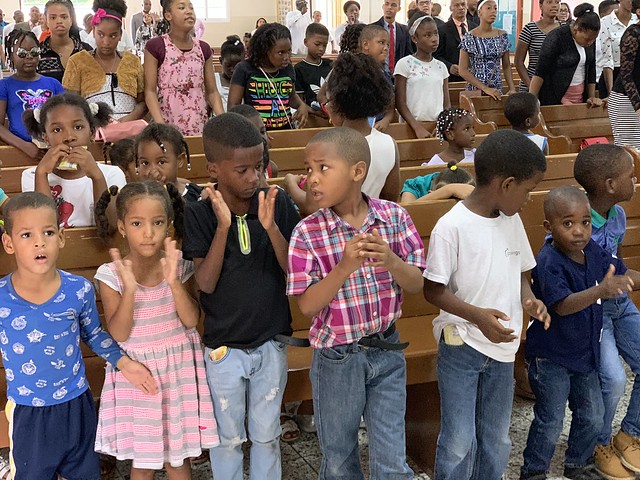