Debbie and I are in the Dominican Republic along with Tim DeBusk, Director of Caribbean Work, and his wife, Lisa. We arrived close to midnight Monday, and were able to attend a service the next evening at one of our Boca Chica churches, Altos de Chabon. This new building, which was dedicated last month, seats approximately 125 and was filled to capacity.

Veteran pastor and Dominican Republic board member Gledwin Mills led the service, requesting prayer for District Superintendent Alberto Smith who has been ill for several days. Brother Mills also publically presented us with the Spanish transcription of a 2008 Portland camp meeting sermon he had enjoyed when he was present.

The Alto de Chabon pastor and builder of the church, Evaristo Guerrero, testified and spoke to us later about how it was only through the help of the Lord that he was able to acquire the property and build the church. Debbie and Sister Lisa also shared their testimonies. Rosa Wallace was the interpreter for the evening and did a great job.

The local choir sang several selections throughout the service, including one before Brother Tim brought the message. In the sermon, he emphasized that Jesus is everyone’s friend, but also wants to be our Savior.

Our Wednesday began early and included a four-hour, round-trip excursion to Santo Domingo to pray for and visit with Brother Alberto. As we sat with him in his living room, we found him in good spirits and believe that he will soon be back on his feet.

In the evening, we returned to Santo Domingo for the service at our Los Tres Brazos church where Mercedes Henriquez has led the congregation as pastor since 1993. This is one of our newer Santo Domingo church buildings. It is not quite complete, but is expected to be dedicated in the near future.

Approximately 150 were present, which again was the seating capacity. The local choir carried the special music for the service, doing a great job, just as was done the night before by the choir in Boca Chica. Everyone from our team testified, as did others. Tonight’s interpreter was a young woman named Deborah Bozo. She did very well.

With so many youngsters present, it seemed appropriate to bring a message from John 6:9 where Andrew told Jesus, “There is a lad here . . .” The young boy in the Bible didn’t have much to offer Jesus, but he gave what he had, and Jesus asks us to do the same. Following the message was a time of prayer, and then we were invited next door for snacks hosted by one of the sisters of the church.

We are enjoying our time among the Dominican saints and look forward to the rest of the week. 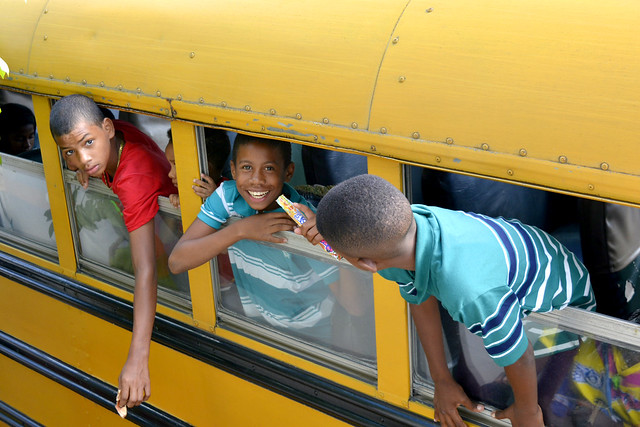