Randy, Oscar, and I arrived in Lusaka on Saturday evening in anticipation of the Zambia Easter camp meeting. At the airport, we were presented with flowers by a little girl before being greeted by Timothy Kaibula, the Eastern Africa District Superintendent, and a delegation of ministers and their spouses. They formed a line to shake hands with each of us. Oscar was included, and went down the line like a gentleman, making eye contact and smiling as he shook each hand.

On the ride to our hotel, we could see that Lusaka is a very modern city. In addition to being the capital, it is the largest city in Zambia with a population of 4 million. Of our ninety churches in Zambia, eight are located here, including the Eastern Africa headquarters where the annual camp meeting is held.

The next morning, we began our Easter celebration with Sunday school. Many of the classes met outside and were scattered throughout the campground. Oscar said he lost count at ten. The lesson was on submitting our minds to God by thinking on things that are pure and letting God direct our decisions.

The morning worship service was well-attended with about 1500 people inside and an overflow of about 1000 standing outside. The service began with the orchestra playing the “Star-Spangled Banner” as the ministers came in and took their places on the platform. Then, the Sunday school children marched in, singing, and waving flags pertaining to the different countries represented at the camp meeting. They presented a program of singing, recitations, and a skit depicting the five wise and five foolish virgins. This brought out the camp meeting theme of “Behold, He Cometh,” and was a reminder to everyone to be ready for the Rapture.

The congregational singing followed, and to accommodate the different languages spoken at the camp meeting, four songbooks were used, with the song leader calling out all four page numbers with each selection. During the formal welcome, Brother Timothy noted that delegates were present from several countries including Angola, Botswana, the Congo, Malawi, South Africa, Tanzania, the United Kingdom, and Zimbabwe.

The choir sang beautifully throughout the service. Before the Scripture reading from Luke 24, they sang “The Resurrection Morn” and before the message, “I’ll Be Waiting in Paradise.” The sermon was taken from Luke 24:18, “And the one of them, whose name was Cleopas, answering said unto him, Art thou only a stranger in Jerusalem, and hast not known the things which are come to pass there in these days?” It focused on having Jesus as our Savior and not a stranger. A good prayer meeting followed.

In the afternoon, most everyone from the morning’s activities remained for a youth service, and then in the evening, an evangelistic service concluded our Easter celebration. In both meetings, beautiful music was presented in a variety of languages. In the evening, the choir sang “Redeemed, How I Love to Proclaim It!” in English, “Heaven Came Down” in Bemba, and “Joy in the Camp” in Tonga. Several victorious testimonies were given in each service, and the afternoon message was preached by Randy while the evening message was given by Audrey Nkhata of Malawi. A good time of prayer followed both services.

We enjoyed Easter with the saints in Zambia, and are looking forward to several more days of camp meeting before returning home on April 6.

(Click on image below to scroll through photo album.) 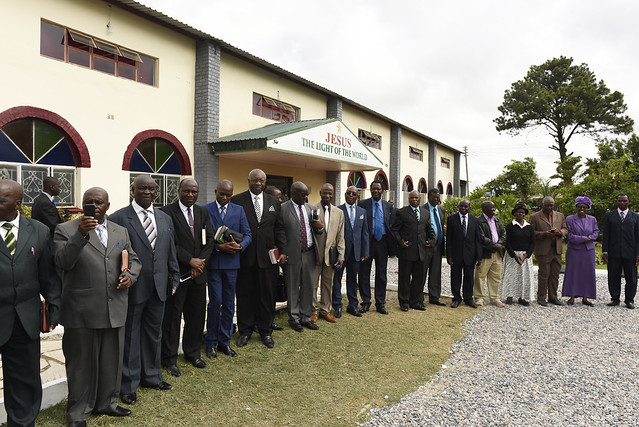