The annual Chile camp meeting began in Chimbarongo on Sunday, February 10, with six from North America attending. Led by Sam Ajayi, Director of South America Work, the team of six includes his wife Shade, Catey Hinkle, and Savannah Lee all of Portland, Oregon, as well as Rachel Boyce of Dallas, Oregon, and Cynthia Fasola of Calgary, Alberta, Canada.

The team is excited to be among the saints in Chile and participate in this year’s camp meeting. They have sent the following report, written by Cynthia Fasola and Savannah Lee, of the first few days’ activities.

We were welcomed on Sunday to the 2019 Chile Camp meeting with many happy greetings, wonderful food, and music.

For Sunday school, Israel Monardes, the Chile District Superintendent, taught the lesson on respecting and obeying those in authority. He said that when we do this, blessings are sure to follow. He also brought out that when earthly laws conflict with God’s Law, we are to obey the higher power. Using Daniel as an example of this, he said that when we seek to obey God, He will help us in the hard places.

In the Opening service of camp, the visitors from the United States and Canada were introduced, bringing greetings from headquarters, and were well received. Then the service continued with beautiful music provided by a guitar and mandolin orchestra whose members also sang and helped lead the congregation in songs.

Brother Israel gave the Scripture reading from Mark 2:13-16, and Brother Sam delivered the sermon from Mark 10:17-22, bringing out this year’s camp theme of “Follow Me.” We learned that we are to take up our crosses and follow Jesus completely, not part of the way. Brother Sam encouraged us to use this camp meeting to make the decision to follow Jesus all the way.

On Sunday evening, new hymn books were handed out, which include many of the hymns we are familiar with in Portland. During the testimony portion of the service, Sister Shade told about growing up in a Muslim home. Then she said that after taking a nap one afternoon, Jesus introduced Himself to her by telling her she was worshipping jewelry and needed to serve Him. She took off her earrings and went to inquire about God from a classmate who attended the Apostolic Faith Church. She was invited to a service, and the Lord saved her and has kept her for over forty years. A woman from our church in Limavida, Peru, gave her testimony about getting saved young and being glad to come to church rather than being out in the world. A man from Chile also testified, saying he was thankful for all the times God had healed him.

Before the sermon, Sisters Cynthia, Rachel, and Savannah sang a trio. The evening message spoke of God showing His grace and glory to Moses. It was brought out that God specializes in doing the impossible, and He will be with us in every situation, showing His strength and power on our behalf. All we need to do is ask the Lord to help, and open our hearts to be willing to receive it. As we do this, God will open the windows of Heaven, and His blessings will flow down upon us.

There were no scheduled services for Monday during the day, so a number of the young people organized an impromptu tour of sites across Chimbarongo.

Instead of an evening evangelistic service, the annual “Evening of Music” was held, and everyone in attendance was encouraged to join in lifting their voices to God in songs of praise. The service opened with the congregational song “Since Jesus Came into My heart” in Spanish. Then Eladio Retamal-Vasquez, pastor in Limavida, Peru, and Ricardo Fabian followed the congregation’s hearty rendition with a duet while accompanying their beautiful singing on their guitars.

Throughout the service, Roxana Becerra, the wife of Brother Monardes, led the congregation in singing such songs in Spanish as “Hay Una Ciudad” (There is a City) and “Hay Poder en La Sangre de Jesús” (There is Power in the Blood of Jesus). Later, Sister Roxana and her younger sibling, Angél, implored the Holy Spirit with their voices to “Muéve en mi” (Move in me). Following this, Brother Eladio again lifted up his voice in ardent praise with “Gracias, Señor” (Thank You, My Lord).

The team from North America was not left out. They provided a quartet, which sang “In the Sweet By and By” with accompaniment from the Chilean orchestra, and Sister Cynthia performed “Holy, Holy, Holy” and “Jesus Saves” on her violin. Then Mario Cordova, the retired Chimbarongo pastor, sang heartily with his family before Sister Catey gave her testimony, recounting how God delivered her parents from lives of sin, allowing her the opportunity to know God’s saving power.

Following the evening of music, there was a time of fellowship and a meal offered to those in attendance. We are thankful for God’s faithful presence throughout the services so far.

The Chile camp meeting is scheduled to continue through Sunday. We pray God’s blessings will flow throughout. 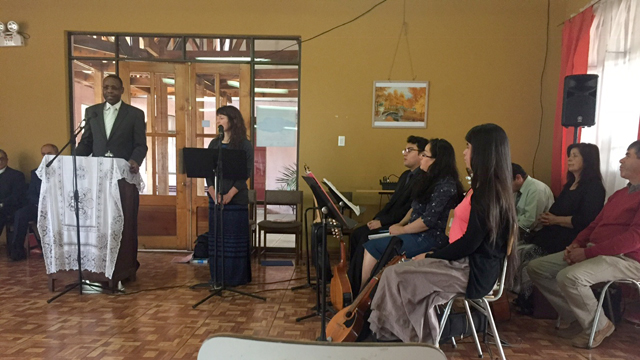