The eleventh annual India camp meeting was held Tuesday through Thursday, February 20-22, at the headquarters church in Kaikavolu. In preparation for the meetings, the saints fasted and prayed, and also went door-to-door in the village to personally invite people to attend. Then, the Sunday before, they rented a rickshaw and drove through the neighboring streets announcing the camp meeting and preaching the Gospel over a P.A. system. Many received the message with gladness.

Also in preparation for the camp meeting, all the saints gathered on the campground, held hands in a circle, and prayed that the Lord would bless. They asked that God would draw many people to the campground, fill the services with His glory, and abundantly save, sanctify, fill with the Holy Spirit, and heal.

Each of the services was held in the evening following a meal, which was served by the young men of Kaikavolu and was prepared in part by the women, under the supervision of Suvarna Raju. The first service, which ran from 7:00 to 11:15 p.m., opened with a prayer offered by the pastor’s mother. This was followed by congregational singing, and then Rayudu Raju, who is the District Superintendent of India and pastor of the headquarters church, welcomed the 1100 who had gathered for the camp meeting.

As the service continued, P. Yesu Ratnam, the pastor of the church in Kathipudi, gave a prayer for the preaching of the Word of God. Then K. Salmon Raju, the pastor at Gurajanapalli, preached. Taking his text from 1 John 1:7, he spoke on the Blood of Jesus, saying it has the power to cleanse from sin and to make one holy. At the close, the question was put to the audience, “Who is willing to be washed in the Blood of Jesus?” Twenty-six people raised their hands and were then led in a prayer of repentance to receive salvation. It was a glorious start to the camp meeting!

The next evening, 1600 came for the meeting. The pastor from Thammavaram, P. Augustine, opened the service with prayer. Then a quintet sang several specials. The pastor of the Yanam church, S. Raco Raju, prayed for the preaching of the Word, and before the message, Jesse Raju of Gurajanapalli sang. The message, given by Brother Rayudu Raju, was taken from Luke 10:30-37, the account of the Good Samaritan. He said Jesus can be likened to the Samaritan in that He does not avoid people with problems or illnesses, but instead ministers to them. He said Jesus desires to save, heal, and protect, and will do so for anyone willing to turn their lives over to Him.

There was a good response at the close of the message. Thirty-two stood indicating they wanted to pray and ask Jesus into their hearts. As the group was led in the sinner’s prayer, many repeated the words with tears. Then Pastor M. Samuel Raju of the Masakapalli church concluded the service with prayer.

On the last evening, as people began to arrive for the service, it soon became clear that there would not be enough parking spaces or places for people to sit. Additional parking was quickly secured within the neighborhood, and as many as could crowded onto the campground, with others listening from outside the fence. Nearly 2400 were in attendance.

Pastor K. Jaya Raju of the Kapavaram church began the meeting with prayer. Then the congregation sang songs of praise and worship. The official greeting, announcements, and prayer for the sermon were given by Brother P. Yesu Ratnam. Then Brother P. Augustine preached on sanctification from Joshua 3:5 and Leviticus 11:44. He said sanctification is very much needed to live a godly life in this sinful world.

Following the sermon, Sister Suvarna sang a special, and then a second sermon was given on the topic of receiving the baptism of the Holy Ghost. The texts of John 1:33 and Acts 2:3-4 were used to encourage those who are sanctified to continue in prayer until the baptism is received. The saints were admonished not to give up in discouragement if the answer does not come immediately. There was a good response to the two messages and many prayed earnestly afterward for the experiences of sanctification and the baptism of the Holy Spirit.

As the camp meeting came to an end, the India saints rejoiced in the blessings they had experienced during the three days, including good weather, safe travels at night on rickshaws and tractors, God’s presence in the services, and answers to prayer. The following Sunday there were many testimonies throughout the Apostolic Faith churches in India of spiritual experiences received. A tentative count reported that fifty-six prayed through to salvation, thirty-six were sanctified, and twenty-five received the baptism of the Holy Ghost. They request prayer for those who are now considering being baptized in water.

(Mouse over the image below to click through the album.) 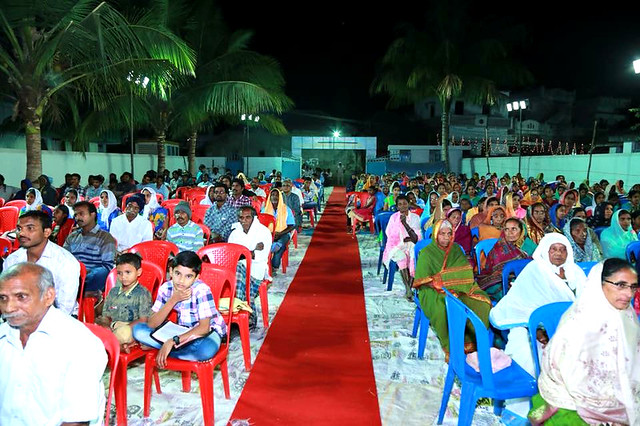