Joy in the Camp as Zimbabwe Camp Meeting Begins

The Southern Africa regional camp meeting began on Sunday, December 16, at the headquarters church in Harare, Zimbabwe, with representatives attending from our churches in Angola, Botswana, Lesotho, Malawi, Mozambique, Namibia, South Africa, and Swaziland. Representing the Portland headquarters, John Musgrave, Director of West and Central Africa Work, and his wife, Rodica, arrived in advance and noted that as the saints began to gather, happy to be at camp meeting, truly there was joy in the camp!

They sent details in the following report.

In preparation for the camp meeting, a workers’ meeting was held on Friday, December 14. More than two hundred gathered for the three-hour session, which focused on the topic of “Unity.” The next day, another session was held with about double the number of workers attending. This time the subject was “The Mission of the Apostolic Faith.” It was brought out that our mission and principles have always remained the same, and still do as we capitalize on newer methods of delivering the timeless message of the Gospel.

In the afternoon, a session was held to give an overview of the Primary Pals, Answer, and Search Sunday school curriculum. Our southern Africa churches have recently begun using the Primary Pals lessons, and plan to implement the Answer and Search lessons in the new year. We reviewed each of the lessons for this week, showing how they were designed to be used. We also discussed ways to tailor the lessons to differing student needs.

On Sunday, the camp meeting officially opened with Sunday school for all ages. The classes were dispersed throughout the church building and the adjacent cafeteria area. In the Primary Department, the students acted out a skit from the Primary Pals lesson titled, “Journey’s End.” In it, they depicted the Wise Men traveling to see the Baby Jesus. The girls showed more boldness than the boys, and as a result, it was a female King Herod who instructed three “Wise Women” to return to him upon finding the infant. It was fun to watch, and everyone did a great job!

There were about two thousand in attendance for the morning meeting, filling the sanctuary, wings, and balcony. The choir and orchestra sounded outstanding as they provided music throughout the service, including an initial orchestra number of “We Have Come into His House.” Oniyas Gumbo, the Southern Africa District Superintendent, welcomed everyone, and we enjoyed a wonderful service. At the close, there was a great response to the altar call, with people filling the altar area and spilling over into the seats. It was apparent that many were receiving blessings from the Lord.

A youth service was held in the afternoon, and one highlight was the testimonies. A young man thanked the Lord for providing the means for him to travel from Bulawayo. Then we heard from others who had faced hardships in getting here, but placed a premium on attending. It was impressive to see their determination to follow the Lord, and hear them tell of His faithfulness. Later in the day, we witnessed this situation again as three young ladies arrived from Namibia after traveling since Friday morning.

Before the message, a young lady sang “Fill My Cup, Lord.” Then Killian Nyamuona, the Zimbabwe youth director, preached from Psalm 34:11. He encouraged the young people to have the proper respect for God that will lead them to a closer walk with Him.

In the evening, Jameson Nkiwane, a Zimbabwe board member and pastor from Bulawayo, preached the message, taking his text from Genesis 3:8-9. He used a situation that happened on his way to camp meeting to illustrate that only the one who knows where you are can help you. His car had broken down just after arriving in Harare, and he had to contact someone and tell them where he was in order to receive help. In the sermon, he encouraged those who were not saved to call on Jesus and confess where they are to receive salvation.

The Musgraves are enjoying their time among the saints in Zimbabwe. Yesterday evening, they attended the annual concert. Let’s keep the camp meeting in our prayers as we look forward to additional reports. 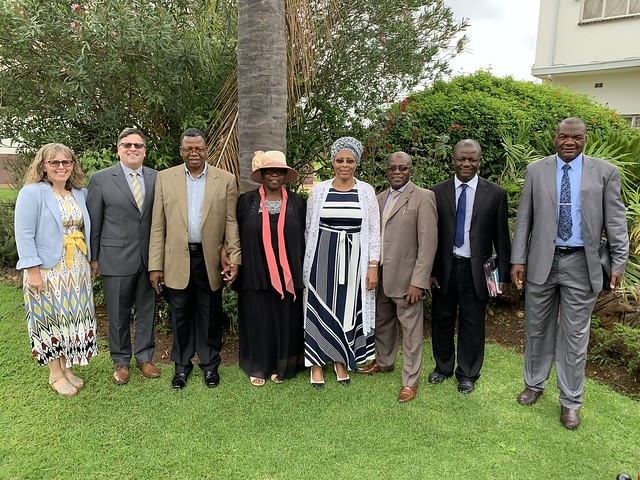