Our churches in the Maharashtra Province of India held a three-day pastor and spouse conference in Aurangabad this past week. It was led by Surya Gajbhiv, the Maharashtra District Superintendent. Two from the United States, Clark Wolfe of Portland, Oregon, and Johnny Wyatt Jr. of Brooklyn, New York, attended and gave a report.

They said the conference began on Wednesday, February 12, with a total of about 125 in attendance. In addition to pastors from our churches, five from Kolkata came with their spouses. They had been corresponding with members of the Apostolic Faith for some time, and adhere to the same beliefs and Bible doctrines that we do. They traveled for twenty-five hours by auto-rickshaw, train, and bus to attend.

Each day of the conference began with a song and then prayer. This was followed by a morning and afternoon session. In between, lunch was served in a meeting hall, and this provided a good time of fellowship. Some of the topics covered over the three-day period were “A Brief History of the Apostolic Faith,” “Bible Doctrines and Our Mission Statement,” “The Importance of Youth Work and Sunday School,” and “How to Prepare and Deliver Effective Sermons.”

Following the final session on Thursday, it was announced that Brother Surya had received his ordination paperwork. He was then formally installed, with several of the other ministers gathering around him to lay hands on him and pray. As the prayer ended, everyone stood to their feet with lively applause in support of his leadership.

On the last day of the conference, a baptismal ceremony was held at a nearby canal for twenty-six converts who had received salvation in the last few months.

The report closed with, “We thank you for your prayers for our health and protection, and that God would continue to move among our saints here in India!” 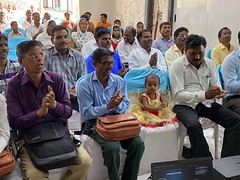