Mantle of Leadership Passes in the Philippines

Bill and Lori McKibben and Mark and Sylvia Staller continued their Asian trip in the New Year by visiting several branch churches in the Philippines and holding an installation service where a new District Superintendent of the Philippines was appointed.

On New Year’s Day, accompanied by Michelle and Michael Hancock, they first visited our church in Simimbaan where Rizaldy Caliboso is the pastor. The saints were there to greet them, and shared some refreshments after they toured the grounds and the church, which was dedicated in 1997 during the McKibben’s second trip to the Philippines.

The next church they went to is in the town of San Luis, and is pastored by Emily Lucero. Once again, the saints had gathered to greet the international visitors. After a time of fellowship and prayer for the work at that location, the team headed into the mountains to our church in Baguio City, the summer capital of the Philippines.

Baguio City is located at an elevation of approximately 5,000 feet, so it is significantly cooler than the rest of the Philippines. It is also forested with pine trees. The church is pastored by Josefino Aban. He gave a glowing report of how the Lord has been working in this area. In addition to this church, he is responsible for two outreach efforts. The first is at the Don Mariano Marcos Memorial State University, approximately sixty miles to the north, and the second is forty miles farther north. A number have been converted, sanctified, and baptized with the Holy Ghost in these areas in the last couple of years, for which we rejoice with the saints.

The following day, Thursday, the team spent some time sightseeing and then departed south to the town of Subic, where they were later joined by twenty-five choir members from the Bagong Sikat headquarters church for a day of team-building and other activities.

On Saturday, the ministers gathered in the morning for breakfast and a ministers’ meeting. In the afternoon, they enjoyed lunch and fellowship before a meeting of the Board of Directors.

The Sunday services at the Bagong Sikat church were quite full with over four hundred attending the morning service. Many had come to celebrate the third anniversary of the building. For the prelude, the piano and keyboard presented a lovely duet before the orchestra played. A special highlight was the choir song “All Rise,” featuring Josef Ruiz as the youth soloist. Brother Bill reported that it was quite stirring as the choir sang of the scene in Heaven when those who know the Lord will rise in everlasting praise.

Following the congregational singing and prayer, Brother Michael sang “Go Light Your World.” Then it was announced that Zenaida Ruiz and the Board of Directors had agreed that it was God’s timing for her to retire after twenty-five years as District Superintendent for the Philippines. Sister Ruiz was honored with flowers and a plaque of appreciation for her service, including as pastor of the headquarters church. Also, the congregation surprised her with a gift from the Filipino churches. They would be sending her to the Portland headquarters for the March meetings and a time of extended rest while visiting her son and daughter-in-law, Arthur and Trina Ruiz of Portland. The congregation applauded her for her faithful service and direction over the years.

A letter from Portland headquarters was read thanking Sister Ruiz for her service. It also outlined the model for appointing new leaders in our churches, as well as stated that I, along with Brother Bill, Sister Ruiz, and the Filipino Board of Directors had unanimously agreed that the mantle of leadership had fallen on Joseph Ruiz. As this was read, spontaneous applause erupted from the congregation as they showed their support for God’s choice. The Board of Directors gathered around Brother Joseph to lay hands on him, and prayed over him according to the Scriptural example. (You can read Brother Joseph's testimony from the January 2019 edition of our magazine here.)

The service continued with the choir singing “Find us Faithful.” Then Brother Bill preached from Hebrews 11:7 about Noah finding grace in God’s eyes, even in a wicked environment, and moving fearfully at God’s instruction to build an ark. He said the Gospel is like that ark, providing deliverance from judgment and a way to rise above the evil in the world. A sweet altar service followed the meeting.

An afternoon service began with the orchestra and choir providing the prelude. After congregational singing and prayer, Brother Joseph spoke of God’s goodness to him and his family, and he asked for prayer as he begins his role as District leader. A number of other testimonies were shared by Filipino and American saints as their hearts blended together in unity. Prior to the message, the choir again sang. Then Brother Mark took his text from Matthew 5:7, stating that those hungry for righteousness would be filled. He went on to explain that God is a Good Shepherd, not only leading His sheep but also feeding them, providing their physical needs. He then reminded everyone that Psalm 23:3 states, “He restoreth my soul,” which is the most important role of a shepherd. In closing, he invited all to pray at the generous table spread by a loving Lord.

Many returned to their home churches in the late afternoon after tearful goodbyes. The team is scheduled to visit four more branch churches on Monday, spend Tuesday sightseeing with saints, and then conclude this trip with and evening Bible study on Wednesday. They depart for South Korea early Thursday morning for the annual youth meetings there. 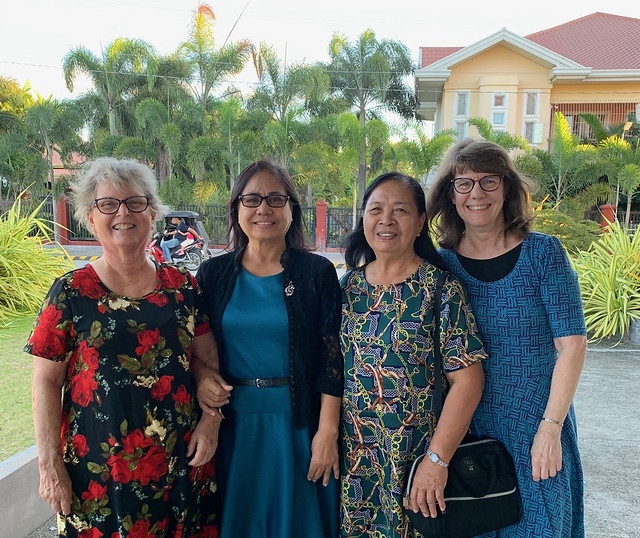