After leaving South Africa, Debbie and I traveled to Bulawayo for the annual Zimbabwe camp meeting, which began yesterday. This year marks the first camp meeting on the Bulawayo campground since ownership of the property went into dispute fifteen years ago. Prior to that, this location served as the headquarters for our Southern Africa district. It was a blessing to many, so a large number are expected to attend over the next few weeks, including all of the Southern Africa district superintendents.

We arrived a few days in advance of the camp meeting to participate in a workers’ meeting on Friday and a minister and spouse meeting on Saturday, as well as prayer meetings in the evenings. On Friday morning, as we proceeded to the campground, some of the Gospel workers stopped to greet us, and soon others joined them. Before we knew it, a long line had formed, and we were being greeted with a handshake by each worker in turn as we made our way to the meeting.

The meeting was held in a building near the tabernacle and a couple hundred people were in attendance. It began with singing and prayer. Then Onias Gumbo, the Southern Africa District Superintendent, introduced us and asked Debbie to speak first. Though she was not expecting to speak, she did well. The meeting continued with the theme of “Unity,” which has been apparent among the brethren since we arrived.

Saturday’s minister and spouse meeting was also well attended with every chair being filled, and the theme of unity was continued. In the afternoon, a Sunday school workshop was held.

The opening day of the camp meeting began with Sunday school for all ages, held in various classrooms around the campground. Then everyone came together in the tabernacle for the morning service. The choir and orchestra provided several beautiful numbers throughout. During the announcements, it was noted that representatives were in attendance from the neighboring countries of Angola, Botswana, Eswatini, Lesotho, Malawi, Mozambique, Namibia, South Africa, and Zambia. In addition, the host country of Zimbabwe was well represented. On behalf of the United States, I extended greetings from the Portland headquarters. Before the last special, which was a male vocal solo, the choir and orchestra took seats among the congregation, filling the sanctuary to capacity. Following the message, three rows of altars were full even before the invitation song concluded. We look forward to hearing testimonies later in the week of victories that were won.

In the afternoon, a vibrant youth service was held with many participating. In the evening an evangelistic service featured beautiful music, including a men’s a capella trio. The message was given by Chris Nkhata, the Malawi District Superintendent, on the theme of “Faith.” For an example, he told how God provided a job and directed him to it.

Monday’s event was to be “an inspirational evening of music,” and it certainly met expectations. Precious Bhosha conducted the music, including the choir as they sang several selections such as “Christian Walk Carefully” and “The Wonderful Grace of Jesus.” Many of the choir songs featured soloists, and some were performed in the local language of Ndebele. Throughout the evening, we heard a mix of vibrant and enthusiastic singing for songs, such as “Send the Fire,” and a more worshipful tone in some, including “Gentle Shepherd.” The first was sung with hand motions, and the second with hands folded. Something unexpected was when members of quartets who were scattered about would stand and sing a verse together. There were also several duets, including from one couple who are Gospel veterans. They sang “Search Me, O God.” Toward the close of the concert, an altar call was issued, and the altars filled before the last selection concluded.

We have had a wonderful first few days with the saints in Bulawayo. The camp meeting is scheduled to continue through Sunday, December 29, with Bible teachings each morning, evangelistic services in the evenings, and a variety of children’s and youth meetings in the afternoons. We pray these services will stir hearts and result in many victorious testimonies. 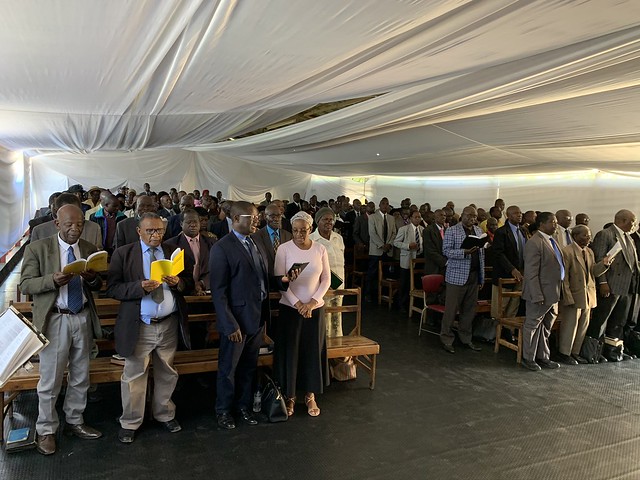