A weekend of revival services began Friday in Melbourne, Australia, with a concert. Brother Sam Ajayi said the choir and orchestra did a masterful job as they presented an abridged version of the concert performed at the Sydney camp meeting. One of the songs spoke of looking to God who is bigger than anything and everything one might face in life. He said this set the tone for the rest of the meetings.

On Saturday, during the first evangelistic service, one of the young people testified to receiving salvation on the last evening of the Sydney camp meeting. She said she is right with God and the devil can’t take that assurance away. Other testimonies included a woman who thanked God for delivering her from persecution at work. Also, a young man testified that salvation has had a tremendous impact on his life. He said he now prays about everything. He prayed about playing soccer and applied at several clubs, but was rejected. He continued to pray and was accepted at a highly rated club. He was also featured in the newspaper. He gave the glory to the Lord, saying it was God who helped him.

The message on Saturday focused on Jesus’ greatness and what it means for each individual. The Holy Spirit moved throughout the service, and before the sermon could be concluded, the altars filled with people seeking God. Brother Sam said a great time of prayer followed.

The Sunday services began with Sunday school. The children presented a song and then everyone went to their classes. There was much participation in the adult class as they studied the character of Abraham and how his obedience brought the blessings of God.

The morning sermon was taken from Genesis 16:13 where Hagar said, “Thou God seest me.” Brother Sam said another wonderful altar service followed the meeting.

During the evening service, two couples brought their babies to be dedicated and then testified afterward. The first couple thanked God for answering their prayers and giving them a son. They also testified to how God protected the baby when their two-year-old pulled him out of his chair. The husband of the second couple testified that his daughter was stillborn, and his wife was in intensive care for four hours after the birth. He said he cried out to God in agony, and the Lord answered, reviving the child and stabilizing his wife.

The sermon was taken from Mark 6, which gives the account of Jesus feeding five thousand with two fish and five loaves of bread. The congregation was admonished to remember all that the Lord had done during the weekend meetings and continue in the strength of His power, grace, and love.

Brother Sam said the feeling among the saints as the Australia meetings conclude is that they have been refreshed, renewed, and revived their spirits. We thank God for His goodness as we continue to pray for the work in Australia. 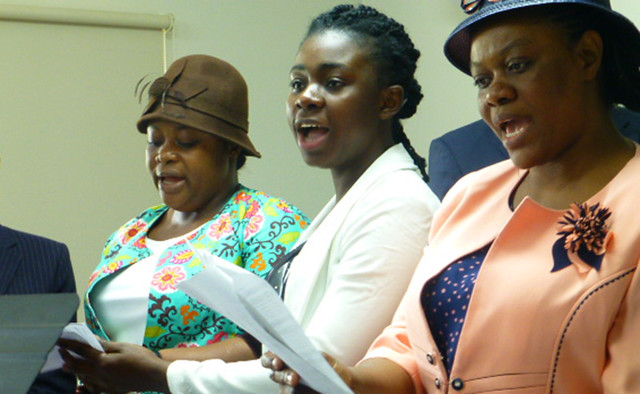 (Mouse over the image above to click through the photo album.)
Previous Next