I arrived in Johannesburg on Thursday, October 25, for the final weekend of the South Africa camp meeting, and was received by a large delegate of southern Africa board members representing our work in several countries. After greetings and a short visit, we dispersed to prepare for the next day.

Three services were held on Friday: a morning teaching on sanctification, an afternoon youth service, and an evening evangelistic meeting focused on divine healing. The latter message was delivered by Chris Nkhata, the District Superintendent of our Malawi work.

Saturday began with a meeting of board members from all over our southern Africa district. This was followed by an ordinance service in which we observed the Lord’s Supper and Foot Washing. Then, in the afternoon, a water baptismal service was held for thirty-five new converts. We praise the Lord for these souls and pray He will strengthen and encourage them.

In the evening, we enjoyed a fabulous youth concert. The choir sang beautifully, the orchestra was excellent, and all of the selections were inspired. We can be very proud in the Lord of our work in South Africa.

The next morning, after Sunday school, the devotional service began with a short children’s program followed by selections from the choir and orchestra. There were perhaps three hundred in attendance, completely filling the tabernacle, which was dedicated when I was here in March with my son, Randy, and his son, Oscar.

We sang only one congregational song in order to leave more time for the announcements, which included the retirement of Edie Sadike as the South Africa District Superintendent and the installment of his successor. We expressed our appreciation to Brother Edie and his wife, Ruth, for twenty-three years of service in this office, beginning on December 7, 1995. Under his leadership, the work has grown and remained stable even in times of adversity.

Before naming the successor, a brief explanation was given of the Biblical model of appointing those called by God to assume leadership. It was then announced that Confidence Nemaungani, whose father, Gerson, had held the same office until his death in 1995, would assume the mantle of South Africa District Superintendent. The response from the congregation was overwhelmingly positive; a spontaneous roar of support went up and reverberated throughout the tabernacle for some minutes.

Earlier in the day, Onias Gumbo, the Southern Africa District Superintendent, and I had met with Brother Confidence and his wife, Monica. They are wonderful people with three teenage children. He was raised in this Gospel, received salvation as a young man, and has served the Lord in many capacities including as a Sunday school teacher, interpreter, finance chairman, and board member.We know God will guide him in this new endeavor.

The installation took place next, with the ministers gathering around Brother Confidence to pray over him. The congregation prayed also in support. Then Brother Onias expressed his appreciation to both men. The service continued with a congregational song and a vocal solo before the message, which was interpreted by Brother Confidence. Afterward, we had a good prayer meeting and then went outside for photos.

I have enjoyed my time among the saints in South Africa, and am now scheduled to travel to Nigeria on Tuesday. 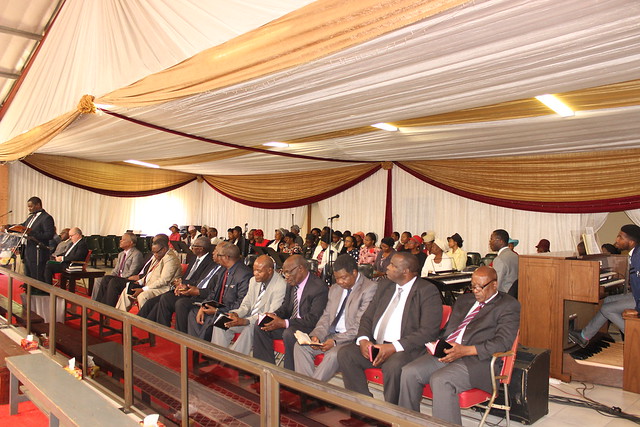