With much anticipation, the Apostolic Faith Church in Oceanside, New York, held their annual youth weekend on May 24-27. The theme, “Fresh Fire,” was taken from Acts 2:17, where Peter reminded the crowd of God’s promise given to the prophet Joel regarding the Latter Rain. The guest speaker was Blessing Mbang, the youth leader in Washington, D.C., who attended with around twenty others from that branch church. Attendees also included young people from Brooklyn, New York; East Bridgewater, Massachusetts; Wharton, New Jersey; and some from Canada and Wisconsin.

Sister Blessing gave a powerful message on Friday evening titled “Follow Me.” Taking her text from Matthew 4:18-19, she emphasized that the process of “Fresh Fire” begins with following Jesus and receiving salvation, which includes a full surrender and obeying His instructions. She challenged the young people to live lives of victory and eliminate anything in their lives that is in competition with giving all to God.

The Saturday morning activities began with a time of prayer, followed by a Bible teaching given by Sister Blessing. She compared an unsaved person to a hoarder’s house filled with junk, bringing out that receiving salvation is like removing all the junk from the house; it is emptied, but the walls and carpets remain dirty. She stated that sanctification cleanses the house and prepares it for a new tenant—the Holy Spirit. Several young people shared their testimonies, and a wonderful prayer meeting followed.

Afternoon breakout sessions for various age groups emphasized the importance of godliness in relationships, and provided an opportunity for the young people to ask questions in an age-appropriate setting. On Saturday evening, the young people’s choir and orchestra presented a magnificent concert, which opened with the orchestra playing “Stars and Stripes Forever.” Choir numbers included “Give Me Oil in My Lamp,” “Order My Steps,” “My Help,” and “Send the Fire.” A vocal duet sang “I’ve Just Seen Jesus.” Other orchestra numbers included “The Dance of Iscariot” and “Be Thou My Vision.” After resounding applause from the audience, Josephine McElveen, the pastor in Washington, D.C., gave a short message and altar call.

On Sunday morning, Sister Blessing began her sermon with a thought-provoking question, “Who told you it was okay to work for the Lord without the power?” She challenged sanctified young people to diligently seek the Lord to be filled with the Holy Spirit. Many responded and earnestly sought the Lord during the prayer meeting that followed, which continued until just before the next service.

During the evening service, many lined up to testify of receiving a spiritual experience. One young lady said she had made the trip to Oceanside just to see her friends, but conviction settled in her heart, and she prayed through to salvation. Several others testified of being saved, sanctified, and filled with the Holy Spirit.

The weekend concluded on Memorial Day with a picnic at the Hempstead Lake Park. The day was filled with various activities, including playing basketball, eating delicious food, socializing, and above all, sharing the Gospel with other people at the park. Those who attended the special weekend are thanking God for all the blessings poured out, and the prayer is that the young people will be encouraged to wholly follow God’s will for their lives. 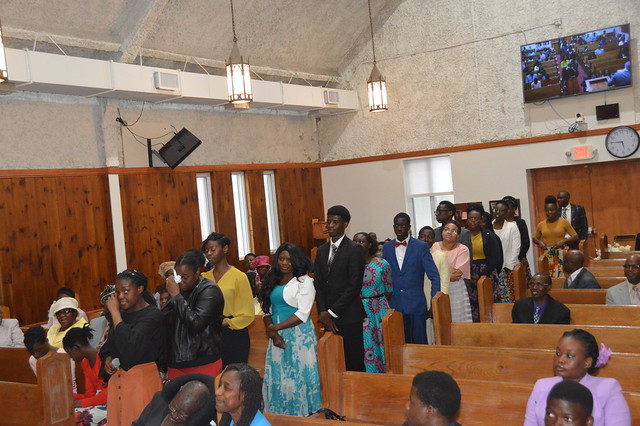