Bill McKibben, Director of Asia Work, and his wife, Lori, are accompanied by Mark Staller, pastor at Tehachapi, California, and his wife, Sylvia, on their current trip to Asia. They arrived in the Philippines early Friday, December 27, and after a rest, had opportunity to fellowship for a time with the District Superintendent of the Philippines, Zenaida Ruiz.

The next day, they were joined by the district pastors at the headquarters church in Bagong Sikat for a training session. During the session, Brother Mark gave a presentation on the basics of public speaking. He encouraged the pastors to use their words in the very best way to bring honor to God and to draw souls to salvation through Jesus. The pastors rejoiced in the training and the encouragement.

On Sunday, the McKibbens and Stallers attended services at the Bagong Sikat church, which is pastored by Joey Ruiz. Sunday school began with several children performing instrumental solos on the piano and violin. Then a children’s choir sang, and prior to being dismissed to classes, a number of action songs were enjoyed by all.

The morning worship service began with a medley of Christmas carols played by the orchestra, and then the choir presented a stirring number. Sister Ruiz welcomed saints from various branch churches as well as the visitors from the United States. In addition to the team from headquarters, Michelle Hancock and her son Michael were present, visiting from our church in Los Angeles, California.

Following the congregational singing and prayer, it was announced that many of our licensed pastors in the Philippines had not yet been ordained with the laying on of hands in accordance with Scripture and Apostolic Faith policy. The significance of ordination was explained, and then the members of the Board of Trustees were prayed for first. Sister Ruiz, Brother Bill, and Brother Mark gathered around them, laying hands on them, and prayed, with the congregation praying also. Then the board members joined in praying for the pastors.

The service continued with a Scripture reading and a choir number before Brother Mark preached. He spoke on the brevity of time and the need to live wisely for the Lord. A sweet time of prayer followed, and then everyone was treated to a full meal.

For the afternoon service, the orchestra provided a prelude and then the young people’s choir sang. After the congregational singing and prayer, several shared testimonies of healing and God’s provision, including Brother Mark who told how Jesus saved him while he was just a boy, and has been with him since. Brother Bill gave the sermon, pointing out that God is the hope and the help for every individual. Once again, a sweet prayer meeting followed the service.

On Monday morning, Brother Mark and Sister Michelle conducted a workshop for Sunday school teachers. As they are both educators at the university level, the workshop was well organized and very informative. About 125 teachers attended from various branch locations.

For her sessions, Sister Michelle focused on teaching techniques and learning styles for sharing the story of Jesus. Brother Mark’s session centered on developing a comprehensive understanding of the Bible. He spoke of the time frames, genre of books, and the importance of knowing the overall message of the Bible along with memorizing Scripture.

The team is scheduled to depart Bagong Sikat on January 1 to visit several branch churches, including those in the towns of San Luis, Siminbaan, and Binalonan. They also plan to spend a night near our church in the summer capital of the Philippines, Baguio City. Please pray for them and the continuing work of the Gospel in the Philippines. 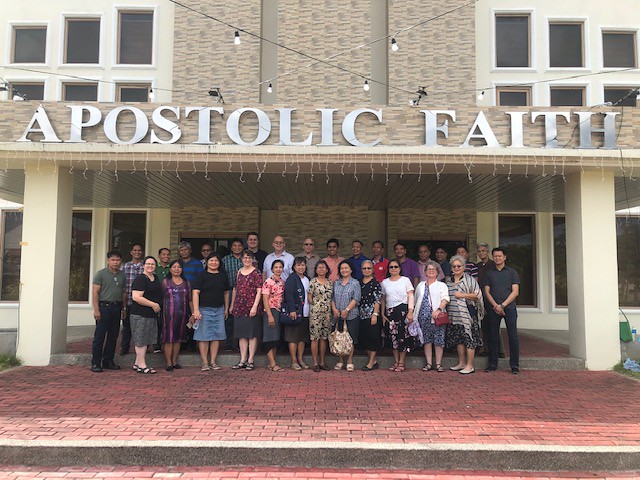