Bill McKibben, Director of Asia Work, and his wife, Lori, are in the Philippines. They arrived early Friday morning on the island of Luzon and were met by a small delegation including Zenaida Ruiz, the Philippines District Superintendent. That evening, they attended the prayer meeting and devotional service at the headquarters church in Bagong Sikat where Sister Zenaida is the pastor.

Brother Bill said they were inspired by the message of not being overcome with fear and also by the number of young people participating in the service. He said God is establishing a new generation of ministers and workers who know and love His Word.

The next morning, a ministers’ meeting was held with nearly thirty in attendance from all over the island of Luzon. The main topic was “The Great Commission,” found in Matthew 29:18-20. One discussion centered on ways to find points of contact specific to the culture, as Paul did on Mars Hill, to share the Gospel more effectively. Following the meeting, lunch was provided, and everyone enjoyed barbecue chicken and pork adobo.

Meanwhile other groups of workers were also meeting, including the choir to practice for the Sunday services, a planning committee to prepare for the upcoming Easter camp meeting, and the Sunday school teachers for Round Table.

Sunday’s activities began with an overflow crowd for the Sunday school general assembly at the Bagong Sikat church. The children sang energetically, recited verses, and provided specials. Then the different age groups were dispersed to their classes.

For the morning service, the congregation was even larger, making it necessary to open the balcony and overflow areas. Of the estimated 500 in attendance, many had traveled four to five hours to be in the weekend meetings, with fifty coming from our northernmost churches in the province of Isabela.

The prelude included a trumpet, double bass, and trombone ensemble followed by a violin solo. Brother Bill said the church has developed a nice orchestra, which also includes cellos and flutes. Before the message, an octet sang a touching “Thou, O Lord” from Psalm 3. The sermon, taken from Joshua 1:1-9, brought out that God is still alive and works with every generation. The altars filled at the conclusion, and fervent prayers were made with some receiving blessings from the Lord. Afterward, all gathered for a meal to celebrate the first anniversary of the new headquarters church building, which was dedicated last year at this time.

Another service was held in the afternoon. During the testimony portion, Sister Lori told of God’s goodness to her from before she was born, through the lives of her great-grandparents, grandparents, and parents, and of that goodness now extending to her grandchildren. Other testimonies included one from a brother who thanked God for His protection on the job when there were several accidents. Also, a sister praised the Lord for baptizing her with the Holy Spirit that very morning! Brother Bill preached from Isaiah 6:1, noting that Isaiah saw the Lord. He encouraged the congregation that God still wants to reveal Himself in His holiness. Another good altar service followed.

The McKibbens plan to remain in the Philippines through February 16, and covet our prayers for God’s continued blessings. This coming Wednesday, Brother Bill is scheduled to speak during the Baccalaureate service at the Central Luzon State University where many of our saints work, are students, or are alumni. We pray God will use that opportunity to speak to the hearts of those who attend.

(Click on image below to scroll through photo album) 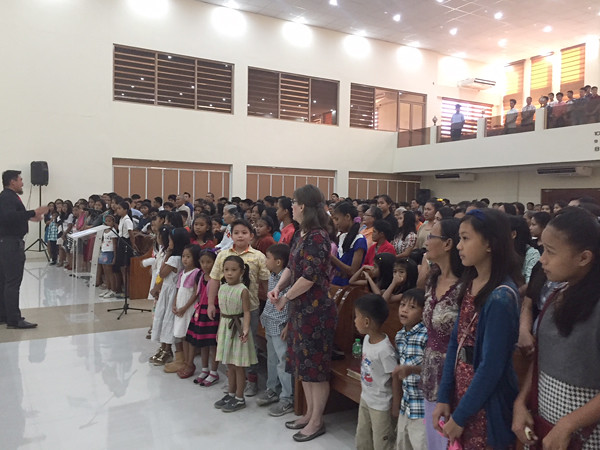