Hoping for greater blessings and graces from the Lord, the Apostolic Faith churches in the Philippines held their 19th youth camp from May 21-25, 2018. The theme this year was “A Challenge to the Youth: Be a Man and a Woman of Integrity for God’s Glory,” and the event was held at the CJ Waterpark Resort in Bongabon, Nueva Ecija, Philippines. There were 127 young people in attendance from different branch churches, which was fewer in comparison to previous years, yet the Lord was faithful to pour out His blessings and spiritual graces to every hungry soul.

The camp started with an afternoon opening ceremony in the chapel of the headquarters Philippines church in Bagong Sikat. The older attendees, called “big brothers and sisters,” led the congregational singing and opening prayer, with opening remarks from Jed Torres, the pastor of the Binalonan church. The camp rules and regulations were delivered by the camp directress, Cristine Villamar, and this was followed by a short message of encouragement from Tess Torres. The ceremony was ended with a solemn prayer led by Nena Villarta, and the campers were served their first dinner before starting the hour journey to Bongabon aboard two big trucks.

The second day started at 6:00 a.m. with the first devotional time or “quiet moment,” in which groups of about twelve gathered in small cottages to talk about the power of integrity and how a Christian should manifest good conduct even when no one is watching. Breakfast was served each day after the quiet moment sessions.

At 9:00 a.m., the first Bible study was delivered by Guadalupe Miranda, pastor of the Maragol church, on the topic “Think Before You Click: Integrity in Social Media.” She encouraged everyone to be responsible with the use of social media, enjoying its benefits without compromising the values of a faithful follower of Christ.

At 2:00 in the afternoon, the first group enrichment activity was held, the “Bibliolympics” headed by Harold Ray Landingin. This consisted of word puzzles and word games involving questions about the Bible and some facts about the Apostolic Faith Church and its history. By the end of the activity, the campers had learned a lot and also started to be more at ease with one another.

At 7:00 p.m. an evening service was held, showered with inspiring testimonies from the youth. A number testified about receiving the baptism of the Holy Ghost and how they were able to do things they never thought possible.The speaker that evening, Emelita Torres, pastor of the Tabulac church, talked about surrendering everything to the Lord—all the worries and cares the youth might be facing. It ended with a glorious prayer service, bringing the campers into deeper relationships with Christ.

The third day began with another quiet moment, this time with the topic “How Do You Demonstrate Integrity?” Simply put, demonstrating integrity means being doers of the Word and not hearers only, and it was brought out that seeking the Lord’s graces will greatly help individuals to be men and women of integrity.

The second Bible Study was about “Taking a Stand: Integrity in Your World” and was taught by Fernan Fiegalan, the pastor of the Bulacan church, and his wife Elaida. They reminded the group that the Lord’s system differs from the world’s system, and Christians must obey the Lord’s system by having consistent character wherever they are and whomever they are with. At the end of the session, the speakers pointed out that in serving the Lord, one must be “whole,” which comes from the root word “integer,” and willing to take a stand.

The team building activity on day three was different than previous years as the campers were taught how to budget a small amount of money and to cook a traditional meal using a piece of bamboo and a clay pot. It was really fun and each team was able to come up with a great dish, which they enjoyed during dinner.

In the evening, a “Night of Praise” was held, led by Robert Ruiz. It was wonderful to hear the youth singing praises unto the Lord in the best way they could. That evening, the Spirit of the Lord filled the whole place, bringing everyone to their knees, as many submitted themselves to the Lord and gave Him the worries and frustrations that would hinder them from serving Him fully. A lot of consecrations were made at the altar that night.

On the fourth day of camp, a “Color Run” was held at 5:30 a.m. This was a great start for the day and all the youth really enjoyed it.

The third Bible study was titled "Being in Love: Integrity in Relationships,” and was presented by Joseph Ruiz, pastor at La Union, and his wife Genevieve. They talked about how to have integrity in romantic relationships, teaching how to differentiate the true love that comes from God from its counterfeit: infatuation. The young people were also warned that “being in love” is not an excuse to compromise integrity.

In the afternoon the campers competed in an “Amazing Race,” facilitated by Brother Jed. Groups raced to complete activities at ten stations, some of which required practical skills such as welding, plumbing, and electrical and mechanical work. Other stations required artistic or athletic talents like painting, music, and water activities. Before starting at each station, the groups had to recite a Bible verse related to the station, which had been given to the groups during the orientation.

That evening, a “Night of Talents” was held. Everyone was nervous and excited to showcase their talents. Some performed spoken poetry, some sang, and most acted, but each group focused on integrity as the basis of their performance. There were serious presentations as well as comical skits and even romantic comedies. All in all, it was a night of fun and excitement.

The last day of camp began at 5:00 a.m. with a trust walk activity led by Brother Jed. Participants walked blindfolded as they followed a path guided by plastic strings. The path ended at an altar where God’s sweet presence dwells, as someone read aloud "A Letter from God," based on the Book of Psalms.

A water baptism was held at 8:00 a.m. The message was delivered by Reynald Gapuz, the pastor at Baretbet, and the baptisms were conducted by two other Philippines pastors: Levi Dollente of Kaliwanagan and Brother Jed. Everyone gathered around the pool singing songs of praises as eighteen young people were baptized in the water.

The closing program began at 9:00 a.m., led by Brother Robert. It included singing and testimonies from newcomers to the camp, those newly baptized in water, and those who had received deeper experiences at camp. An awards ceremony followed, including the “Kalabasa Award” just for fun. After that, Brother Joseph gave an inspirational message asking the campers if they were happy, and sharing with them a reason he has to be happy—God had assured him of His love through a message from two young people who did not know how much he needed to hear it. Unexpectedly, the Lord’s Spirit continued to fall upon the young people during the closing program, and instead of ending with their favorite farewell song, “Smile,” it ended with an altar call as even more souls received blessings from the Lord. It was a great revival and preparation for the coming year. 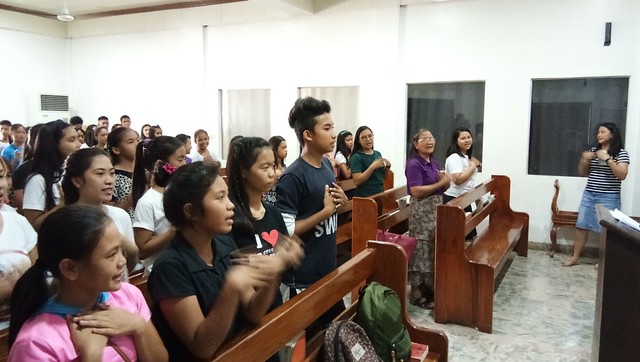