Bill McKibben, Director of Asia Work, and his wife, Lori, have been representing headquarters this past week at the South Korea camp meeting. It began on Thursday, August 3, at our Seoul church and continued through Sunday, August 6. Brother Bill sent this report:

While it is usually hot in South Korea during August, this year was unseasonably hot and humid even by their standards. We were all very thankful for the air-conditioned sanctuary and fellowship hall. In each service, a vocal prelude was followed by a combined orchestra piece, and the combined choir provided the special before testimonies. These sweet and beautiful praises to the Lord set the tone for God’s blessings during the services.

Thursday evening, Young Doo Ra, pastor of our Daejeon church, brought the message about Elisha following Elijah even though he faced obstacles. It was noted that if we also will follow faithfully, God will give us a “double portion” of His blessing. A wonderful altar service followed the opening meeting.

Friday morning, the saints were especially encouraged by one sister who testified that after attending church for nearly ten years, she was finally stirred and received salvation. She praised God that since then she has been sanctified, and while attending the recent Portland camp meeting, she received the baptism of the Holy Spirit. The Bible teaching was on “Overcoming.” This theme has been the hallmark of the preaching in our Korean churches for nearly fifty years since Reverend Harold Barrett and his wife, Sally, brought the message of the Latter Rain Gospel to South Korea.

The afternoon was highlighted with a youth forum followed by a ministers’ meeting. In the evening service, Mi Jeong Park from Daejeon brought the message from John 17. She noted that Jesus prayed for us then, and continues to love and pray for us now, even as He is seated next to the Father in Heaven.

The teaching on Saturday morning was given by our Seoul church pastor, Jeong Min Kim. He emphasized that as we wait on the Lord, we can be used in his great plan. He used the Old Testament example of Joseph, and the New Testament example of Paul and Silas going to Macedonia. All were encouraged to wait on God’s plan for their own lives. Many prayed deeply following this teaching.

In the afternoon, the saints gathered to observe the Lord’s Supper and the Washing of the Disciples’ Feet according to Jesus’ command. Sang Gyu Kim, pastor of our Busan congregation, gave the first sermon, and Dae Seo Goo from Daejeon gave the sermon on the foot washing.

Delegates from our South Korean churches were present throughout the camp meeting, but many more arrived from out of town on Saturday, and the church was full for the evening service. The extended prelude included a ladies’ group from our Okpo church followed by an orchestra and choir number. After a rousing song service and the congregational prayer, an announcement was made concerning the retirement of Brother Kim from pastoring the Busan church, along with several pastor changes. The congregation responded with a unified “Amen” in support of Brother Kim and those who would be relocating. It was noted that God has promised to go before us, and will do so as changes like this take the Gospel forward into the next generation. The evening sermon, taken from Zechariah 7, was on executing true judgement. As followers of Christ we are called to live the truth every day and to be reflections of God’s nature and character.

Sunday morning began with Sunday school for all ages and then the morning service started with a lovely prelude by the orchestra followed by a mixed ensemble singing “It Is Well with My Soul.” Later in the service, a combined choir from the branch churches sang a medley of “We’ve a Story to Tell to the Nations” and “There Is Power in the Blood.” The closing sermon of the camp came from James 1:22-24, encouraging all to be “doers of the word and not hearers only.”

After the prayer service a wonderful time of fellowship was enjoyed over lunch before a group photo was taken and many departed to their homes and places of responsibility. Pray for the saints here. 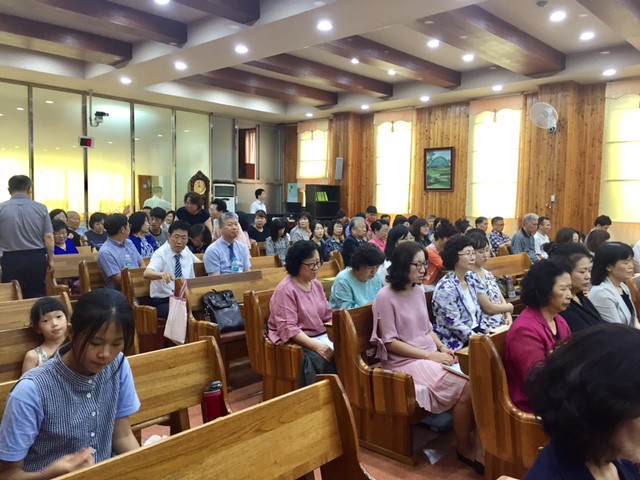