Our team in Cajamarca continues to enjoy participating in the Peru camp meeting, and has sent this report of Tuesday and Wednesday’s activities.

The Tuesday evening service opened with prayer requests, followed by a violin and guitar duet of “Amazing Grace” and “Life is Like a Mountain Railroad.” After the congregational singing, a woman from Yanna Concha, and another from San Luis, testified to God’s saving and keeping grace. Before the message, Justin and Erin Green sang “My Jesus I Love Thee” in Spanish. Then Steve Mixer gave a teaching on salvation, drawing from several texts, which included Luke 18:10-14 and 2 Corinthians 5:17.

On Wednesday morning, after a time of prayer, we set out to distribute Gospel literature and camp meeting flyers in the main plaza and around the bustling commercial areas of Cajamarca (see the photo above). It was a rewarding exercise that brought joy to all involved.

In the evening, the service began with a violin and guitar duet of “Where Could I Go,” Heavenly Sunlight,” and “I’ll Fly Away.” When it was time for testimonies, Delores Antinori praised God for His goodness and help, especially since the passing of her husband, José Arribasplata, last year. Brother José was the pastor of our church in San Lucas.

Another who has experienced God’s goodness was a man from Bella Vista, Combayo. He testified that his son broke his leg, and their family could not afford to pay for his surgery. However, when they prayed, the cost of the operation was decreased, and friends offered to help pay the bill.

The final testimony was from Sister Erin who told how God saved her and had provided for her healing many times. She praised the Lord for performing the miracle that led to the birth of her daughter, Evora. She was not supposed to be able to have children, but the Lord revised her condition and gave her a healthy baby.

Before the message, the Greens sang “Nearer, Still Nearer” in Spanish. Then Brother Steve gave the teaching on sanctification. Taking his text from Hebrews 13:8-12 and Isaiah 6:1-8, he pointed out that sanctification brings us into unity with God and His people.

The altar services on both days were very encouraging with people tarrying long at the altar. We are thankful for the presence of the Spirit of God in these meetings. 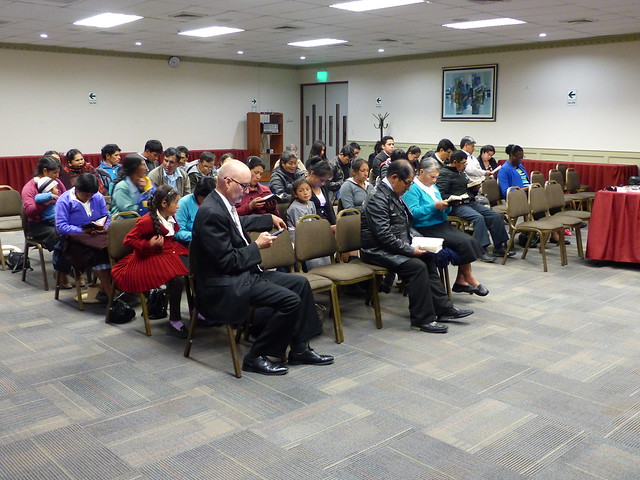