Following the Australia camp meeting in Sydney, Sam and Shade Ajayi traveled to Melbourne for a weekend of special meetings there. Brother Sam sent this report of the services.

We are thankful to the Lord that the overall revival spirit that marked the Sydney camp meeting carried to the Melbourne Weekend of Revival. For those returning home to Melbourne, the long drive did nothing to dent their enthusiasm for more of God. A good number of brethren from Sydney also came with a hunger for more—some arriving to the opening meeting directly from the airport.

The first half of the Friday evening service was devoted to a music event, which was an extension of the Sydney camp meeting concert. The evangelistic message that occupied the second half of the meeting was taken from Luke 18:35-43. We were admonished that if we would call on Jesus with determination and purpose of heart as the blind man did, we too would receive our desired help from Jesus.

As the service was being conducted, a woman who was walking by came in and sat down. Afterward, she prayed fervently, and later expressed joy that she had attended.

On Saturday, the service began several hours early due to a scheduling conflict over the meeting hall. However, this turned out to be a blessing in disguise from the Lord. The message drew from Genesis 21:6 and 1 Samuel 2:1-4. We heard that God overturned the sadness of Sarah and Hannah, and He will do the same for us because He delights in us. We had a good altar service, and then there was time for a water baptismal service.

All of us went to the beach for the baptism of the young brother who received salvation on the last day of the Sydney camp meeting. It was a joyous occasion as several passersby stopped to witness the event and take pictures. Following the service, we had a picnic-type fellowship at the beach, and it was a blessed and fun time.

On Sunday morning, the adults and children went to their separate Sunday school classes. Ernest Akerejola, the Sydney pastor, taught the adult Sunday school lesson on “Wisdom.” He told the class that the same God who availed for Shadrach, Meshach, and Abednego would help and grant us wisdom if we too will seek Him.

The Sunday morning sermon was taken from Luke 15:13-24 and Jude 1:3. We were encouraged that God’s salvation and its awesome power is the same everywhere, in every period—without variation. However, we must apply ourselves to consider, seek, and receive it. If we do, we will be able to testify, like all who have received it, that it is the best gift ever!

We heard a good number of testimonies during the revival services. During the Sunday devotional service, Sibonakale Tshuma testified to the power of God to heal and to direct. She said that after she was saved, she prayed about whom to marry. She prayed that the Lord would give her someone who loved God more than her. The Lord answered, and they celebrated their twentieth wedding anniversary this year. When she delivered her last child four years ago, there were some complications and she was admitted to the hospital. The doctors prescribed medication and said she would be on it for the rest of her life. She asked the Lord to intervene, and He did. At her last medical review, the doctor said she didn’t need to take the medication again. She is thankful for God’s faithfulness.

Another sister testified about how God has blessed her family in amazing ways. He provided a first car for her family and He saved her son at the Sydney camp meeting. She also thanked the Lord that her first trip outside of Australia, since she relocated there, was to the Portland camp meeting.

A brother thanked the Lord for saving him and changing his life when he was not expecting it. He thought he was okay, being an altar boy at his church, but brethren from the Apostolic Faith witnessed to him. When they referred him to John 3:16 and then to 1 John 3:9, “Whosoever is born of God doth not commit sin,” he became convicted and sought salvation. He is glad that the Lord saved him, changing his life completely, and has given him what he read about—victory over sin.

At the concluding service, we sang “Glory, glory, glory, somebody touched me. It was on a Monday . . .” As each day of the week was sung, anyone saved on that day stood as a form of testimony. It was a blessed time indeed. The last message of the revival services was from John 13:2-4. We were encouraged to diligently keep the things the Lord has given us during the camp meeting and the revival services. We were cautioned against letting the devil rob us, and told that if we ask the Lord for help, He will keep us until He returns. An intense prayer session followed, as everyone wanted a parting gift of blessing from the Lord.

We are so thankful for all the blessings the Lord poured down upon us during both the Sydney camp meeting and the Melbourne revival weekend. We have been greatly fortified.

We thank the Lord for the victories won in Sydney and Melbourne these past two weeks. The Ajayis are now in Perth, Australia, and we pray the Lord will prosper the Gospel message there as well.

(Mouse over the photo below to click through the album.) 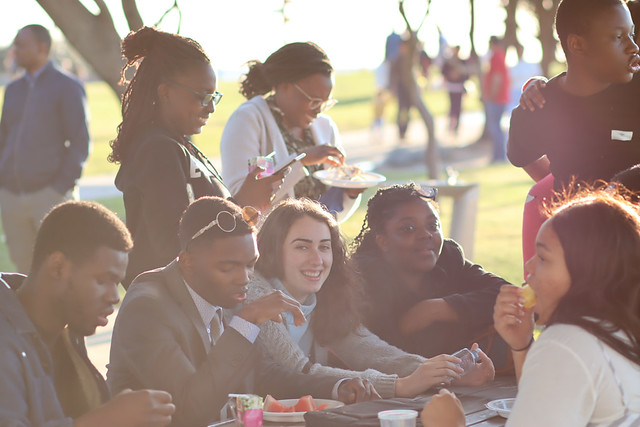