John Musgrave and Harlan Lee continued visiting locations in Romania this past week, accompanied by Ted Bora and Gheorghei Macovei. On Tuesday they traveled south into the Oltenia region of Romania to visit our churches there.

Their first stop was in Capu Dealului to visit with pastor Nicu Cacalete and his wife, who hosted them for dinner. While there, they toured a nearby piece of property that has been acquired by the congregation. Brother John said it is in a good location close to the center of town, and the group is in the process of reviewing design options for a church building.

The next day, the team traveled to Margaritesti for an evening service. Though the temperature was around twenty-five degrees, this did not deter the twenty to twenty-five who gathered to worship. Brother Harlan commented that this was a testamony to their hunger for God. During the service, several young people participated in the music, including providing specials. Brother John said a sweet Spirit was over all, and this led to a good altar service with the entire church praying. Afterward, the team enjoyed a traditional Romanian meal provided by the pastor, Aurel Cruceru, and his wife.

On Thursday, the team went to Motatei Sat for a morning service. Though it took place during work and school hours, fifteen were in attendance. They met in a side room of the church in an effort to consolidate the heat. The building is under construction, and the pastor, Mitita Udrea, hopes to have it complete in time for the May dedication. The saints were attentive to the Word and at the altar call, everyone went to their knees for prayer.

An evening service was held in Craiova with forty-five in attendance. During the testimonies, two gave God glory for healings. One, who had requested an anointed handkerchief for his father the day before, testified that his father was out of the ICU and had been released from the hospital. The other thanked God that his grandmother, who was not expected to live, was now doing much better. Brother Gheorghei also testified, saying he received a touch from the Lord in Comlosu Mic regarding his back.

Brother John preached from Psalm 33:18, “Behold, the eye of the Lord is upon them that fear him, upon them that hope in his mercy,” and also gave a testimony of recent healing in his family. The saints responded well to the message and requested another. Brother Harlan preached the second sermon, focusing on those in the Bible who received healing from Jesus, including the woman who touched the hem of His garment and Bartimaeus. Before the invitation to pray was given, a man made his way to the altar. Then at the close, several more rushed forward. The rest of the congregation joined them. A few were in need of salvation, and all prayed earnestly. About fifteen were anointed and prayed over, and after the prayer service, many raised their hands to acknowledge having received something from the Lord. 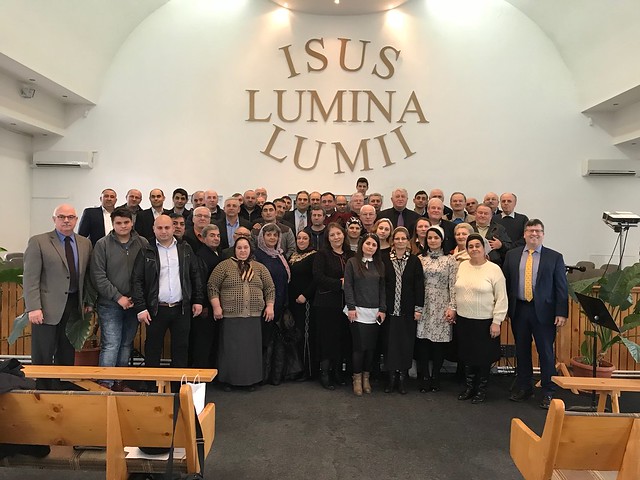