Romanians Inspire with a Hunger for God

They arrived on Thursday, April 11, and were met at the airport by Gheorghei Macovei and Ted Bora, the District Superintendents for Eastern and Western Romania, respectively. They went immediately to the Bucharest church where Brother Gheorghei is the pastor, and joined in the evening service, which had already begun.

Brother Joel said the girls, Charlet and Hannah, provided a beautiful duet of “Amazing Grace,” and much of the congregation sang along. Ryan followed with his testimony and a short exhortation, which Brother Ted translated. Then Brother Macovei closed with a few words of encouragement. It was a blessed service, and everyone went to prayer afterward.

The next day, the team of six traveled to Rimnicu Sarat for another evening service. As they arrived, the congregation was singing hymns. Though the regularly scheduled service had been the evening before, there were many in attendance again.

Introductions were made and then the congregation provided several musical specials. During the announcements, Brother Joel conveyed greetings from Portland and shared what God is doing in his life. As in the previous service, the girls provided a vocal duet, this time singing “Your Love Defends Me.” As they sang, a brother began to accompany them by ear on the piano, and a sweet spirit settled over the congregation.

Next, Brother Ryan preached about Jesus healing the lame man at the pool of Bethesda. He brought out that each individual has direct access to the Lord. As Brother Macovei closed the meeting, the presence of the Lord could be felt strongly, and everyone went to prayer eagerly. After the prayer service, the saints served light refreshments and everyone enjoyed a time of fellowship.

On Saturday, the team went to Bosteni for a morning service. They said the building was humble on the outside, but the inside was full of God’s Spirit, and the saints received them warmly. Brother Joel again brought greetings from Portland and shared some of his testimony. He also noted that Christians all over the world are one in the Lord, regardless of the physical distance that separates us.

The service continued, following the outline of the previous two, with the exception of a baby dedication. A couple brought their baby, Matthew, to the front and after a few words from Scripture, everyone joined in praying that he would be brought up in the nurture and admonition of the Lord.

In the afternoon, the team drove to Humulesti for a service in the home of Brother Boboc who leads the congregation of about forty. Brother Joel said the meeting was filled with God’s Spirit from the start as the congregation focused on every word and song with open ears and hearts. Afterward, there was a time of prayer, and then the girls distributed Snickers and Twix candy bars. Everyone was happy to try a taste of something from America.

This congregation is looking forward to building a church, and has secured a location. Our team went with several of the saints to survey the land and discuss how to get started. Brother Joel said it was a very productive meeting that ended with a plan for moving forward.

The last stop of the day for our team was Vanatori. This congregation also meets in a home, which happens to be under construction. It was cold inside the house due to the unfinished areas, but everyone felt warmed by the Spirit and the fellowship. The main room was full at the start of the meeting, and as the service continued, more and more people arrived. Soon, there was only room to stand outside, which several did. Brother Joel said it was an inspiration to see the hunger the people in Romania have for the Lord.

We are also inspired by our Romanian brothers and sisters in Christ. Let’s continue to pray for the work there, and also traveling mercies for the Andersens and Erdmanns who are now returning home. 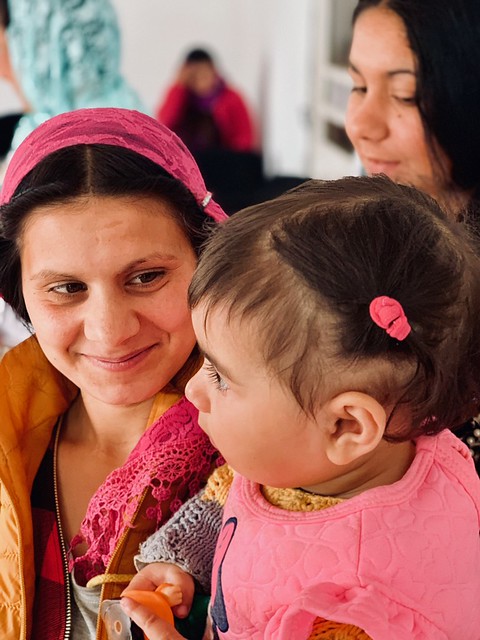