Romanians Rejoice in the Gospel

John Musgrave, Director of Romania Work, and Joel Andersen of Portland, Oregon, are in Romania for a countrywide visit of our churches there. They arrived in Bucharest on Thursday, October 11, and that evening enjoyed a church service with about thirty of the saints. Afterward, Gheorghei Macovei, the pastor and Eastern Romania District Superintendent, invited them to his house for dinner, and they were treated to Sarmale cu Mamaliga (stuffed cabbage and polenta), which is the national dish of Romania.

The next evening, they attended the service at our Rimnicu Sarat church where Crivişiu Ionel is the pastor. The church was full with about sixty in attendance. There were several music specials and then Brother Joel shared his testimony. He told how his parents came into the Gospel and this allowed him to be raised in a Christian home. He also said that he prayed through to a personal experience of salvation and is now raising his own children in the Gospel. After the message, several went forward to pray, including for salvation. In addition, others requested to be anointed and prayed for.

Following the prayer service, no one wanted to leave, so they rejoiced in the Lord a while longer with energetic music specials. Brother John said the time seemed to pass much faster than the actual three hours they were there.

On Saturday they drove to the area near the city of Pascani to attend a service with our group in Vanatori-Neamt. As they arrived, seventy to eighty were gathered for an outdoor service. Several in the group were not saved, and everyone prayed afterward. Brother John said they had a sweet service and noted that the response to the Gospel in this town has been phenomenal. He said what began as home visits in 2015, and then progressed to cottage meetings, has now outgrown every house where meetings have been held.

They remained in the Pascani area on Sunday and attended services at three locations, beginning with the morning meeting in Bosteni. This church of about seventy formed when a few families in the neighboring town of Sodomeni responded to missionary efforts and received salvation. They held cottage meetings and then progressed to meeting in large rooms. Now they have a church in Bosteni and are in the process of remodeling it. The roof was recently replaced, and the sanctuary has been updated and opened to some additional rooms. Brother John was happy to see that the work is about seventy-five percent complete, and also that two young men who were saved a few years ago, Amar and Aron, are now serving as youth ministers.

The service included the ordination of Vasile Budeanu, who for several years has been our missionary to the Pascani area, establishing cottage meetings in about forty villages. He led the congregational singing, and his family sang a special. The Spirit was on the service, and during prayer time, came down in a special way.

The second service was held in Humulesti where Brother Boboc is the leader. The church is an addition added on to the front of his house. It quickly filled with some standing inside while others stood outside. They enjoyed a wonderful service that concluded with a woman coming forward to pray for salvation. As our team prayed with her, the congregation also prayed in support.

Our team next visited a family facing some discouragement of late. They were able to encourage and pray with the family, who committed to making church attendance and fellowship a priority.

The final service of the day was in Vanitori, west of our other location here. The saints quickly prepared a room that had been added on to the front of a house. As the meeting progressed, more and more people arrived until the small area inside was filled and several more were standing outside listening in. Brother John was impressed by the happiness of the people, saying it stood in contrast to the harsh and impoverished living conditions in this village. Following the service, there was a good response to the invitation to pray and then after a time, a baby dedication was held.

Our team then went to view a small house of about one hundred square feet, where a grandmother is raising twelve grandchildren. The house is made of decaying mud bricks, which are falling and causing an unsafe environment. Next door, a new house is being built, and when complete it will provide a safe place for them to live. Before leaving town, Brother Macovei met with a city official who has offered to help us obtain a piece of property for the purpose of building a church and school in this area.

On Monday a visit was made to Valea Lui Liman, where our Romania youth camp has been held every August since 2003, and today, our team is traveling to the province of Arad for a combined service at the Zadareni church with the saints from Sampetru German. As we look forward to that report, let’s remember to pray for safe travels and open hearts to receive God’s blessings. 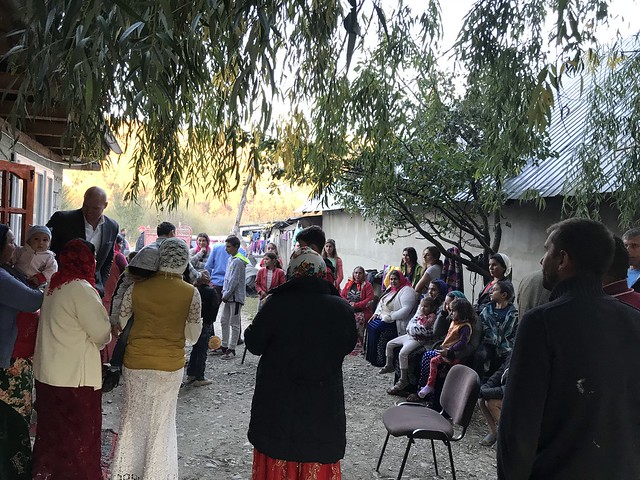