Romanians Rejoicing in the Goodness of God

Debbie and I are in Romania with John Musgrave, Director of Romania Work, and his wife, Rodica, for the dedication of several churches. We arrived Tuesday afternoon in Bucharest and were greeted by Gheorghe Macovei, the Eastern Romania District Superintendent. He and his wife, Crina, became our hosts, giving us a tour of Bucharest, which has a population of about 2 million people.

The next evening, we participated in the dedication service for our church in Margaratesti, located about a forty-five-minute drive southeast of Craiova, the center of our southern Romania work. There were about seventy in attendance, including the town mayor and his wife, who arrived just before the dedication message. The congregation was made up primarily of farmers, and many had walked to the service. The pastor, Aurel Crucero, opened the meeting by welcoming everyone and giving a brief history of the Margaratesti work. This was followed by several music specials, including numbers by the youth group and a solo by our interpreter, Ted Bora, who is the Western Romania District Superintendent.

During the testimony service, Debbie spoke of her heritage in the Apostolic Faith Church. Sister Rodica also testified, and then Brother John was asked to share how they met. He told how the Lord brought him back to Portland on the same day Sister Rodica arrived: February 23, 1983. He also shared a brief history of the Apostolic Faith Church and how it eventually led to the work in Romania and then Margaritesti.

The Margaritesti work began in January 2009 with a small group of people meeting in a tiny chapel provided by the city. The chapel still stands next to the new church building, which was constructed in 2013, and serves as a multi-purpose room as well as a Sunday school department. As Brother John spoke of the congregation’s humble beginnings, the handful of people who had made up the original group shed tears of gratitude for the beautiful new church they have today.

The dedication message pointed to Solomon’s prayer in 2 Chronicles 6:40 and the Lord’s answer to that prayer in 2 Chronicles 7:12 to both illustrate and encourage the congregation to know that they can expect God to hear and answer their prayers and the prayers of those who will attend the Margaritesti church in the future.

Brother John gave the dedication prayer, and we closed with an altar service. Afterward, everyone was treated to sandwiches and dessert provided by Brother Aurel’s wife, Helen.

On Thursday, we first went to Capu Dealului, located about thirty miles northwest of Craiova, where a congregation meets in the home of Nicu Cacalete, the pastor. Here we looked at a plot of land where they plan to build a church. Then we went to Brother Nicu’s house for a short time of prayer before being treated to lunch outside. The weather was exceptional with the temperature in the mid-eighties.

In the evening, we went to Craiova for the dedication of our church there. Craiova is the sixth largest city in Romania with a population of about 270,000. Our congregation there makes up the largest Pentecostal church in the Oltenia Province. It is pastored by Pavel Balanoiu, who oversees our southern Romania work.

There were about 100 in attendance for the dedication, filling the sanctuary. The service followed a similar format to the dedication in Margaratesti with testimonies, music specials, and histories of the work given. However, as there were several visitors in need of salvation, the dedication message focused more toward the need of personally dedicating one’s life to God. Everyone was encouraged that God could save them, causing them to become merry and glad, as they enjoy His goodness.

A short time of earnest prayer followed the meeting, and then refreshments were served. We trust that some were able to pray a sinner’s prayer, and that souls were added to God’s Kingdom. Certainly everyone left merry and glad, rejoicing in the goodness of God. 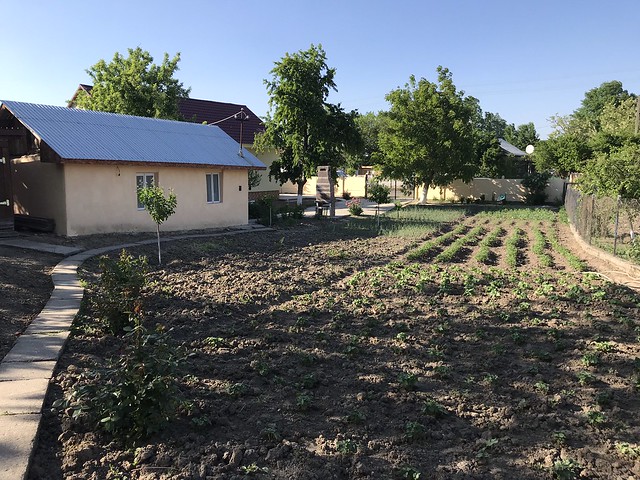