Debbie and I enjoyed being at in the Scandinavia camp meeting, which began on Wednesday, April 18, at the Ognatun campground in Norway. The schedule included morning prayer meetings and Bible teachings, afternoon Bible studies and youth activities, and evening church services.

Each day had its own theme, and Thursday’s theme was “Faith.” Debbie was asked to participate, and gave an object lesson demonstrating faith. She blindfolded Gabriel Kinnari, and then asked him to trust his mother, Marianne, to lead him about without allowing him to trip over anything. The point was made that God sees what we cannot, and He will lead us on the best path if we will put our trust in Him.

In the afternoon, the youth had an activity and then for the Bible study, Keijo Kinnari gave a presentation, including photos, on how to exercise faith. One of the photos was of himself, crossing a large boulder wedged between the tops of two cliffs. It illustrated that faith can be a bridge to what may seem impossible.

In the evening, we observed the ordinances of the Lord’s Supper and Foot Washing, and afterward enjoyed a time of fellowship through song.

Good Friday was a bright and sunny day at the Ognatun campground. The theme was “Hope,” and Brother Keijo gave the morning's teaching. There was also an object lesson provided by Jorma Kinnari that involved a lamp, a bulb, and a power source. He demonstrated that we have hope when we are plugged into the real power source: the Holy Spirit.

For the afternoon Bible study, Brother Keijo and Seun Ogunleye gave instruction on how to apply faith in a changing world. We were reminded that as our society changes we will face new and terrible challenges, but God’s love and the Gospel will continue to remain constant.

The evening service was filled with beautiful music including a flute duet by twin brothers, a choir number, and a quartet of the Kinnari sisters. The Good Friday message focused on the thief on the cross who experienced forgiveness. It brought out that to hear about Jesus is one thing, but to experience Him and the life-changing salvation He offers is quite another.

On Saturday, musicians from the United Kingdom provided the music specials. The theme for the day was “Love.” Brother Seun gave the morning teaching using 1 Corinthians 13 and the epistles of St. John as his text. Trisha Cripps gave an object lesson, speaking on love while distributing a chocolate and recipe for love to everyone in attendance. The recipe called for one cup of friendship and two cups of forgiveness among other ingredients.

After lunch, the annual Ognatun games were held. Everyone was separated into six teams for the competition. The contests included a blindfolded taste test, the building of a Lego tower, a memory game, a water-carrying event using small cloth towels, the launch of a teddy bear into a bucket fifteen feet away, and Pictionary—with four people holding the same pen. At each station, there was the potential to earn clues for the location of the grand prize, depending upon how the team faired. The winning team took home a large bag of Norwegian treats, and even the losing teams received small bags of treats, but the best prize was the fun everyone had.

Saturday evening, after a choir prelude and congregational singing, the youth presented a program of “Seven Messages from the Cross.” Between Scripture readings and hymns, different children held up one sign at a time with the words forgiveness, grace, care, perseverance, humility, purposefulness, and trust. Then as the choir sang “Jesus, Lover of My Soul,” two of the young people performed a silent skit of the tempter being unsuccessful in preventing a sinner from kneeling at the Cross and obtaining forgiveness. For the sermon, Daniel Nketah reviewed the seven messages, and concluded by asking, “What does the Cross mean to you?” A good altar service followed.

The Easter service began with an orchestra prelude followed by congregational singing, and then the choir sang “Victory in Jesus.” An object lesson was given by Deanna Kinnari. She compared the transformation of a caterpillar into a butterfly to Jesus’ death and the miracle of His resurrection. She said that as a caterpillar is wrapped in a cocoon until the appointed time of emerging into a beautiful butterfly, so was Jesus wrapped in a linen cloth until He rose on the third day in a glorified body.

In the afternoon, we went on a two-mile “Emmaus Walk” to the beach at the Atlantic Ocean. Our assignment during the walk was to team up with another person and together answer the question, “What does an active faith mean to you?” Once at the beach, we were treated to banana bread and lemon cake with coffee and tea, and then after an hour or so of hiking, returned to campground.

Our answers to the “Emmaus Walk” questions were used during the evening service as the topic for testimonies, which served to inspire. We were also inspired by a men’s chorus. The message was delivered by Mark Mfandarahwa of Birmingham, England, and we closed with a good altar service.

On Monday morning, for the final service of the camp meeting, Lene Kinnari and Sister Marianne led the congregation in upbeat songs interspersed with testimonies and short skits. For the first skit, Sister Lene drew pictures and told a story. She said Charlie’s grandmother told him he needed to gain spiritual strength. He didn’t feel he had time to read the Bible, but remembered that when he wanted physical muscles, he gave up an activity to have time to lift weights. He realized he would need to do the same to gain spiritual muscle.

The next skit began with starfish strewn about on the floor as though they were stranded on a beach. A boy came by and told his mother he wanted to save the starfish by throwing them back into the water. She said there were too many to save, but he began picking them up and tossing them back (into the congregation) anyway. The moral was that at least a few were saved by the effort.

The last skit was a drama. It depicted a church reception with coffee and cookies. Everybody was invited, but when a homeless man (Olavi Kinnari) came in, he was shunned. The pastor saw this, and gave all the cookies to the man to show that God is no respecter of persons.

Following the skits, Brother LeRoy gave the closing message centered on the themes from the week of faith, hope, and love. He said Peter lost hope and faith after Jesus’ death and went back to fishing, taking others with him. Then Jesus arrived on the scene and challenged, “Lovest thou me? . . . Feed my sheep.”

Debbie and I had a great Easter season in Norway, and are now preparing to return home.

(Mouse over the image below to click through the album.) 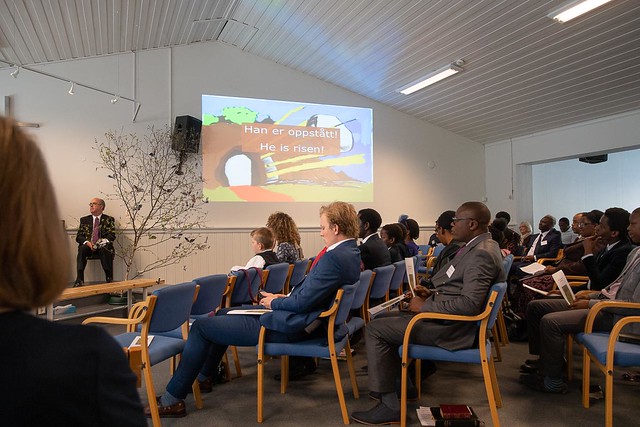