We have received a final report of the Chile Camp Meeting. This first account is from Brother Dial who wrote of the ordinance and water baptismal services on Saturday:

At breakfast Saturday everyone was talking about how the week had flown by, but this second-to-the-last day went the fastest yet! Wrapping up the meal, we quickly walked over to the church site and, as usual, found our saints already busily putting things in order for the first meeting, an ordinance service.

The turnout and the level of participation demonstrated that many deep consecrations had been made this week. The message of the Lord’s Supper was given by Mario Cordova, and the exhortation before the Foot Washing was provided by Israel Monardes. Both portions of the service were blessed—the prayers of the saints and God’s presence were very strong. The fellowship was sweet with unity and humbleness, and afterward many exchanged greetings with hugs.

After lunch and a short break, we reconvened for a baptismal service—the first among our saints in Chile. There were six candidates, ranging from young to elderly. They had each shared their testimonies during the week, so we were able to support them with specific prayers as well as rejoice with them over God’s work in their lives.

The service was held a short drive from town along a beautifully flowing green river. It began with the choir and orchestra serenading with guitars and mandolins. Then Brother Sam addressed the congregation. He reminded everyone that the candidates were taking this step as a testimony to the world that they had had an encounter with God and their lives were changed. He also said that what they were doing was not new. To illustrate this, he pointed to Acts 8:35-38 where the Ethiopian eunuch professed faith in Jesus as the Son of God and was immediately baptized in water by Philip.

Following the message, the song “Shall We Gather at the River?” escorted the candidates to the water where two pastors, Brother Eladio and Brother Israel, baptized them in the name of the Father, the Son, and the Holy Ghost. It was especially moving to see the brethren emerge after full immersion in the river and be received and greeted by the family and guests who had come to support them. I looked around and saw many teary eyes and heard the sound of weeping for joy.

When all had been baptized, the musicians gathered around them for another hymn: “Onward Christian Soldiers.” The congregation joined in, and immediately it felt as if we were back inside the church building. Brother Mario, holding his Bible, lifted his hands and gave a closing prayer to which the congregation replied with a resounding, “Amen.”

To conclude the day, we enjoyed an evening of worship music. As we sang the last chorus, about the river of God flowing over us, the Spirit fell yet again.

Words cannot adequately relay the feelings God stirred in our hearts during today’s special times of worship, so I will summarize with a simple word we heard Brother Elvido interpret for Brother Sam while he was preaching: “Wow!”

Brother Duane had this to say about the final day of camp meeting:

Today, we held the last service of the camp meeting. As we met with the saints in the morning, we hugged and said “Hola,” and in the afternoon, we hugged and said, “Adios.” It is fair to say that this was a beautiful, but bittersweet day for all of us.

Sunday school and the morning worship service were held in the Chimbarongo church rather than the community center where most of the services had been held this week. This gave everyone the opportunity to share in the surprise of beautiful, padded, new chairs. It will also give our Chilean church family a reminder of camp meeting the next time they meet to worship in Chimbarongo.

The Sunday school lesson, led by Sister Carrie, continued a theme from this camp meeting of “Returning a Profit for God.” She encouraged everyone to engage in the lesson, and many participated. We all left with a deeper understanding of what it means to be a wise steward of our Father’s business.

The morning service was beautiful and very encouraging. Upon special request, the orchestra led us in a few of our new favorite songs. This gave those of us from the United States an opportunity to record videos for future memories.

For the message, Brother Sam used the account in Matthew 17:1-6 of the transfiguration of Christ to remind us that we have seen glorious things this camp meeting. He said we have been revived, refreshed, renewed, and reinvigorated. Though we are now walking down the “mountain” after this event, we should never forget what we saw, what we heard, what we felt, and what we experienced.

One of the lovely moments during any service is what I like to think of as “the rolling amens.” Depending upon which language is being spoken by the primary speaker, half of the congregation says, “Amen” first, followed after a minute or two by those who just received the interpretation. On this Sunday morning, as the sermon progressed and Brother Sam got more excited, and Brother Elvido’s interpretation kept up the intensity, the “rolling amens” got closer and closer together until they were falling on top of each other. It was another moment that bound us a little closer together.

After a rousing altar service and then a closing congregational song, we reluctantly left the church for our final lunch, a photo session (you just needed to be there!), and then a round of hugs, Chilean cheek kisses, and goodbyes. Many promises of prayer for each other and commitments to meet in Heaven, if not sooner, were made. Then our team walked away leaving a part of our hearts with our Chilean brothers and sisters after a glorious week together at the feet of Jesus. 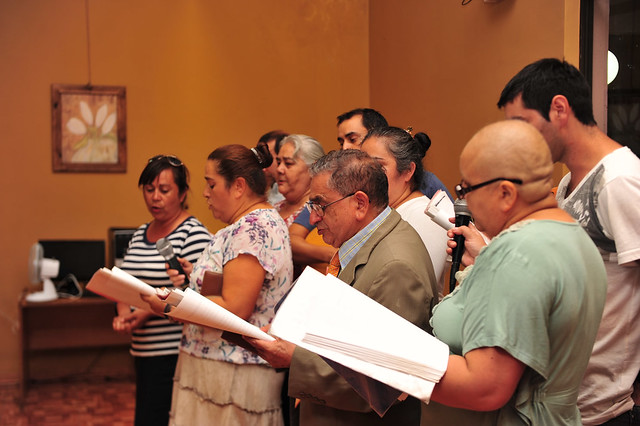