Bill McKibben, Director of Asia Work, is in South Korea for ten days to visit our churches and fellowship with the saints there. He arrived in Seoul on Tuesday, April 16, and was greeted by Jeong Min Kim, the pastor of our headquarters church in Seoul, who would accompany him to our churches and interpret.

On the drive from the airport, Brother Bill noted that the weather in Korea is mild and beautiful this time of year. Many trees are blossoming in pinks and whites while others are sprouting the springtime green of new growth.

The next day, they traveled south to our church in Daejeon, which also maintains a preschool and kindergarten for about fifty students. A tour of the classrooms revealed that they are bright and cheerful.

During the evening church service, the congregation was happy to receive several visitors, including one of the new preschool teachers. The message for the evening was taken from Luke 15 and used the parables of the lost sheep, the lost coin, and the Prodigal Son to point out that everyone is valuable to God. Brother Bill said they enjoyed a sweet service, especially around the altars. He also said that afterward, they shared in God’s goodness by gathering for fellowship over some delicious fruit. Several members of this congregation hope to attend the upcoming Portland camp meeting, and we look forward to hosting them.

Thursday morning brought a return to the school at Daejeon for pictures with each class and to hear more about what the children are learning. Along with core academic subjects, they are being taught God’s Word. We are thankful for this opportunity to spread the Gospel and for the diligence of these teachers.

In the afternoon, Brother Bill and Brother Kim went to Okpo, on the island of Geoje, just south of Busan. We have a small church here, pastored by Kyung Yoon Kang. They had dinner with several of the saints and were also able to visit some of their worksites. They said the joy of the Lord could be felt at each location, as the saints are living out their faith in the workplace.

The next morning and early afternoon were also spent in Okpo with the saints. They had an early lunch and also toured a historical site where there had been a prisoner of war camp during the Korean War. Brother Bill said it was quite sobering to think that over 170,000 POW’s had once inhabited the site. He said that even today, the effects of that war and the ensuing political challenges overshadow much of Korean life. We are thankful the Gospel is offering freedom and hope there.

On Friday evening, the two traveled to Daegu and had dinner with the pastor, Ik Jin Choi, and his wife, and another member of the congregation. After the dinner, there was a time of fellowship at the church. Brother Bill said this congregation is small, but they have an intense love for Jesus. They believe this is a season of hope, and expect to see new growth. He requests prayer for Korea that the Lord will bring hungry hearts into the Gospel.

Brother Bill is scheduled to continue in South Korea until April 26, spending some time now with the saints in Busan.

(Click on the image below to scroll through the photo album.) 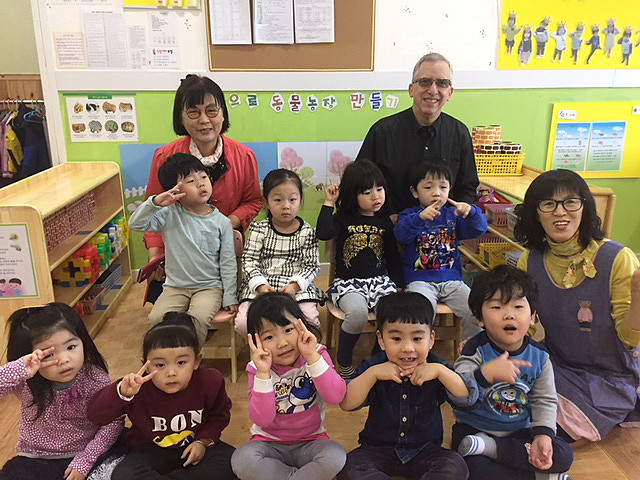